Strong performances save this one. 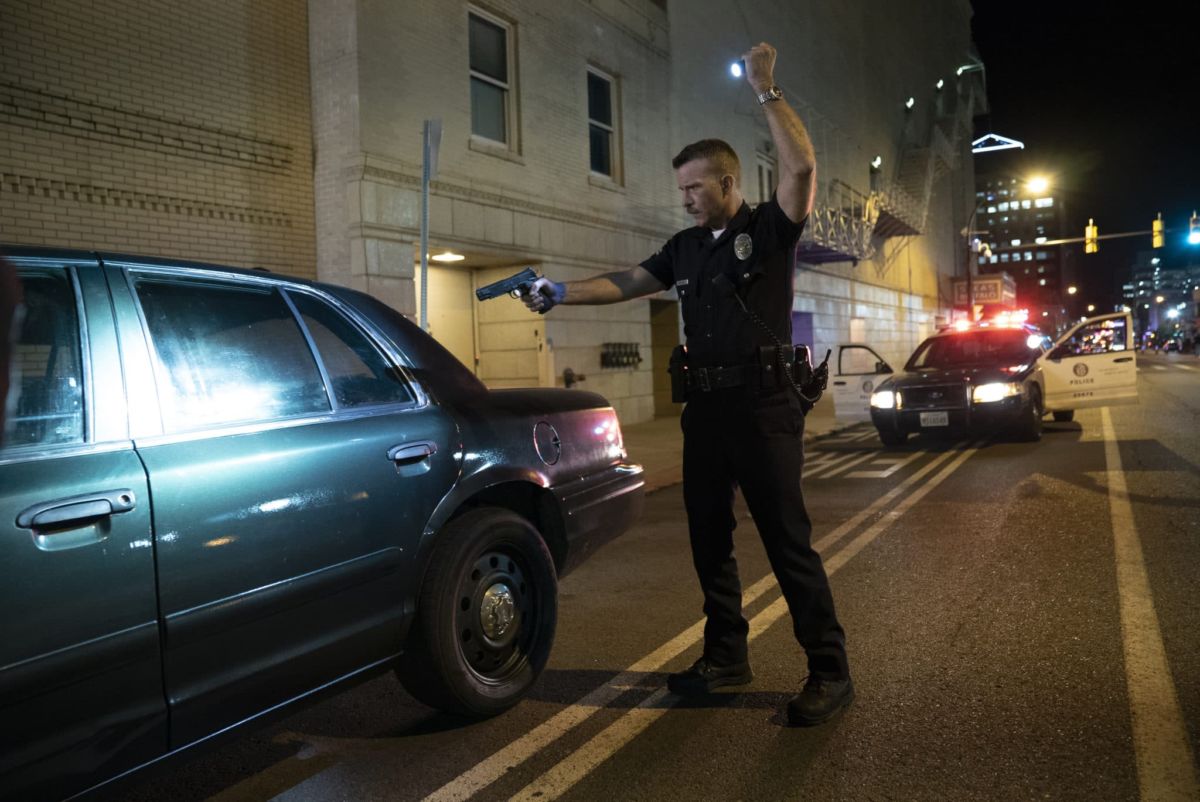 The United States is having a moment when it comes to how we’re viewing police and what they do. A discussion is being had as videos of over-excessive force, brutality, profiling, planting false evidence, coercing false confessions – are spread across the news and social media every day. There’s dozens of videos exposing the hidden cruelties and injustices committed by police, and few end up paying real consequences. It’s interesting, then, that a film like Crown Vic, written and directed by Joel Souza, would come along at this moment in time to give audiences what amounts to a pretty basic cop drama.

There are a couple of attempts made to give this film a reason to be relevant: The title references the Crown Vic model car that police officers used to drive, which are now being phased out. It’s a representation of changing times, specifically when it comes to police work, told through the eyes of Ray Mandel (Thomas Jane), an aging and grizzled LAPD officer, and his new partner, a rookie named Nick Holland (Luke Kleintank), as Nick begins his first night on the job. This one night has it all: Drug busts, shootings, a mentally ill woman, drunk and disorderly Valley girls, having to notify next of kin; you see the good, the bad, and the ugly.

Putting aside the exaggeration of so much going down on this one particular night, Crown Vic is determined to show just how much officers have to go through on a daily basis, and Nick’s crash course becomes the audience’s as well. As he begins to get a better understanding of all that the job entails, Ray makes speeches throughout the film about how much it’s changed, like needing vests and artillery that used to only be reserved for SWAT, or how much more red tape there is to go through nowadays. These ideas are certainly something to contemplate, but your overall enjoyment of this movie will likely depend on where your politics lie.

Ray complains about how every officer has a body cam now, and how much less freedom they’re afforded, among other things. He bends the rules here and there, probably in ways that he shouldn’t. This could just be a case of a character being a character, but the film offers no other perspectives or counter-arguments, so one might assume that these are the film’s stances as well. Ray and others commit acts that some may consider downright criminal, but no other officers speak up or really try to hold them accountable. A case of cops protecting cops, but portrayed in a way that seems to deem it necessary. Again, your feelings toward this film will probably be determined on whether or not you agree with their actions.

There are hints of a more interesting point of view at play – purposeful imagery of police lights flashing and illuminating the homes of poor, non-white neighborhoods, or a powerful shot of a young black boy locking eyes with a conflicted Nick as the two stand over a murder scene – all this teases what Crown Vic could have been, but never quite accomplishes.

Ray isn’t portrayed as a completely morally good person (the film’s tagline reads “Right and wrong isn’t always black and white”), and another cop, Floyd (Devon Werkheiser), serves as a stand-in for every “bad cop” in any police drama. Floyd is a racist, homophoic, violent alpha male, but he’s written to be so cartoonishly over-the-top that the idea behind him nearly gets lost. Mostly, the film is a little clumsy with the ideas it attempts to explore.

Crown Vic’s pacing is episodic in nature, going from one aspect of the job to the next. This can keep your interest well enough, but it reaches a point where it feels directionless. The lack of any real overarching plot both helps and hurts it. There’s a couple of armed robbers who kill some cops in the film’s opening that we cut back to a couple of times before Ray and Nick’s inevitable run-in with them, but I wouldn’t exactly call it a story. The film’s constant nighttime setting and similar-looking locations doesn’t give you much visual variety, and it sometimes has to fight for your attention.

Luckily, Crown Vic is held up by strong performances, particularly from Thomas Jane, who plays Ray in his usual rough, reserved, but reasonable manner. He and Kleintank make a good odd couple, and their clashing personalities helps form a good bit of tension throughout. There are also genuinely fantastic moments, such as a scene where the two come across a burning car. They hang out at the car and chat for a good while before Ray, in a matter-of-fact tone, suddenly says “Ah, son of a bitch. There’s someone in there.” That kind of dark comedy is sprinkled throughout, and when it’s there, it gives us a glimpse at a more fun, thoughtful film. I only wish the whole movie had been like that.

Verdict
Crown Vic has strong performances and some topical observations of modern day police work, but it never goes anywhere interesting enough with them.
5
Cultured Vultures is a pop culture website established in 2013 covering all things gaming, movies, and more. We eat your words.
All The News On The Biggest Games