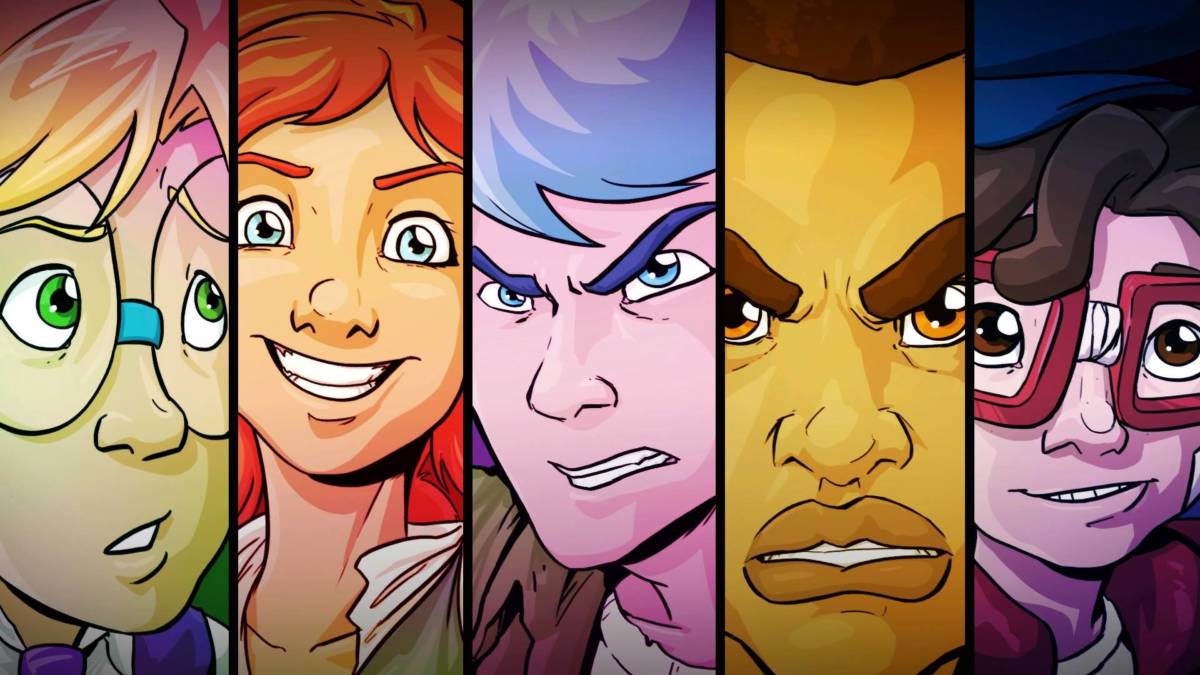 For someone who was born in 1991, I sure have a lot of love for anything from or inspired by the eighties. Give me some synth music and obnoxiously bright clothing and I am all over it like a businessman and his mound of cocaine. Short on yeyo but high on some endearing throwbacks and homages, Crossing Souls is a game that should appeal to me on novelty value alone.

A 2D action adventurer with an effortlessly charming artstyle, Crossing Souls falls into a similar niche as Stranger Things, which seems to be an unavoidable comparison. Both are heavily inspired by the eighties and feature supernatural themes and a motley crew of friends. That’s where Fourattic’s long-in-the-making game is at its best, when it’s focusing on the value of friendship and that feeling of youth that so many of us just want to bottle and keep forever. 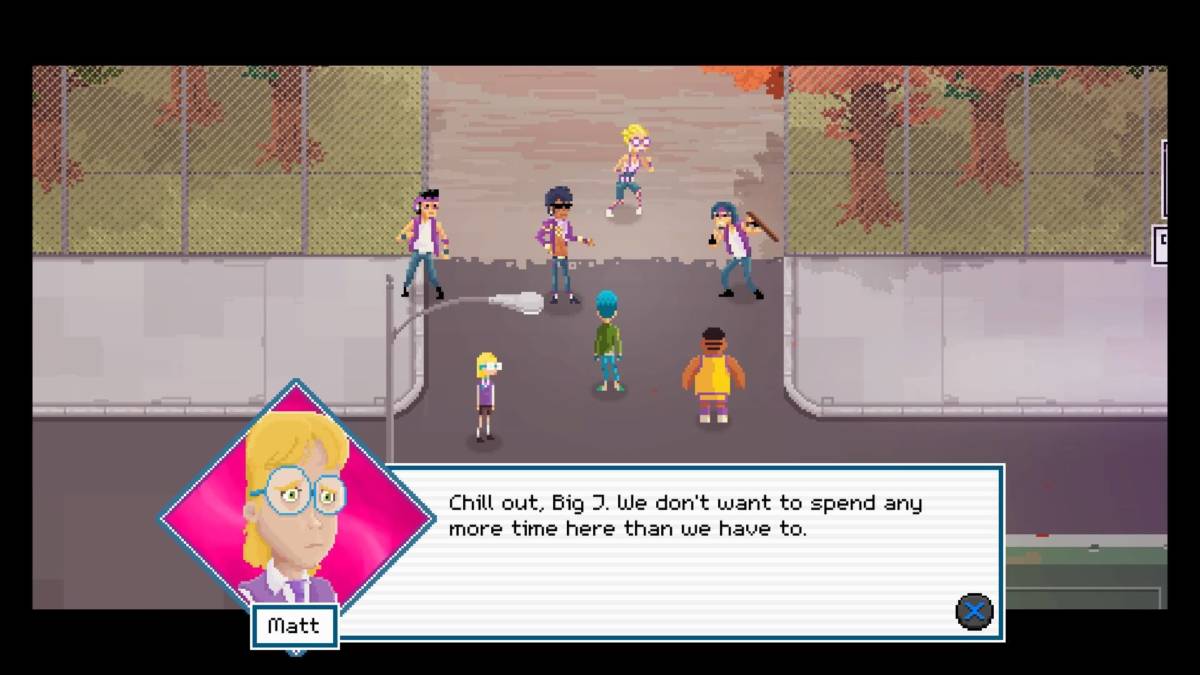 There isn’t an original character in sight, but when it’s tried and tested, why mess with a who’s who of misfits? There’s Chris (the leader), Matt (the nerdy one), Charlie (the only girl with colourful hair), Big Joe (the stocky one), and Kevin (the pain in the ass), who also happens to be Chris’ brother. Crossing Souls cleverly starts off by dripfeeding their introductions so that their personalities can come across, as well as their own unique abilities.

Each character plays differently, so one friend may be better for a job than the other. For instance, Matt is able to shoot a plasma gun of his own making, so he’s better at dealing with enemies from afar and hitting switches. He can also use his rocket boots to travel across distances that the others cannot jump. The stocky guy can move heavy objects and is very handy in a fight, but also has the stamina of a dead sloth. If you have a checklist of character stereotypes, you will get through all of them pretty quickly in Crossing Souls. 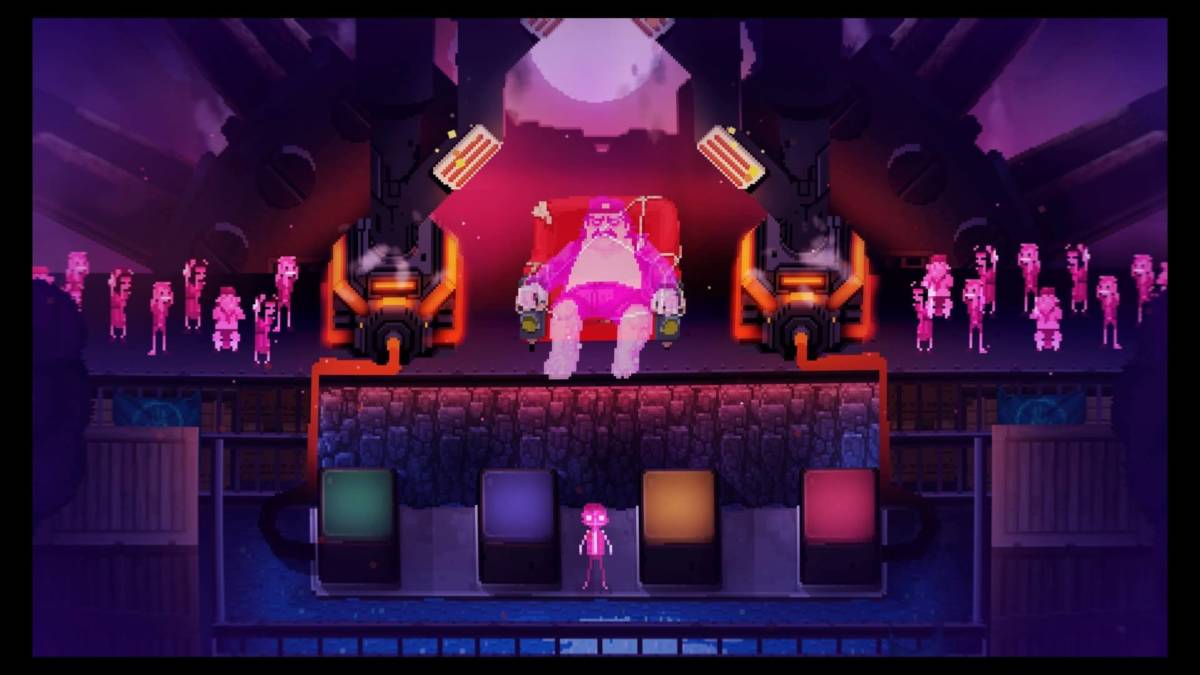 How Crossing Souls uses this well-worn squad of clichés is what makes it more interesting than most, however. In combat, there’s typically a friend for every unfriendly obstacle, which usually take the form of undead spirits. After the gang finds an object called the Duat that allows them to see into the netherrealm, the game really opens up and the homages start pouring in. Ghostbusters is an obvious one, but there are (heavy) nods to Gremlins and even Teenage Mutant Ninja Turtles. What’s sure to impress nostalgiaheads the most, though, is the game’s wonderfully lo-fi cutscenes, which look like they’re ripped straight out of a Sunday morning cartoon with VHS tape picture ripples and all. For all of its faults, Crossing Souls has an undeniably excellent aesthetic.

The power of the Duat makes them a target for mysterious forces that, again, feel intentionally formulaic. The overall story borrows liberally from other sources and could have even stood proudly as its own thing if it wasn’t for some rather bland writing. You can almost predict what characters are going to say next, it’s that generic. It’s by no means bad and can sometimes even hit an emotional note; it’s just not especially noteworthy or even as funny as it thinks. Granted, Fourattic is a Spanish studio, so some things could get lost in translation or not have the same impact. 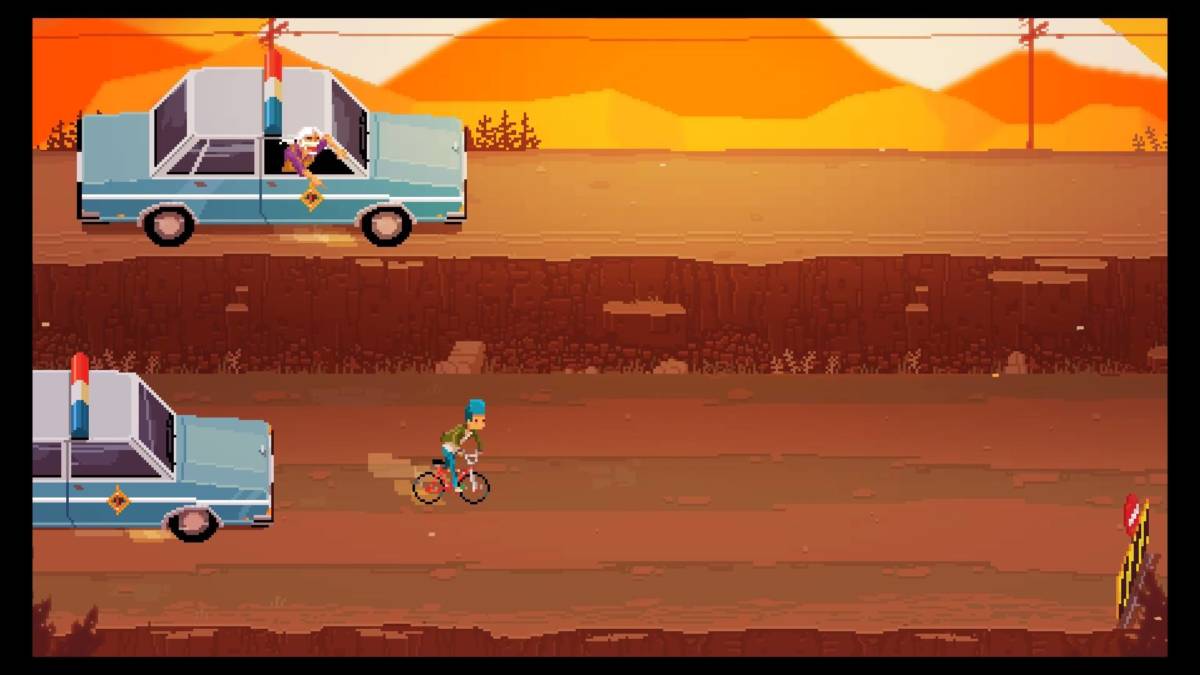 Most of your time with Crossing Souls will be spent evading mad scientists and power-hungry juggernauts, which can only mean one thing: puzzles. Crossing Souls has lots of them, but they somehow manage to never be too easy while also making you feel like a mastermind. As someone who traditionally breaks out in hives when he sees a crossword, an even approach to originality and difficulty is key to holding my interest, which Crossing Souls managed over its five or so hours of gameplay.

Away from the chin-strokers and the combat, Crossing Souls does a fantastic job of varying gameplay to keep the experience fresh. It’s not quite NieR: Automata levels of flipping everything on its head, but it successfully flirts with other genres to include sequences that include riding away on your bicycle while avoiding obstacles, button spamming to accelerate fast enough and even a short but sweet bullet hell-lite sequence featuring airships. It’s a strange mish-mash that really shouldn’t work — Fourattic’s retro reverence means that it does with aplomb. 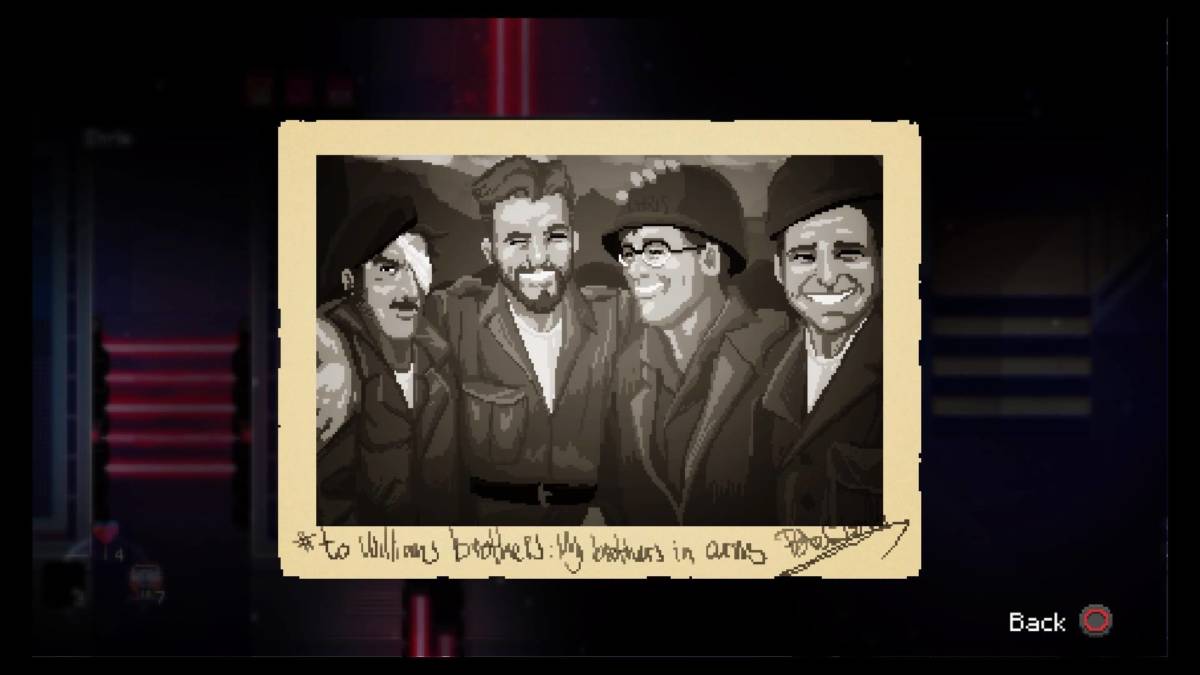 Perhaps these sequences are so inviting because the main meat of the game isn’t particularly inspired, aside from the ability to flit between dimensions. Combat is fine and fluid enough, though I was never compelled or empowered by it; it just sort of does its job. The dynamism of swapping between characters is one of the game’s best ideas, but the controls don’t always feel logical, especially when a ghost joins your crew. If one of the friends croaks it, it’s game over for everyone, which means some hurried pressing of L1 to switch out the most vulnerable character. Annoyingly, you may miss the character you want to pick or end up on an even more damaged friend so you then have to cycle through them all again rather than going back with R1.

For such an intrinsic part of the game, Crossing Soul’s platforming is rather unreliable. It’s easy to misjudge distances and end up in water and then mercifully be spawned back on dry land, but it’s quite unresponsive when you attempt the jump again immediately after, resulting in the same outcome. It’s fine in the early goings but utterly maddening in the game’s latter stages where perfect platforming is the brunt of the gameplay. 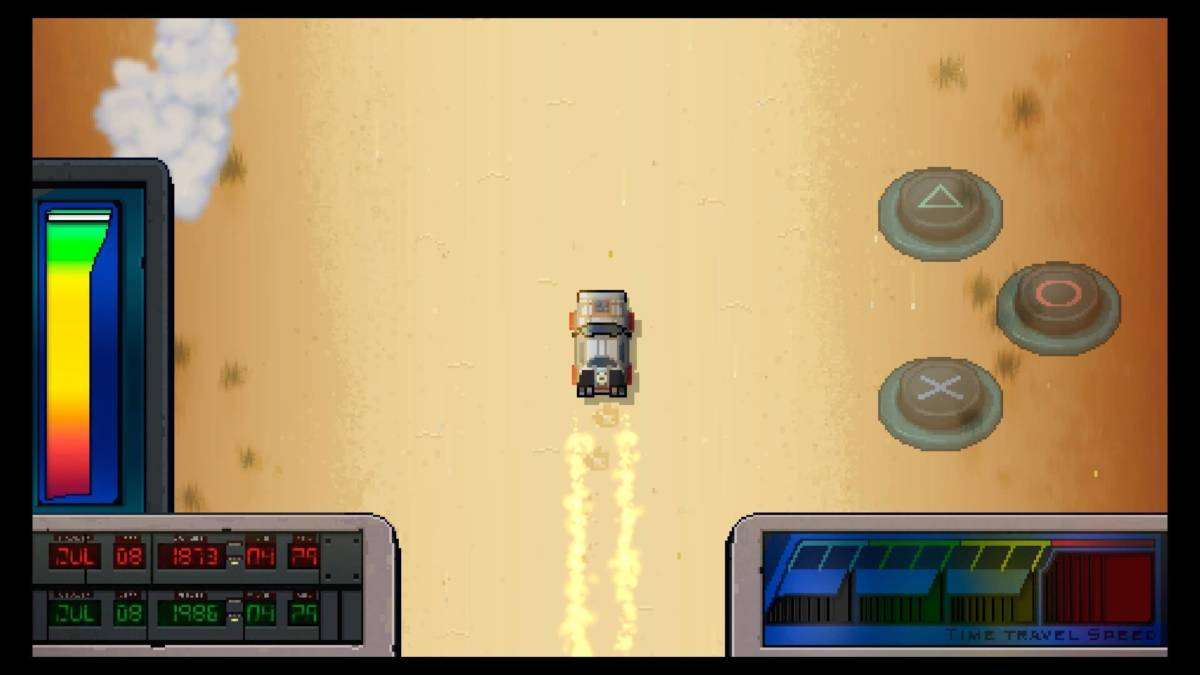 The final hour is also where Crossing Souls loses sight of its USP and feels like a drawn-out and lethargic trip down memory lane. Crossing Souls sputters over the finishing line as it runs out of ideas while the narrative backs the game and its unique mechanics into a corner. It’s a shame because when it’s in full flow and just having fun, Fourattic’s slice of retro pie can be a small joy.

Ultimately, Crossing Souls will appeal to anyone who wants a wackier and interactive version of Stand By Me with some unique gameplay quirks to keep things relatively fresh throughout, or at least until its mediocre closing stages. The stream of references may be worth the low price of admission on their own, but I found that too much of it fell flat for me to fall completely in love with it.

Verdict
A small but worthwhile trip back in time, Crossing Souls may have enough charm to help you look past its flaws. You should also inject its soundtrack directly into your earholes. Microtransactions: none
7