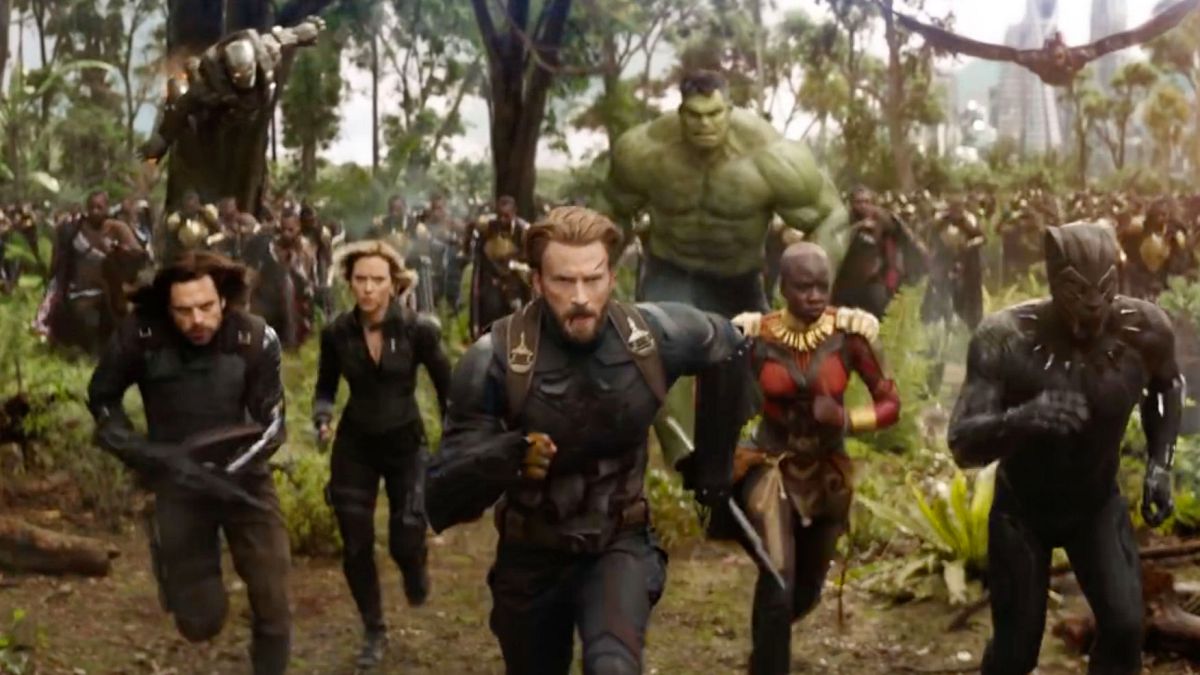 We’re now mere hours away from one of the biggest cinematic events of our time, Avengers: Infinity War. A film that sees the culmination of ten years of comic book adaptations as characters like the Avengers, the Guardians of the Galaxy, Ant-Man, Spider-Man, Doctor Strange and Black Panther come together to face off against the intergalactic despot, Thanos.

But with the Marvel Cinematic Universe now 18 films strong (19 by the week’s end), it’s understandable that some viewers may have missed out on the best the MCU has to offer. Or maybe just need some prompts on what to watch before Marvel assembles its universe-spanning cast of characters.

With the excitement at an all-time high, Cultured Vultures has written up a list of the top five films from one of the biggest film franchises of all time, all five of which just so happen to be films you should watch if you want to catch up!

We would be remiss if we didn’t mention the film that started it all. While there are better films in Marvel’s line-up, it’s hard to deny that we have a special place in our hearts for Iron Man.

Back in 2008, the superhero genre was a bit of a mixed bag. Yes, we did have The Dark Knight, but we’d also suffered through Spider-Man 3, Fantastic Four: Rise of the Silver Surfer and X-Men: The Last Stand.

But then in came Robert Downey Jr. as Iron Man.

Delivering a superhero story unlike any other, Iron Man followed the origin story of Tony Stark, a character who – in all honesty – was not at all heroic. In Stark, audiences were introduced to an arms dealer nicknamed the ‘merchant of death’, a character who had no real qualms about the lives he destroyed until it directly affected him. But over the course of the story, Stark saw a redemption, as he donned an undeniably cool suit of mechanical armour, taking the fight to terrorists and greedy businessmen alike.

Delivering the first of Marvel’s signature quips, a techno-thriller vibe and some seriously dark scenes depicted in Stark’s time as a captive in the Middle East, Iron Man changed the superhero game. And that was before we even got to the point when Samuel L. Jackson showed up to talk about ‘The Avenger Initiative’.

Despite producer Kevin Feige’s previous claim that the Marvel Cinematic Universe was going to stop bringing origin stories, recent years have still seen several. We’ve had the introduction of Doctor Strange and soon, Captain Marvel to the MCU’s pantheon of heroes.

Similarly, Marvel’s most recent blockbuster, Black Panther, straddled the line of telling an origin story. Although the character was first introduced in Captain America: Civil War almost two years ago, this new story – set a week later – showed us how the character of T’Challa really came into the role of the Black Panther.

Although this film is heralded by many as one of Marvel’s best, it does have a few issues. The action sequences, for one, pale in comparison to its peers, and the character of the Black Panther himself seems to take a backseat in his own movie.

However, that’s a fair trade-off for everything else Black Panther brings to the table. With well-written characters, including some particularly badass heroines and two of the series’ greatest villains, Black Panther continues to prove why character is key to the success of these films. Furthermore, the rich afro-futurist aesthetic holds the film up as a beautiful celebration of diversity, with a unique look, feel and musical style that really helps it stand on its own next to other Marvel movies and superhero films in general.

Black Panther is a great start, and the sort of thing we’d like to see more of, but there are other films far more deserving of the ‘top five Marvel movies’ pedigree, namely…

While Iron Man may have changed the game and set us down this path in the first place, its achievements don’t stand up to that of The Avengers.

Between 2008 and 2011, Marvel introduced (or reintroduced, in some cases) audiences to a fantasy god, a walking war machine, a Jekyll and Hyde-esque monster, a colourful, campy World War II soldier, and then threw some spies into the mix for good measure. The end result was this 2012 team-up of epic proportions, where director Joss Whedon managed to blend together these unique and dynamic personalities and really cement them in a singular, cohesive shared universe.

That alone makes this deserving of a top spot; the fact that this crazy idea actually worked!

However, on top of that, The Avengers is just great fun. While there are some slow points in the first half, most of the film exudes pure joy as it allowed comic book fans new and old to see some of their favourite characters banter and brawl on the big screen. On top of that, despite being the sixth film in the series, The Avengers acts as the perfect jumping off point, as (almost) every character is given enough screen time so even newcomers to the series could get a solid grasp of who these heroes are.

With a whole lotta heart, some quippy dialogue and a truly menacing performance from Tom Hiddleston, The Avengers succeeded in every way it set out to.

It changed cinema forever, and it had a great time doing it.

4. Guardians of the Galaxy

Despite a couple of mishaps (Iron Man 2 and Thor: The Dark World), Marvel Studios movies had always been at least consistently ‘decent’. But with The Avengers out of the way, there was a fear that the film series might start to grow stale. After all, how do you make an endless string of superhero movies seem different and fresh?

2014 delivered the answers, twice. The most notable time for many being Guardians of the Galaxy. The reason Guardians is so notable among all the other Marvel superhero movies is because it’s not a superhero movie. Sure, there are heroes, villains, grand stakes and a MacGuffin that ties in with many of the other Marvel movies, but at the end of the day, it’s far more Star Wars than Avengers.

Under James Gunn’s direction, Guardians of the Galaxy once again reminded us why Marvel’s cinematic heroes were different from the likes of Batman and Superman, in that many of them are inherently flawed.

Star-Lord and his band of misfits start the film as a bunch of no-good criminals, and only through circumstance are they forced to become the heroes that the galaxy never knew it needed.

With a killer soundtrack and some much-needed exposition about who holds the real power in the Marvel universe, Guardians of the Galaxy introduced audiences to a new brand of hero, and began teeing up its expansive universe for the reckoning to come in Infinity War.

Taking ques from Guardians of the Galaxy, Marvel reinvigorated the Thor franchise with Ragnarok. Although one could argue that the original Thor is one of Marvel’s most underrated films, Ragnarok took things to new heights.

As part of Phase Three, Marvel is now truly starting to bring different vibes and genres to their movies, and so, taking characters like Thor and the Hulk and throwing them into a zany cosmic adventure was a stroke of genius. A similarly inspired move was hiring New Zealand’s darling director Taika Waititi to take control of the project, because while a lot of Marvel’s films are humorous (and can be dubbed action comedies), Thor: Ragnarok is, without a doubt, the funniest of all.

Taika’s brilliant wit takes the quips and jests prevalent throughout the MCU and elevates them, bringing new dimensions to the Avengers’ two most powerful members and letting them crack jokes in situations where they never feel tireless. Whereas Guardians of the Galaxy Vol. 2 stumbled at times in terms of humour, Ragnarok carved out its own brand of comedy, and in doing so delivered the best Hulk movie of recent years (and the best Thor movie, and, this writer would argue, the best Doctor Strange movie).

On top of all that, Ragnarok is the last film to take place in-universe before the events of Avengers: Infinity War, so if you want to know what some of that film’s biggest players are up to prior to seeing the upcoming movie event, then this is the place to look.

I’ve been a comic book fan for a long time, but when I saw The Winter Soldier back in 2014, even I was caught off guard – who knew a Captain America film could be so… awesome?!

In the same way that Guardians stopped Marvel from getting stale, so too did the second outing of the star-spangled Avenger, ditching your standard superhero storytelling for a more down-to-earth action thriller. Starring the likes of the legendary Samuel L. Jackson and Robert Redford, this movie with packed with a load of Marvel firsts – from the espionage focus to the truly amazing action choreography – this film was truly a step up in terms of Marvel movie making.

And to think, it came from the Russo brothers, a pair of a directors who, prior to this were most famous for directing episodes of Community and Arrested Development. Both good shows, sure, but not the sort of portfolio you would expect when coming into an explosive and exhilarating movie that changed the entire dynamic of the way heroes operated in-universe.

Only a few years later, these talented siblings would be handed the keys to the Avengers franchise. If you want to understand where such a trusting step started out, then look no further than Captain America: The Winter Soldier. And if you want to see where that trust was cemented…

The best of the best. Nearly everything these other films have done, this film did better. Returning to deliver their honest and powerful take on the Sentinel of Liberty, the Russo Brothers continued to show why Captain America is the heart and soul of the Marvel Cinematic Universe.

In this story that started out as an allegory for gun control, Captain America and his allies come to blows with former fellow Avengers member Iron Man in a gut-wrenching clash of ideals and personalities. And the brilliant thing about that clash? Both sides can be considered right. Similarly intriguing is the fact that the villainous mastermind behind the destruction of the Avengers doesn’t technically lose.

With insightful looks at characters we’d seen grow over the course of eight years, Civil War was another movie milestone, as it did what Avengers did before it in 2012, but on an even bigger scale and with much more heartfelt stakes.

And on top of juggling all these memorable characters, the Russo brothers also took some time to introduce us to Black Panther – bringing some more much-needed diversity to the MCU – and the most comic-accurate interpretation of Peter Parker, the amazing Spider-Man, who instantly won the hearts of audiences with his youthful exuberance.

For Marvel fans, every minute of this film has the potential to have you grinning from ear to ear, and if this is anything to go by, Avengers: Infinity War could be the best superhero movie of all-time.