What a beautiful game. 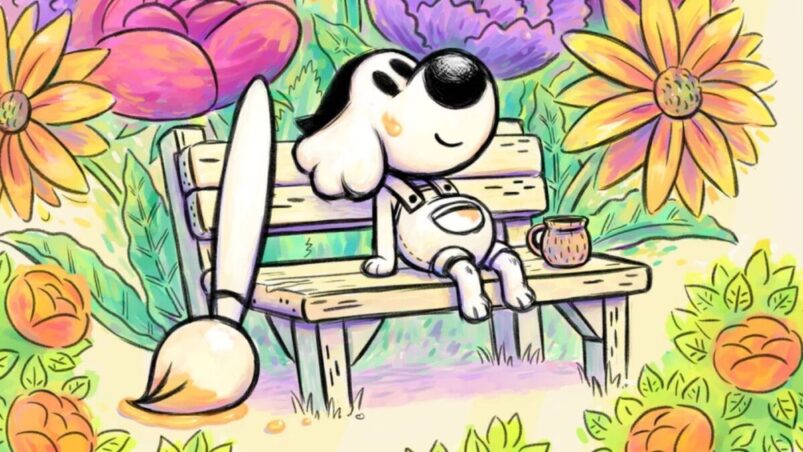 Chicory: A Colorful Tale is a beautiful game about painting your surroundings in the quaint region of Picnic back to life, one brush swipe and splurt at a time. Even those who don’t have an artistic bone in their body (me) will find some joy with it, whether that’s helping a grieving koala to create a garden for their departed friend or designing your own doughnut. It’s a real wonder of a game that deserves all the love it gets.

But it doesn’t last forever, sadly. After playing it every night as sort of a relaxing comedown from hectic days for the past couple of weeks, I dusted off Chicory’s story in a rousing finale that gave me just as many goosebumps as Wandersong, developer Greg Lobanov’s previous game. I won’t spoil what happens here, but it’s worth highlighting just how good its credits are, one last testament to just how inventive and brilliant this game really is.

As well as thanking me as a player (aw, nice), Chicory’s end credits also show timelapses of some of the most distinct environments around Picnic, how you changed the world around you with your magical brush. While I’d have no issues sitting through the credits regardless as I was in a bittersweet mood that the game was over and just wanted to soak it in, these credits made me sit and pay attention throughout.

It’s not just the simple things, either. It’s everything you did on one of the game’s many screens, including showing how you solved various puzzles and fixed your rough early paintings later on when you discovered more brush styles and meshed colours a little better. I felt a weird bit of pride in seeing how I had taken my random splatterings and turned them into environments that actually looked quite nice, despite them still being on the basic side.

To cap off this magic, you’re then shown a world map and every screen you uncovered in order, as well as every little pixel you coloured in. It’s hard to undersell just how impressive this is to behold, a technical bit of wizardry that becomes even more incredible when you realise how few people worked on the game. Imagine if Rift Apart showed you every time you shot a particular gun, or Resident Evil Village replayed every time you gawked at Lady Dimitrescu.

These end credits really just cap off what is one of the most surprising, joyous games I’ve ever played that showcases the PS5 better than so many people give it credit for. The haptic feedback makes every step and interaction feel lived, but there’s also the smaller touches throughout that help Chicory stand apart even more. While the game itself is pretty lo-fi, whether it’s designing your own hat and t-shirt, being able to decorate and colour the world any way you want, or the fact that your own designs come back to get you in a boss battle, Chicory feels like a truly next-gen game.

Chicory: A Colorful Tale is available now for PC, PS5, and PS4.

READ NEXT: 15 Best Casual Games Anyone Can Play