A light and frothy graphic novel. 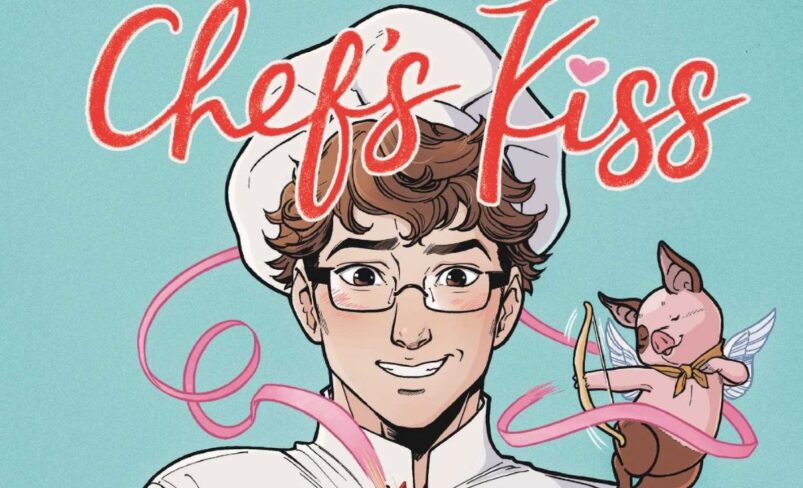 I’m not going to give into the millennial urge to turn everything into a conversation about how much it sucks to be a millennial. Besides, what I need to realise is that a lot of media being produced now about recent university graduates with no direction in life is actually talking about Gen Z. Millennials are old news: Gen Z is here and they deserve just as many conversations about how much it sucks to be Gen Z.

The reason I’m thinking about this is that Chef’s Kiss, the graphic novel brainchild of Jarrett Melendez and Danica Brine (with Hank Jones and Hassan Otsmane-Elhaou) is kind of about how much it sucks to be Gen Z. But it’s also a love story, and one of those very refreshing queer love stories that isn’t about being queer. These stories are becoming more and more prevalent and maybe soon I won’t feel the need to comment on each one, but for now, I am still so psyched to read a story like this where being queer isn’t a major plot point.

Ben is our protagonist, a recent graduate who thinks that he wants to read and write for a living, until he finds that even the simplest, entry level proofreading jobs require years of experience that he doesn’t have. Sound familiar? In a fit of desperation Ben, who kind of likes to cook a bit, applies to work in the kitchen of a restaurant – just until something ‘better’ comes along. There he meets Liam, who takes him under his wing – and things just kind of unfold from there in exactly the way you might be expecting.

Chef’s Kiss is trying to do a lot of things in its 160-page narrative, and some of them it does better than others. The love story is sweet, relatively light and frothy, but that doesn’t make it any less of a joy to read. It feels very real; there’s little angst or misunderstanding to muddy the waters. It’s just two young guys meeting at work and going from there. Liam is more sketched out as a character rather than completely coloured in, but this is Ben’s story and what we get of Liam is more than enough to be getting on with.

Where Chef’s Kiss has more to say, or is trying to, is in Ben’s attempt to navigate a world that he isn’t really prepared for. He lives with three roommates; one of them works for a start-up app, one is still in university and one of them is working a day job but also teaching yoga. It sounds like a fairly familiar set-up for anyone under the age of 35, a full spectrum of young people surviving as best they can. Ben’s dread of the idea that he might have to give up and go home to his parents if he can’t find a job is highly relatable.

Where Chef’s Kiss falls down, at least slightly, is in how Ben’s prejudices are really interrogated. After he applies unsuccessfully for writing jobs, he decides to apply to be a garbage man, and is also rejected from that. The story tries to make a bit of a joke of it, or at least that is the impression I got. But in failing to find the true humour in the situation and in failing to really investigate why Ben thinks such a job should be a walk-in for him, the story misses an opportunity and sort of makes Ben come off quite badly in the moment. When Ben’s snobbish parents make an appearance later on, you understand why Ben is like he is, and the novel does end with Ben having a much better lookout on the world of work in general, but it is hard to forget quite how dismissive of a job that was ‘beneath him’ Ben really was earlier on.

One more aspect of Chef’s Kiss that gives it an edge is the way it dips a toe into the fantastical, with a very straight face about it the whole time. Early in the novel there is an unexpected fourth-wall breaking moment, which is the only one in the book, and might feel out of place except for the amazing almost-fantastical abilities of one very important character who lives at the restaurant. These moments are a bit of a shift from the hyper-reality of the rest of the story and gives the whole novel a tone that – for the most part – just about pays off.