Not just for Valentine's Day. 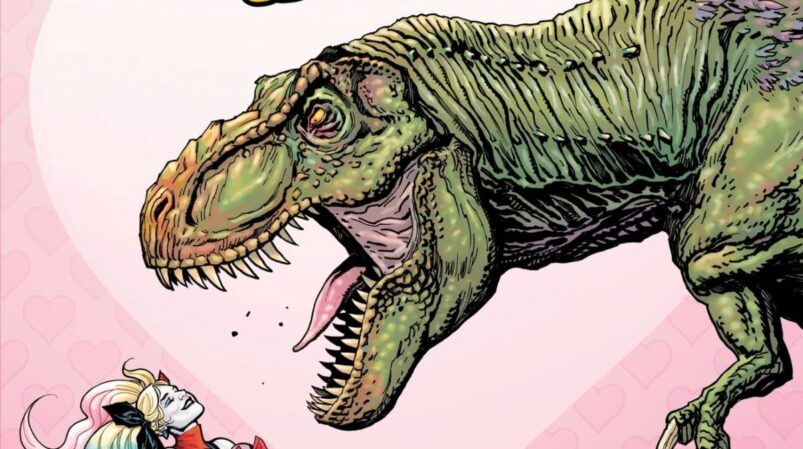 Some people might find romance a beautiful triumph. Others might think of love as a puzzle to decipher. Regardless, there’s never an inopportune time to celebrate the love between partners, close friends, and all the romance in between. For those wondering how to show their affection through acts of giving, commemorate a romantic holiday or anniversary by gifting a comic book.

‘Lightning in a Bottle’ opens the comic by putting the “strange” in “Strange Love Adventures.” Upset over a recent breakup with the Joker, Harley Quinn vandalizes JLA headquarters. When Shazam appears on the scene to reprimand her, Harley attacks the red-clad superhero. Black Adam finds the whole situation intriguing and pursues Harley for…marriage?

An actual romance occurs by the end, beyond Black Adam infiltrating Harley’s story. Thankfully, the twist at the end explains the baffling plot antics. Attuned to the plot’s zaniness, the vivid, dynamic art and lettering stand out. The story satiates Harley fans and kicks off the comic book with exuberant oddities.

Continuing the strangeness, ‘The Grodd Couple’ features Flash who races around as a romance wingman for supervillain Gorilla Grodd. Along with Iris, Barry Allen helps Grodd in his endeavor to win the romantic affection of another Gorilla villain, Primat.

‘The Grodd Couple’ may be the best story in the anthology. Boasting a highly original concept where Grodd and Barry team up for a double date while also delivering stunning art and panel layouts, there’s a lot to love. A delightful romance, you’ll find yourself flipping the pages faster than the fastest man alive.

Influenced by the Suicide Squad (2021)/HBO show iteration of the character, Peacemaker stars in “Love of Country.” The violent vigilante is out for vengeance when a group called the Fearsome Five interrupts his Valentine’s Day plans. Peacemaker lets his enemies know exactly how much the day means to him – through violence.

Anyone with an affinity for adorable animal sidekicks will probably agree; “Love of Country” has the cutest romantic ending. Unconditional animal love is a heartwarming type of love. The glamorous final pages strategically act as the antithesis of the rest of the comics’ ultra-violent massacre. Readers get a triple-threat combo of strangeness, love, and adventures.

Next, ‘Ritual of Love’ shines a light on the third Blue Beetle, Jaime Reyes in a first date story that turns into a cosmic catastrophe. While preparing for a Valentine’s Day date, Jaime gets a message from Scarab requiring his help – in space. The detour lands him amidst an interstellar fight between two rock monsters, and then into an accidental courtship with one of them.

Jokes abound, so ‘Ritual of Love’ may not stick the landing for the pun-averse. But the humour, illustrations, and story collide in a way that avoids any ham-fisted intentions. Again, the bizarre “love” portion here earns its place alongside the comics’ other strange stories.

‘In the Name of Love’ centres on Billy Batson and Superman. Unsure how to romantically approach his crush at her mom’s wedding, Billy invites Superman to accompany him as his older, wiser wingman. Clark Kent eagerly comes to Billy’s aid. Unfortunately, wedding crashers may derail the duo’s plans for romance.

This story highlights Superman’s compassionate nature toward the innocent Billy. Superman offers Billy genuine support and advice in a short monologue anyone wanting to woo a potential mate should be writing down for further reference. Sweet and simple, “In the Name of Love” wins the prize for the cutest characterization of familiar heroes.

Just as Peacemaker dedicates himself to peace, Alfred, Batman’s friend, and butler, dedicated himself to a life of loyal servitude. “Service” flashes back through various eras in Alfred’s life as a butler. Narrated by Alfred himself through captions, he recalls the affection and sense of belonging he discovered in service to his employers, including Bruce Wayne and the Bat-Family.

Told through wordless scenes, evocative interiors, and changing colour palettes, “Service” is a declaration of love from a unique perspective. No, the comic doesn’t necessarily tie into the anthology’s theme. However, readers may find themselves teary-eyed by the final page. “Service” deserves accolades for its poignant presentation of a butler’s transcendent love.

Lesser-known DC character Sgt. Rock headlines the unpredictable yet stirring romance short in the penultimate story. Marooned on an uncharted island, ‘Romance on Dinosaur Island’ follows Sgt. Rock as he searches for rescue. A budding romance between two velociraptors then captures his attention in his isolation.

Although not a familiar comic character, Sgt. Rock’s tale of hope and faith steals our hearts. There’s a high calibre level of craft in all facets of comic creation here. Carving out an exceptional story in an anthology chock full of talent remains difficult, but Rock’s story may leave the biggest impression on readers.

A Batman and Riddler story rounds out the anthology. ‘Dinner for Two’ takes Batman on a quest to solve Edward Nygma’s cryptic message after he destroys a florist shop on Valentine’s Day. Along the way, Batman discovers old romantic interests left behind due to Nygma’s convoluted moral path.

Writer Ram V’s superb talent for digging inside the flawed intricacies of his characters is on full display. Love and tragedy befall us all; a subject Bruce Wayne himself could expound upon himself. Framed through beautiful cut panels and purple-tinted colour palettes, ‘Dinner For Two’ closes out Strange Love Adventures with a riveting strange love adventure.

Strange Love Adventures traverses complex relationships and is worth the cover price. You can just as easily gift the anthology for an anniversary, as you can treat yourself to a love-filled read you can pull off the shelf any time during the year to boost your spirits.