Crystal Frasier’s Cheer Up: Love And Pompoms Is Full Of Heart 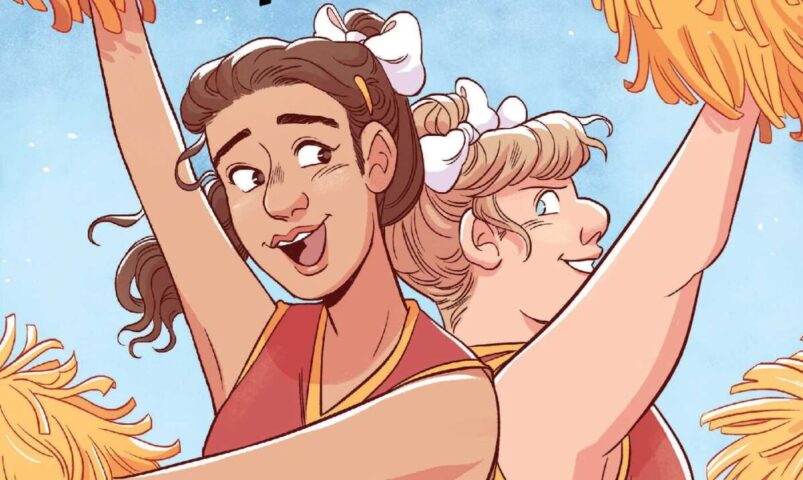 The school outcast, college-bound to study computer science, is forced to join an extra-curricular activity to pad out their college application. They reluctantly join the cheerleading squad where they make friends, learn the value of teamwork and fall in love with the beautiful cheer captain. If I told you this was the plot of a 90s teen movie, you’d probably believe me. But Crystal Frasier’s Cheer Up: Love and Pompoms, an adorably wholesome graphic novel, is brand new – and there are parts of the story that would never have made it into your average 90s rom-com.

Annie is our snarky outcast, a girl who absolutely doesn’t care what people think of her – and is not going to apologise for that time she bit someone, so don’t even ask. She’s super bright, but is forced to join the cheerleading squad to make her college application more rounded. Beatrice is the reluctant cheer captain who persuades the unimpressed team to give Annie a chance. Beatrice and Annie haven’t spoken since Beatrice transitioned – the history between the two of them is only hinted at – but the pair soon fall back into a supportive and loving friendship. With Beatrice dealing with a raft of issues that comes with being the only trans kid at school and Annie learning that having the support of the right group of people isn’t always a bad thing, friendship blossoms into something else.

Comparing Cheer Up to a 90s teen comedy is absolutely a compliment by the way; for many people who grew up watching those films, the narratives and the characters are timeless influences. But we all know that relatable narratives for queer kids have been seriously lacking up until the last few years, and now stories like Cheer Up are coming to fill in the gaps. It is very much a case of better late than never. There is some discussion that, of course, not all queer narratives need to be ‘about being queer’ and that is absolutely true. But it is also true that there is space for both types of story – especially when the story is this good.

Cheer Up is a gorgeous read and absolutely just right to be told in graphic novel format; Val Wise’s pastel artwork, a study in the use of warm and soft colours without being ‘cutesy’, is the perfect medium for telling such a kind and gentle story. There aren’t any villains in Cheer Up, aside from one notable exception in a boy who can’t take no for an answer – but he is eventually put well into his place in a very satisfying scene. But as for the other characters, none of them are ‘bad’. There are the parents who don’t understand Beatrice’s transition, but they can and do learn. Then there are the rest of the cheer squad who are the complete opposite, trying so hard to support Beatrice that they don’t always listen to what she has to say. But they can do better, and eventually they do.

There are a lot of themes in this deceptively simple looking book, quite apart from the queer ones. It is also about learning to listen to people, and actually hearing what they say. The book has important things to say about consent, and how even if you think you know a person, you should still ask them for their permission before you take a leap. And it is about learning to let go a little bit, and trust the people around you; relying on yourself is all well and good, but sometimes you should let someone else step up and catch you – especially if they want to.

Don’t make the mistake of thinking though that any of these themes come across in a preachy way, because they definitely don’t. Cheer Up is funny, sweet and full of love – for the people around you but – most importantly – for yourself, and the person that you have the potential to be.