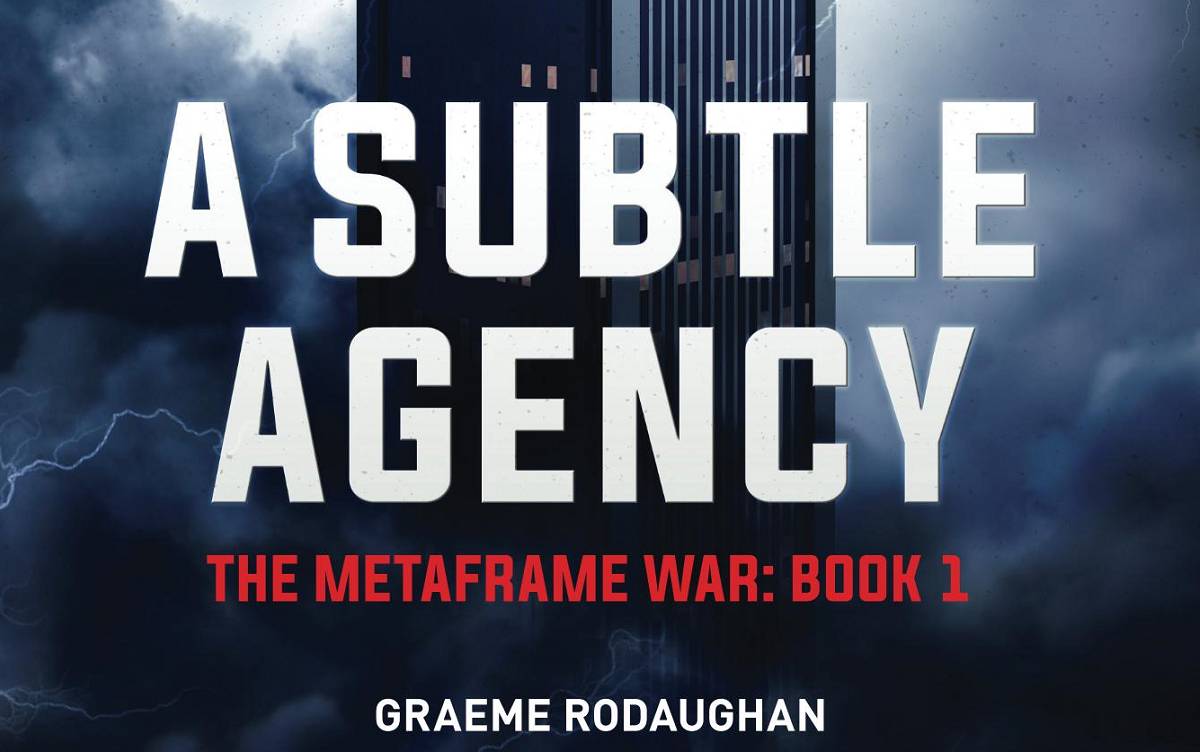 Continuing my journey to unearth great indie titles and authors (and following my review for Daniel Barnett’s Longreave) my latest read was A Subtle Agency by Graeme Rodaughan, the first book in The Metaframe War series. Like Underworld on speed, it’s got all the adrenaline and action-packing shots of entertainment you could want, wrapped up in a no-nonsense narrative.

The opening prologue throws us a few thousand years into the past, and into the basic premise on which the series stands. We discover how vampires were created. It has a very Fantasy thematic, which is a bit confusing at times, simply because we’re thrust into a world and terminology we’re not yet used to. Many essential components of the story are introduced to us, such as the Metaframe and Hakron the Scribe. While it is useful to get a grounding in this world, I wonder if perhaps it would have been easier for the reader if this section were spread out throughout the book somewhat. Nevertheless, we are soon in the present and familiar.

There are two key characters in A Subtle Agency: Anton Slayne and Chloe Armitage. Anton is young adult/teen who is unaware who he really is; one in a long line of vampire hunters. And Chloe is a General in the Vampire Dominion. We are introduced to both as Chloe begins her ‘subtle’ machinations to manipulate Anton into understanding who he truly is. For what purposes? All will be revealed. Chloe in particular is an interesting character; possessing a power the reader doesn’t immediately comprehend, and a depth that means she may not be all that she appears.

What the early chapters do reveal is a world beneath ours: the Vampire Dominion and the Shadowstone Organization, and the secret orders that vie to fight against them; the Order of Thoth and the Red Empire. Without giving spoilers, there is frenetic action involving fists and swords and speed. I’m not sure I have actually read a book that has had to describe so much action, and in the most part it pulls it off well.

“Anton felt a singular sense of calm and clarity of purpose. He dropped his knives. Leaning toward the two gangsters, he flipped his hands up, catching their wrists and pushing their gun hands high as he surged between them. He felt the bones in the men’s wrists break, unable to survive the sudden acceleration. Their submachine guns fired, the bullets streaming wildly into the ceiling as gray gun smoke billowed around his head. His forward momentum carried both men with him, placing the man on his right in between himself and Fats, and the last gangster near the back door. The man on his right shuddered as his body was filled with bullets meant for Anton.”

The book is your summer blockbuster movie – the narrative is straight-forward, and the characters are interesting enough to keep you reading. Plot beats flow from one to the next with obvious care and attention, showing some planning beforehand, all which build from one encounter to the next. The plot building is actually one of the book’s strengths – you can see all the pieces coming together, and the action is satisfying when the blood does spill.

Criticism comes in the form of the usual indie/self-published problem – the lack of a polished edit. One common issue is run-on sentences that should be split with one or two full stops – though adversely this probably actually helps in the action sequences! I stress there is nothing here to make anything unreadable – just the few typos and words ending with -ing instead of -ed – that kind of thing.

Its strength is the unravelling plot. There is some underdeveloped love interest (though I’m sure that will be developed more in the next book) – but a little more in this book would not have gone amiss, just to add some more character development between all the action. The additional characters as they are introduced are strong, especially Gang Wu, the proprietor of a restaurant and venerable Mr Miyagi. We learn as Anton learns, which is a great device for keeping the reader hooked, and as he develops, you become more invested in his story.

If ever there was a popcorn-novel this was it! For a fun, enjoyable read, grab yourself a copy!

Verdict
A Subtle Agency by Graeme Rodaughan is a popcorn-novel blockbuster, full of action set-pieces, vampires, amped-up humans, and an unravelling plot. The narrative is straightforward, and the characters are interesting enough to keep you reading. Plot beats flow from one to the next with obvious care and attention, showing some planning beforehand, all which build from one encounter to the next to an exciting climax.
7
Cultured Vultures is a pop culture website established in 2013 covering all things gaming, movies, and more. We eat your words.
All The News On Your Favourite Games