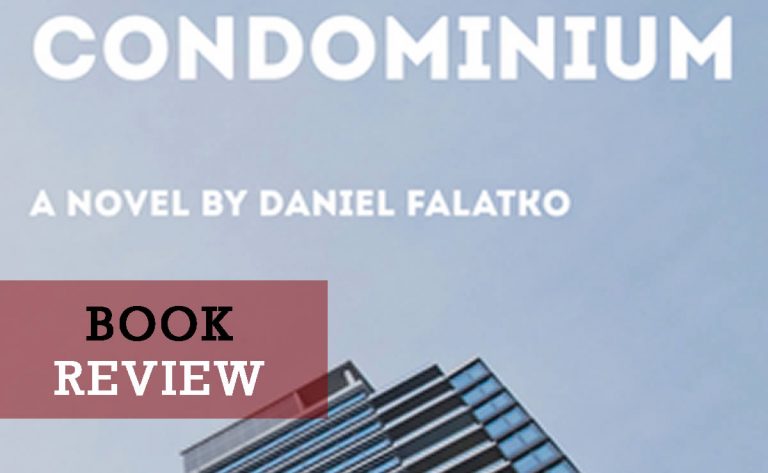 (Disclaimer: I’ll be taking part in a blog tour to promote this book this April.)

Charles and Sarah, a bobo couple in New York City, buy a Manhattan condo worth almost one million dollars. Adjusting to the new life in their new home proves difficult. They find themselves in a rivalry with their strange and uptight neighbor, Raymond, Charles’s fear of heights makes him afraid of the view, and their relationship seems to be close to coming apart.

The publisher calls Falatko “the Millenial John Updike”, which I find very strange. Is it common practice for publishers to blatantly insult their authors like that? Condominium reminds me more of Jay McInerney and Mark Lindquist with its attempts to examine the zeitgeist, the ennui, the humor, and the pop cultural references.

The humor in this book is probably the best part about it. Nearly all of the jokes work. Take this moment towards the beginning when Sarah is complaining about the movers.

“I mean, how many nips of Southern Comfort does it take to forget how to open a door? And to just leave me a message about it? Guess they knew they weren’t getting a tip. I’d give them a bad Yelp review, but that’d be a little drastic. I’m sure there’s kids out there who need their child support.”

The fights Sarah and Charles have with their neighbor Raymond are also hilarious. Raymond’s uptightness makes him a great straight man to the couple’s bobo tendencies, but his strange behavior kept me interested in where this plot line would go. I’m avoiding spoilers, but it results in an interesting twist at the end.

Falatko does a good job of examining the couple’s neuroses as well. The cracks in the relationship between Sarah and Charles are done subtlety, as is the arc in which Charles tries to overcome his fear of heights.

“In his mind he had been standing on the balcony the entire time he moved toward it, without fear, to the point where when he really did exit the sliding glass door to stand upon the extension it didn’t feel like such a big deal.”

Despite that, summarizing the book reveals what I find to be the fundamental problem with it. It’s about an upper class New York couple having an existential crisis. Yay. I asked for this? Well, I agreed to review it, so I technically did. But I think you get what I mean.

The descriptions of Charles and Sarah’s everyday lives are pretty dull. My eyes glazed over at a lot of the conversations with their friends, their visits to bars, and the descriptions of their jobs. The humor kept it mostly readable, I can forgive a lot in a book if it makes me laugh, but there isn’t much revealed in their interactions that doesn’t make them seem like a pair of entitled hipster idiots. As uptight as the neighbor Raymond is, he makes legitimate complaints about their behavior. Your neighbor screaming in the middle of the night for no reason is perfectly reasonable to complain about.

This doesn’t read like a Bret Easton Ellis novel where the characters are clearly privileged morons scraping for meaning in decadence. It treats them like I’m supposed to learn something from them. The whole premise of this book is what people think of when they think of “literary fiction” in the worst possible way.