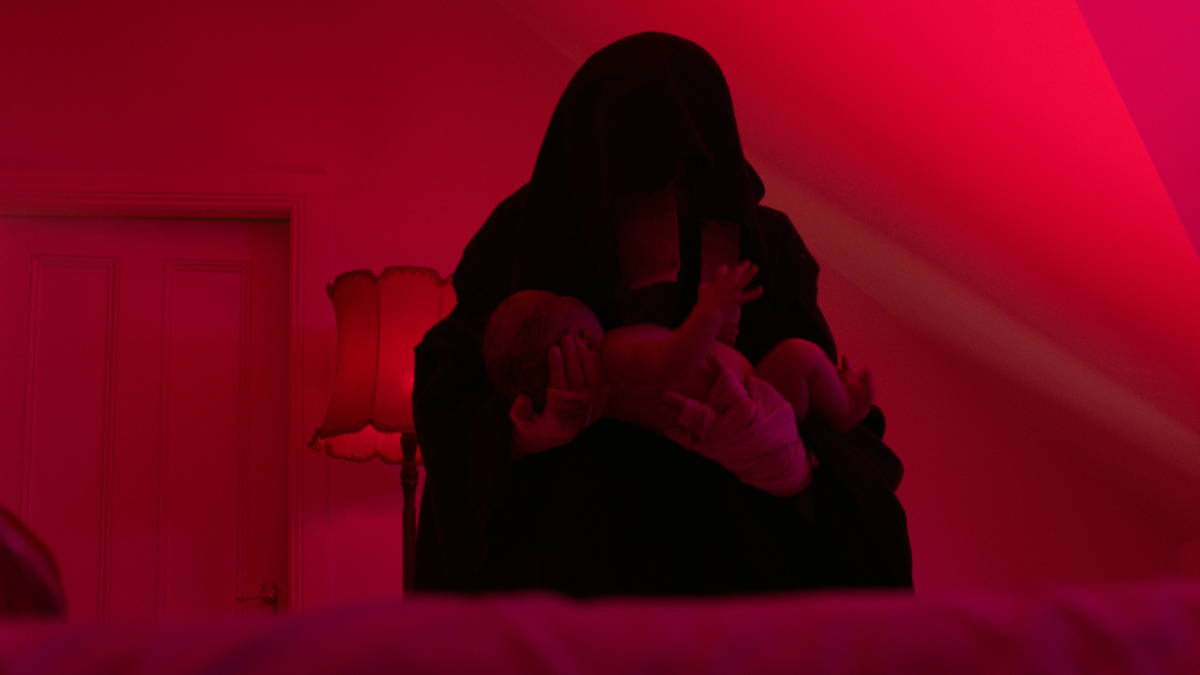 Dee Wallace has been playing mothers in horror films at least since 1977, when she starred in The Hills Have Eyes. So it’s interesting that even with Red Christmas, released on Blu-ray this month from Artsploitation Films, she’s still not yet playing a grandmother. One of her daughters is pregnant, but that’s as close as it gets. It’s almost as if we don’t want her to age out of being the movie mother that we grew up with. Not surprisingly, E.T. was one of my favorite movies as a kid, so she’s kind of seemed like the quintessential screen mother figure to me. But it seems like her heart is with horror movies, and she liked writer / director Craig Anderson’s script so much that she signed on to produce.

Wallace plays Diane, whose feuding kids are all over at her house on Christmas day. It’s a full house, since three of them are married. Their personalities clash so much that, if they weren’t family, they would never hang out together. Despite their differences, however, they will have to put aside all their squabbles and unite in order to try to stay alive while a madman stalks their house, taking them out one-by-one.

Cletus (Sam Campbell) is a superhumanly strong madman who is, yeah, a late-term abortion that was botched and lived another twenty years with a religious fanatic who kept him isolated and poisoned his mind for decades. Dressed a bit like the Grim Reaper, Cletus shows up at Diane’s door on Christmas, trying to reconnect with his long-lost mother. When he’s ultimately rejected and kicked out of the house, the murder spree begins.

With Red Christmas, Anderson creates a monster who is sympathetic despite his penchant for murdering people in the most brutal fashion. He’s been treated like a freak, isolated, abused, had the most primitive version of Christian dogma shoved down his throat. He knows virtually nothing about the outside world. Ultimately, he doesn’t realize he’s doing something wrong.

And, yes, the symbolism certainly can’t be ignored since it virtually punches you in the face with its obviousness. He is, indeed, the living embodiment of a late-term abortion. Now that’s something I thought I’d never write. But the film isn’t a pro-life movie in the strictest sense. Diane is given plenty of time to state her case. (Not that she needs to explain anything, but it certainly helps the dialectical element of the film.) I think even more than the abortion issue, the film makes an argument against religious fundamentalism. The movie begins with the abortion clinic bombing, where the bomber “rescues” Cletus and raises him in isolation. In that sense, Red Christmas even makes you question whether it was a good idea at all to rescue the child, given the miserable and torturous life he’s led up to this point.

If you somehow thought that a movie about a killer botched abortion was going to pull its punches, don’t worry. The blood flows like rivers here. People get split in half, eyes explode. And a bear trap is used…in quite a creative way. And that’s just for starters. I was actually a tad stunned at the audacity of the movie. I do wish things had skewed a bit more to the pro-choice side, but I guess that’s hard to do when you’ve got a goddamn botched abortion as your killer. And the violence, well, if you’re going to do something, you might as well go all the way. Luckily, Anderson gives us plenty of time between kills to catch our breath.

Red Christmas is wonderfully photographed. Anderson and his cinematographer Douglas James Burgdorff really know how to frame a compelling shot. Color choices are often monochromatic. Different rooms are given a different color to be saturated in. Reds, greens, a strange neon pink. That kind of thing. It’s not too often you see this level of care taken in a low-budget horror flick that was filmed in two weeks.

Red Christmas probably won’t make you think as much as it seems to want you to. It’s ultimately a well-done slasher film with an interesting enough gimmick. It’s over the top in ways that horror fans are sure to appreciate.

Special Features on the Artsploitation Films Blu-ray release include a director’s commentary, a twenty-minute interview with Dee Wallace, and an interview with Gerard Odwyer, who played one of Wallace’s children. There’s also a blooper reel and a deleted scene.

In the commentary, Anderson acknowledges that he wanted to make a dialectical movie exploring both sides of the abortion issue. At the same time, he recognizes that he’s making a shlock horror film. “This is nuts,” he says, “All bets are off.” Also interesting were the things that influenced the monochromatic color choices. He was inspired by Argento’s Suspiria (no surprise there), but also by a Chip ‘n’ Dale Christmas cartoon where each room was a different color. Well, sure. Why not, right?

There were a few interesting things to note on the Wallace interview, as well. First of all, she’s as sweet as you’d imagine her to be. And she also seemed to have a genuine passion for horror movies, saying at one point, “Give me Cujo any day.” Very well, then. Hopefully someone will. I’d love to see Wallace in more genre films before too long.