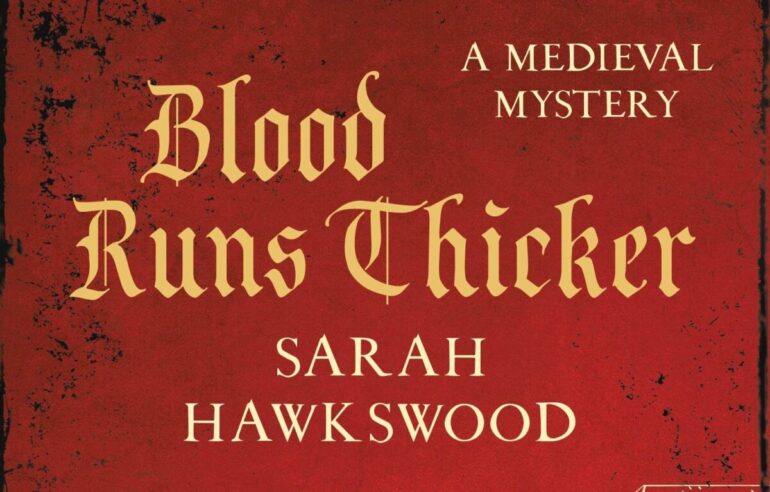 As someone who likes to think of themselves as a very enthusiastic amateur historian, there are few things that I like to hear more than ‘medieval murder mystery’. Umberto Eco’s The Name Of The Rose is one of my favourite books, so I was excited to be given the chance to get my hands on Sarah Hawkswood’s Blood Runs Thicker, a murder mystery set in 12th century England. It wasn’t until I finished the book that I realised Blood Runs Thicker is actually the eighth in The Bradecote and Catchpoll series, and I am woefully behind the times.

Blood Runs Thicker follows Hugh Bradecote, vassal lord to the Sheriff, and Sheriff’s Serjeant Catchpoll as they try to solve the murder of Osbern de Lench, a tyrannical lord found dead after his usual midday ride out. There is no end of suspects. De Lench’s heir is just as hot tempered as his father. There’s another son who was unaccounted for at the time of the crime, and plenty of other enemies around as well who might have it in for de Lench. Bradecote and Catchpoll, along with Catchpoll’s apprentice Walkelin, have a mighty puzzle on their hands.

I mentioned that I didn’t know until I finished the book that I had no idea there was a series of novels before this, and I mean it. The book reads as though the characters were fresh from Hawkswood’s mind, so to speak. It is made clear that each volume of The Bradecote and Catchpoll series stands alone. This is a claim that I’ve seen many times, but before this one, I don’t really think I’ve ever come across a series where that is true apart from Terry Pratchett’s Discworld.

What makes Blood Runs Thicker, and Hawkswood’s writing, so impressive is that I couldn’t see the seams between the story for new readers such as myself and loyal followers of Bradecote and Catchpoll. Looking back on what I can now see are scenes which loyal readers would have prior knowledge of, I think Hawkswood really has achieved something to be remarked upon. At no time did I feel like I was missing information. It’s a technical point to make, I know, but I really admire the craft it must take to cater to both audiences.

Blood Runs Thicker also feels fresh – ironic, for a book set in the 1100s – because it is such an old school murder mystery. What I mean by that is that all we have to do to try and solve the mystery ourselves is read closely and note what the characters are saying and seeing. There is no DNA evidence. There’s no last-minute CCTV to save the day. Bradecote and Catchpoll have their eyes and ears, and their experience – nothing more. I don’t have anything against modern murder mysteries, but all too often the answer is something clever that the reader had no chance of knowing or surmising. By having these characters in this setting, so far back from even Agatha Christie’s style of mystery, you really feel as though you could be in with a chance of figuring it out – which is half the fun, of course.

Not that I did figure it out of course – Hawkswood is too smart a writer for that. Her story is tightly plotted, with not a word out of a place or a single superfluous character to get in the way. The murderer genuinely could have been any one of her carefully established suspects, and we were kept on the edge right until the end. Catchpoll is the really experienced man when it comes to murder, and he’s such a great character; a bit gruff and more than a little bit insubordinate, but so good at his job that it doesn’t seem to matter. But he isn’t good at it in an annoying way – in everything he says, you can completely follow his thinking and understand how he came to the conclusion that he did. Again, this book – and I can assume this series – has some seriously good writing.

Loyal readers of The Bradecote and Catchpoll series won’t need me to go and tell them to get hold of Blood Runs Thicker. But if you haven’t heard of the series before, and you like historical or crime fiction, then definitely consider Blood Runs Thicker. I hope it will draw you in just as it did for me. As for me, I’m off to read the rest. I know I won’t regret it.

READ NEXT: 8 Best Books Set In Paris, The City Of Love