Beyond a Steel Sky isn’t a perfect game, but it’s made with a lot of love and attention. 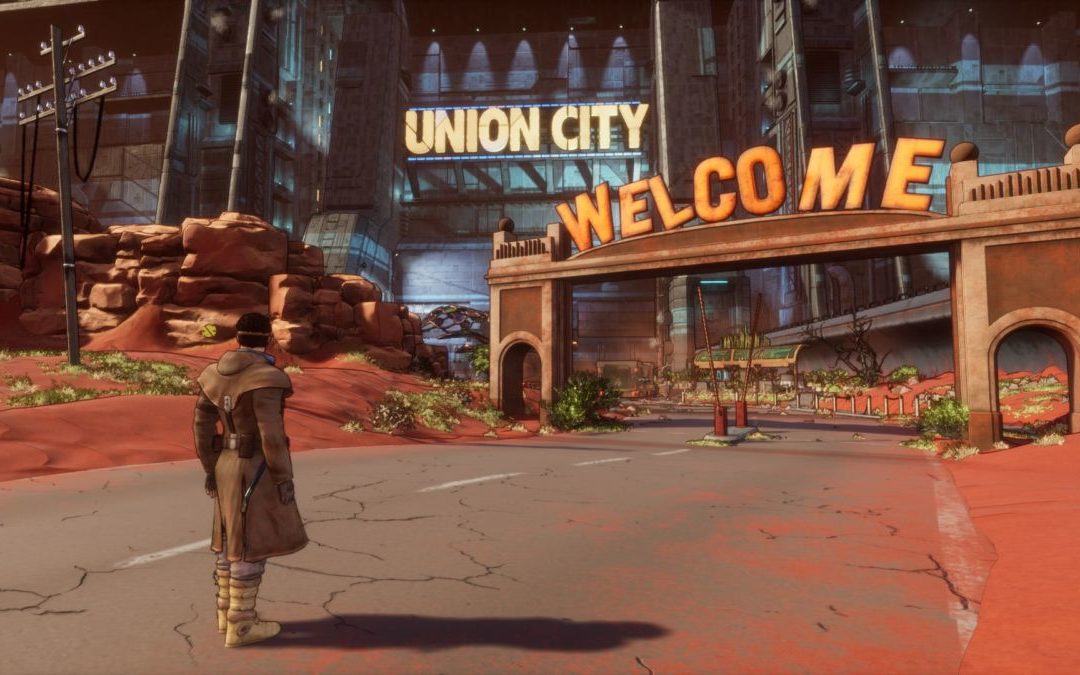 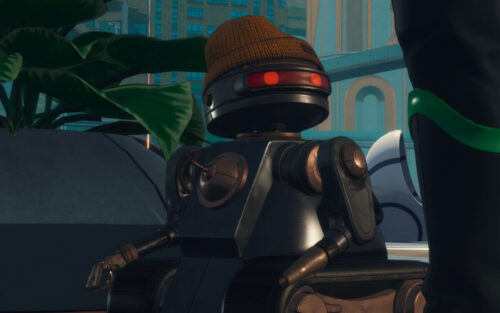 It’s been two and a half decades since the release of Beneath a Steel Sky, and I’m certain that most fans of the original game had given up on ever seeing a sequel. I vividly remember trying to play this game around 1995, and finding it cripplingly hard to progress. What else I remember is being astounded by the voice work, sound, presentation and most importantly graphics.

I generally don’t like to focus on a game’s graphics, but Beneath a Steel Sky really managed to nail down a Blade Runner style cyberpunk cityscape long before, well, the Blade Runner game did. It’s become a cult classic over the decades, and fans have long sought after a sequel. With all that time waiting, can Beyond a Steel Sky live up to the expectation?

Beyond a Steel Sky picks up 10 years after the original game, and begins in a familiar fashion. Much like Beneath, the game starts with a kidnapping. This time it’s not protagonist Robert Foster on the receiving end — he’s a witness to a child being taken by a four legged vehicle instead.

Foster takes it upon himself to follow the vehicle to Union City, a place he left at the end of the previous game, under the watchful eye of Foster’s robotic friend Joey. Joey has turned Union City from a smoke belching industrial cityscape into a bustling modern utopia. But Foster is about to uncover a mystery hiding behind the beautiful city’s aesthetic.

As you might expect, Beyond is a very different game to Beneath. While Revolution Software decided to keep the traditional point and click style for the most recent Broken Sword sequel, Beyond moves about as far away as it can go without changing genres.

Beyond uses a third person perspective, switching to various camera angles when you talk to someone or perform various actions. While others have claimed it is reminiscent of the Telltale style games, I actually felt it is much more like 2014’s Dreamfall Chapters. Beyond is, of course, now fully 3D, allowing us to see Union City in its full glory.

As a non-combat, story-driven adventure game, Beyond follows the tried and tested game design of its predecessors. Generally speaking, there’s puzzles, talking and items to pick up. Items are pretty standard fare: explore and examine your surroundings and Foster will usually pick up an item if he needs it, or if he feels like it could be useful. This can be a little intimidating to do around a three-dimensional space, but Beyond never overbears you with having too many things to examine.

Conversation works similarly to the likes of Mass Effect. The lower center section of the screen displays a conversation tree, with various subjects or responses showing up. Some subjects remain after they’ve been asked, and continually asking about it can lead to further information, while some subjects disappear altogether and others can even lead into new subjects. Occasionally you’ll be asked a direct question, and possible answers are shown in the tree, highlighted in green.

Beyond a Steel Sky doesn’t have a huge amount of general puzzles (although there is a Towers of Hanoi, Hanoi fans), but it does have ‘point and click’ style puzzles. These puzzles mostly take the form of finding items and taking them to individuals, using them in certain places and in certain ways or orders, and sometimes combining items. Don’t panic, though, adventure game fans: there’s no Discworld’s Fishmongers Belt or Gabirel Knight’s Scooter puzzle here.

There is one mechanic which isn’t quite a puzzle, but does involve some working out. Robert Foster has a hacking tool which allows him to manipulate certain systems in the game world. Foster can scan a machine, and change the way it operates to get it to work correctly. Here’s an early example from the game:

The hacking tool allows you to swap part of the sequence to change the final result. So it becomes:

There are often different options to swap to get the final result, and if a number of machines are located in a single area, you can swap options around from machine to machine. It’s hard to explain, but very simple to do and a really clever feature.

Both Beneath and Beyond a Steel Sky saw Watchmen comic book artist Dave Gibbons team up with Revolution co-founder Charles Cecil to create the artwork for the game. The intro has a number of beautifully designed comic book style panels.These graphics sadly don’t carry over to the main game, however.

Beyond’s graphics are a bit of a mixed bag. While world design, scenery and the general world building are actually really beautiful, character models, however, aren’t quite as hot. Revolution have tried to carry over the comic book style by using cel-shaded style graphics, but generally the character models are hit and miss.

It’s obvious they’ve gone with a cartoon style for the models to give them more character, but personally I feel they clash with the style of the world and also feel a little stiff and stilted. This doesn’t really take away anything from the game, but it is noticeable, especially compared to the smooth hand drawn animation of past Revolution games.

As you’d expect with a Revolution game, the script is great. Charles Cecil is a very passionate writer and his scripts for Revolution games always have a lot of depth and detail. The only issue is that it may be a little too detailed at times, with the same details coming up multiple times in a single conversation despite choosing different options, sometimes making conversations feel drawn out and a little overstuffed.

The soundtrack, as expected, is superb. Revolution Software are known for having soundtracks that really help to complement their game and Beyond a Steel Sky is no different. In fact, it might be the best soundtrack in any Revolution game. There’s also some fantastic work done on the voice work.

While there doesn’t appear to be any returning voice actors from the original game (so no young Jason Isaacs here), the cast does an incredible job of bringing the characters to life. Much like other Revolution games, there’s always a vast and sometimes odd choice of British regional accents on show here.

Beyond a Steel Sky is a great adventure title, but it’s not perfect. There are a number of graphical hitches and ticks and while they don’t spoil the game, it does feel a little messy at times, however expect this to be patched very soon. As mentioned before, the animation feels a little wonky, and it is because of this that moving Foster around sometimes feels a little stiff.

One thing that might also put off gamers is the slow pace of the game, though honestly it’s to be expected for a game that borrows so heavily from the point and click game style of its prequel. That said, those willing to give it a little patience — and adventure game fans in general — will lap up this return to Union City. 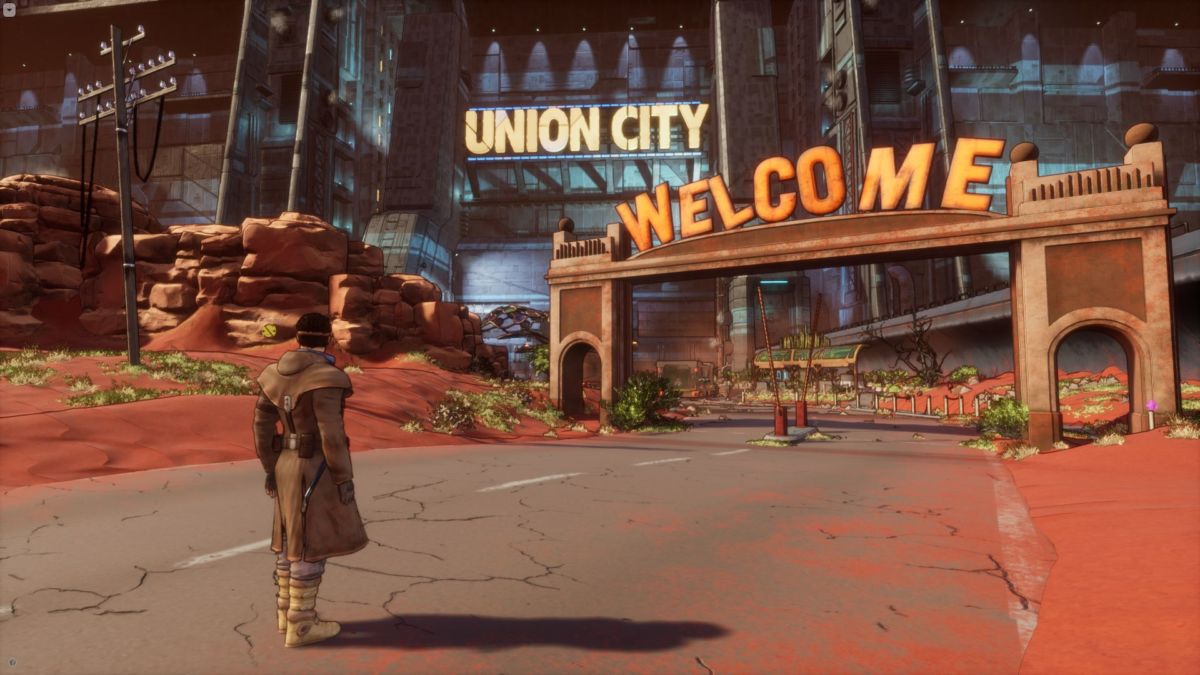 Verdict
Beyond a Steel Sky isn’t a perfect game, but it’s made with a lot of love and attention from the developer and is a must play for adventure game fans.
7