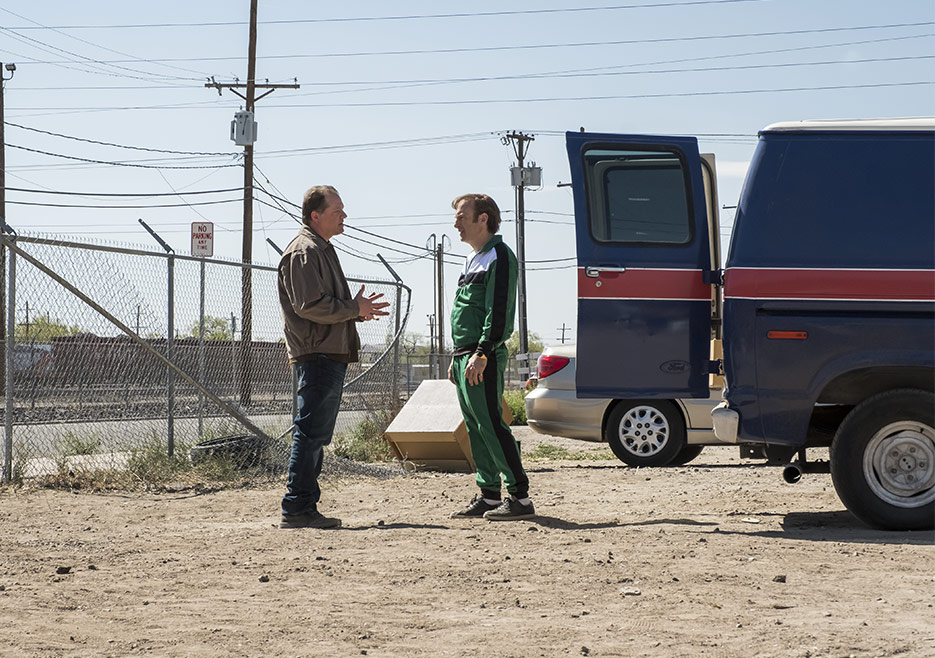 In this week’s “Something Stupid”, as we’re being introduced to Gus’ cavernous underground lab mid-construction, “Big Rock Candy Mountain” plays – it’s a folk song about a hobo’s idea of paradise. Of course, these work conditions don’t bring to mind any images of sunshine or lemonade springs or blue birds singing, and it’s a cruel reminder of the characters’ reality and the inevitabilities we’re facing as an audience this season. “Something Beautiful” (episode 3) showed Kim looking ahead at her future as a lawyer, and “Something Stupid” shows us that future realized.

Last week, I had mentioned how each little arc within this season had culminated to the point where it required a time-jump, and, sure enough, “Something Stupid” starts with advancing us eight months ahead through one of the show’s most beautifully executed and heartbreaking montages. It is the show’s most courageous teaser yet, taking massive leaps in terms of characterization as opposed to walking us through each day or week over the course of a few episodes or a whole season. A single black line splits the frame into two halves. Jimmy crosses the divide to pour Kim wine, and she crosses it to drape her leg over his. By the next shot, they are beginning their mornings apart – the change is so sudden we barely have time to process it and, before long, there’s no going back. From June 2003 to January 2004, the adoring pair that had sweetly tended to wounds in front of a mirror just two episodes previous is barely recognizable. It’s narrative whiplash.

Kim would rather squeeze her stress into a ball while Jimmy would hurl it at a window hoping to catch it. He’s up late watching movies while she’s passed out in bed and covered in PPD casework. A Frank & Nancy Sinatra cover song winds down singing “I love you” while they’re separated by location – Kim is still at work pulling files while he’s at home feeding his goldfish, the very fish responsible for his connection to the vet and the ABQ criminal underworld – they are playing opposing sides of the law, growing distant with each passing month, and the teaser closes with Kim’s side of the divider darkening (after all, the song is over and this cover version isn’t a duet anyway) as Jimmy stares off despondently, counting down the days until he gets his law license. But what exactly is Jimmy looking forward to, especially since Kim has already moved on and grown larger within Schweikart & Cokely?

At the S&C dinner party, Jimmy is behaving just fine, impressing all of Kim’s colleagues and playing up his charismatic self, until he finds her office, closes the door, and looks around as if to reminisce and ponder over the future he had thrown away with Davis & Main. Kim wouldn’t even be working for Schweikart had Jimmy not brought Sandpiper Crossing to HHM – a strategic move engineered by Chuck himself – so it’s not surprising to see Jimmy calculating the room’s square feet by counting 10 footsteps. Earlier, he had counted 6 steps wall-to-wall in his newer offices with Huell Babineaux (“pretty big,” Jimmy had said), so it’s fitting that Mr. Babineaux is the glue to this episode’s framework and the subplot that it’s setting up for next week. Jimmy is envious.

In the same way that Hector Salamanca is trapped under Gus’ penchant for slow, methodical torture, Kim is trapped between love and reputation. At the dinner party, Jimmy forces out this Saul-Goodman-esque laugh as Richard Schweikart points to him and says, “Employees only.” It’s a laugh eerily similar to that smile Chuck might offer when he was anything but amused. Jimmy proceeds to conjure up wild ideas regarding S&C’s client outreach (“matching ski slope jackets”), harkening back to the days where Jimmy’s client outreach methods for Sandpiper residents were scrutinized by Chuck – of course, anything related to Sandpiper is going to raise a red flag in Kim’s mind, especially since S&C is Sandpiper’s legal representative.

This is the first time Kim appears embarrassed on behalf of Jimmy’s actions – it’s not so much his drunken tangent on ski slopes as it is the past eight months of absolutely zero change – Jimmy has not woken up, and Kim is growing tired of it. She’s now getting a glimpse of how Chuck saw his little brother: stubbornly incapable of overcoming ethical hurdles. Jimmy is sabotaging their relationship, and for what? Because he can’t allow himself to feel grief? Because he can’t let Chuck win? Chuck is winning! Jimmy is slowly hurting everyone around him, despite his child-like heart. It’s just as the undercover cop fires back at him: “So long as you make a buck, the whole world can go in the crapper?”

“You do your thing, I’ll do mine,” Jimmy tells Kim, but she’s finished with feigning naivety and turning a blind eye to his antics. “Come on, what does that mean?” she asks. He says, “Don’t worry.” It’s time for Saul Goodman to take over. He takes care of the “low-lifes”, as the undercover cop refers to them, because while Kim has now devoted herself to saving the youth from becoming the Jimmys of tomorrow, Saul is Jimmy’s version of sparing himself a painful transformation – little does he realize, though, that pain will come regardless, and with each new delay the pain grows tenfold.

“Something Stupid” is a BCS-first for director Deborah Chow and writer Alison Tatlock. Together, they breathe fresh air into the show, backed by Chow’s wonderfully varied directorial experiences (Mr. Robot, Jessica Jones, Iron Fist, Fear the Walking Dead) and Tatlock’s writing on such shows as Halt and Catch Fire, Stranger Things, and The Whispers. The BCS team is not afraid to turn over the reins this late in the season to newcomers, and it pays off. Chow, coupled with Skip MacDonald’s masterful editing, knows exactly how to shoot a game-changing teaser. And Tatlock writes these characters as if she’s done it before, but with a unique challenge: she’s refamiliarizing us with characters we haven’t heard speak for eight months – and therein lies the reason for giving control over to fresh blood this late into the season – Chow and Tatlock are reintroducing McGill and Wexler because, while everything may appear somewhat familiar, these are different characters now. Jimmy and Kim have changed in what feels like a blink of an eye.

Meanwhile, as Gus prohibits Hector from recovering his speech, Mike is learning German from Werner Ziegler. Interestingly enough, as Werner points out, the last name “Hermantrout” translates to a combination of words meaning “world-class strength” – Mike couldn’t care less, knowing all-too-well of the gifts and burdens of his skills, unlike Jimmy who is still reckoning with his own.

“Something Stupid” displays each character reconciling their respective strengths and weaknesses – Mike with his impeccable intuition, Gus with his strategy and vengeance, Huell with his quick hands and act-first-think-later attitude, then Kim with her resourcefulness and her loyalty – with the respect to Batman and his villainous psychological counterparts, every BCS character this season is reflecting back to us the very lessons that Jimmy is refusing to accept at every turn. If each season makes a case for Saul and Gene, let’s review what Jimmy loses with each season finale: first, it’s his best friend Marco, second, it’s the proverbial nail-in-the-coffin for all semblance of trust between the McGill brothers; third, it’s another death: Chuck himself. The next logical domino to tip over, as much as we don’t want to believe it, is the trust of Miss Wexler; and so, goes the pattern: death, trust, death, trust. Looking ahead, the season 4 finale’s title is “Winner”, but at this rate, the last person to win anything this season is Jimmy McGill. He’s losing big time.

-Yikes, eight months later and Kim is just now learning about his drop-phone sales scheme. Not only that, but Jimmy’s plan to sour the cop’s image by getting him to smell like alcohol reminds me of when he and Kim hatched a plan with Huell planting the cellphone battery in Chuck’s pocket to make him look crazy in court – only this time, Kim refuses. She’s doing things her way this time. I suspect she’s gunning for a civil rights protest with all those art supplies.

-“A scumbag disbarred lawyer who peddles drop-phones to criminals,” ADA Suzanne Ericsen says. Ouch. Ericsen was last seen in Season 2, trying to get Mike to come clean about his amended statement regarding Tuco Salamanca. Ericsen was tough then, but she’s even tougher now. In the same way that Hank Schrader saw right through Jesse Pinkman, Ericsen sees right through Huell and whoever else Jimmy or Saul represents.

-“You don’t know the full story,” Kim replies to Ericsen before leaving the courtroom. It’s not a defense or an excuse of the man she loves, but it’s a response of empathy. She knows what he has become but she believes he is more than that, and that’s why she can’t not help Jimmy or any young kid resembling him. Her cast is off, but another car wreck isn’t the only threat. Following the pattern, if season 2 jeopardized Jimmy’s law career, then season 4 may be risking Kim’s.

-It’s a new year! Where’s Nacho? Where’s Howard and how is HHM holding up? I suspect they’re returning next week.

-Colby French played the undercover police officer perfectly. He’s been in show business for some time now, playing a cop on other well-known shows, but I appreciate his comfortable nature in “Something Stupid”. I hope we get another moment with him in the future.