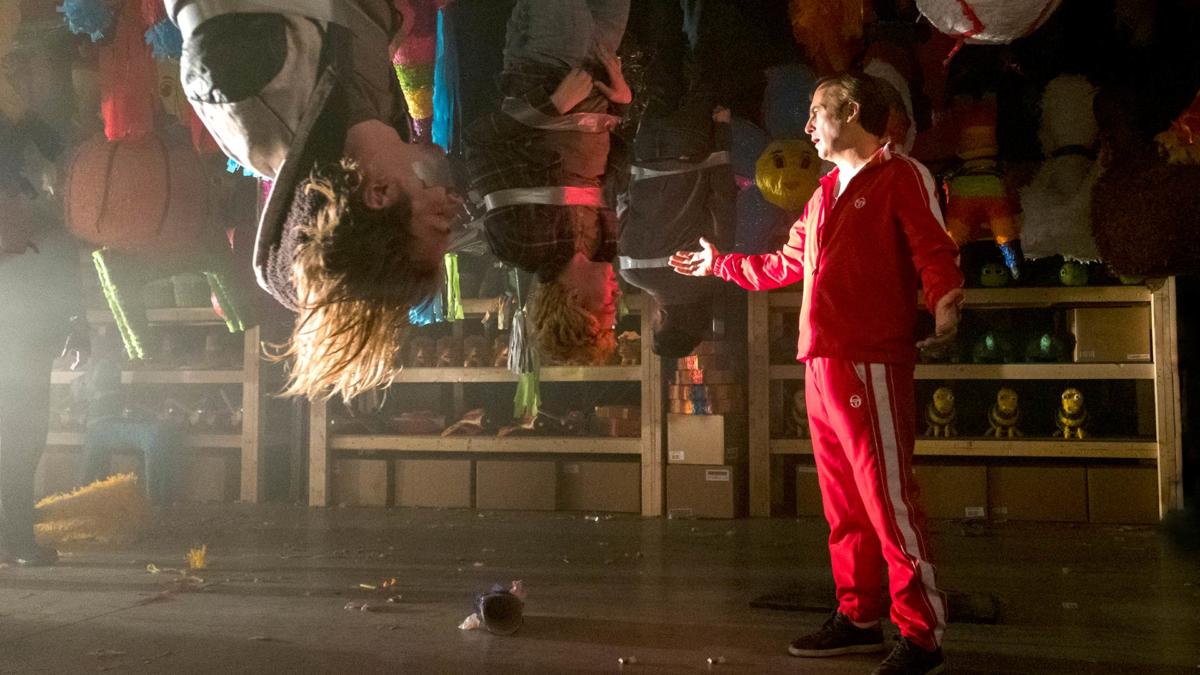 And thus begins Act 2 of Season 4. “Piñata” was directed by Andrew Stanton, known for his ability to capture both the blue abyss and infinite space, from Wall-E to Finding Nemo, and now the strange Gould-Gilligan vision of Albuquerque, New Mexico. Stanton is skilled when it comes to painting grand moments, whether it’s Gus’ new warehouse for his super lab engineers or it’s Howard Hamlin telling Jimmy to “fuck off”. You couldn’t ask for more skill in an episode. Stanton’s direction compliments Hutchison’s writing beautifully, settling us in for Gus’ trip down memory lane in a darkened hospital room, a haunting scene expertly cut by Chris McCaleb. It’s a scene that could easily be dismissed as a simple tale of revenge and torture, but its visuals and pacing beg our attention – in all actuality, it’s a scene in disguise with many moving story pieces.

While Hector Salamanca lies incapacitated in his hospital bed, Gus recounts a childhood memory of the coati, a member of the raccoon family living in South America. As a child, Gus had nursed a lúcuma tree back to health, patiently watering it until it grew back stronger. Then the coati ate the lúcuma fruit, a fruit commonly used in a Chilean dessert for its maple and sweet-potato-like flavor. Gus’ response was to capture the coati and make it suffer until it finally died. Sure, this is a threat. It’s also Gus just talking to himself, giving us a glimpse into a character’s past we weren’t ever sure we’d become familiar with.

Gennifer Hutchison wrote this week’s “Piñata” – she earned her start writing a series of Breaking Bad webisodes in 2009, and she went on to write three regular series episodes with very Gus-centric plots, so it makes sense for her to be writing “Piñata” where Gus is recounting a bit of his childhood. More than that, Gus’ story echoes Breaking Bad’s 5th season “Salud”, also penned by Hutchison, where Walter White tells his son, Walt Jr., about how his own father suffered from Huntington’s Disease. Walt’s childhood memory of his father’s rapidly declining health still haunted him, so much to the point that he feared how Walt Jr. might someday remember him. The key thread here is pride and family, two central concerns of Hector Salamanca, as well as the device of peering back into one’s own past and asking, “Where did things go wrong?”

Hutchison also wrote our final moments with Chuck, and his cruelly prophetic last words to his brother which still loom over all of Season 4. It’s only fitting that Hutchison gets to be the first writer to reintroduce Chuck since his death, through a flashback – and she uses this opportunity to explore why Jimmy would be curious to study the law in the first place. It’s not overtly stated, but his motives are tied up mostly in his feelings between Kim and Chuck.

Clearly, the thought of forever working in the mailroom while Miss Wexler advances ahead to work with more esteemed individuals such as his brother gets Jimmy thinking – maybe he could be that kind of individual, too. This flashback precedes Season 1’s “RICO” teaser where Jimmy passes the bar exam and Kim embraces him for a kiss, so it’s undetermined whether or not they’re dating in Season 4’s “Piñata” teaser. That said, it’s safe to say that Jimmy is probably motivated by the desire to not only impress Kim, but also keep pace with her. Between the need to impress her or his brother, Jimmy can’t decide what he himself wants, and therein lies the conundrum of Season 4.

When Chuck died, we assumed Jimmy’s response was one of grief, but now, in retrospect, that scene of him sitting on the bench in front of Chuck’s burnt out house carries more context: what is he supposed to do? If he chooses to be sad, Chuck wins. If he chooses to obey the law, Chuck wins. If he chooses to bend the rules, Chuck wins. As a result, Jimmy was paralyzed while everyone else did laps around him. He didn’t cry. He didn’t seek out therapy. Instead, similar to what Gus was saying in his monologue to Don Salamanca, Jimmy’s waited patiently and worked hard to get where he’s at. In a way, Jimmy is like the lúcuma tree, nurturing himself back to health, and Chuck was the coati sweeping in for the kill – so, what’s changed? The coati has suffered and died, the will has been executed, and it’s time to move forward, but how did we get to the point of Jimmy capturing these kids like three helpless trickster raccoons, hanging them upside down like piñatas, and threatening their lives?

For starters, Kim squashed his dreams of resurrecting Wexler-McGill. Remembering the teaser, we know how important it is to Jimmy to keep pace with her, and he knows he’s never going to keep pace by dawdling around the cellphone store – instead, he’s working with the criminals, just like she is but instead on the other side of the law. He’s making his underground connections so, by the time he’s got his law license back, he’ll be bigger than ever. “Nine months and twenty-four days,” he said in last week’s “Quite a Ride”, quickening his pace to such a degree that someday he’ll look back on it all and wonder where exactly things started going wrong.

It’s never been one singular decision: tearing up the post-it-note with the psych’s number, telling the insurance company about Chuck’s meltdown in court, switching out the address on Mesa Verde’s paperwork to compromise Chuck’s integrity, or orchestrating his own firing from Davis & Main – and no amount of course-correcting can fix the past. Ultimately, as we saw in Season 4’s “Breathe” where Jimmy sabotages his copier salesman job offer, his largest contender is his own self-awareness that he can do pretty much anything and get away with it. Boredom and curiosity, when coupled with the need for love and acceptance, can be dangerous tools, especially in the mind of James McGill Esquire (or Jimmy, or Saul, or Gene – whomever he chooses to be as soon as the previous Not Really Him dies off).

– This whole thing with characters calling each other out, specifically any scene with Howard, is some of the most electric writing this show has produced – it’s the sort of thing that only happens when the writers have taken their time to carefully craft these relationships. Patrick Fabian knows just the right amount of energy to provide his counterparts.

– I’m anticipating a time-jump at some point, now that we have 6-9 months for the super lab’s construction and 9 months for Jimmy’s return to the law. There’s no way we’re going to reach those conclusions within the next four episodes, but if that’s true then what moments are we building toward this season? I’m guessing the answer lies with Nacho.

– Structurally speaking, since the Disappearer was mentioned at the end of the first five episodes, it would be great if the writers could somehow introduce the Disappearer this season and whisk Nacho away at the end, but I just don’t see how they could possibly find the time. Again, I don’t know what we’re building toward – some sort of confrontation between Kim and Jimmy, and HHM’s future being jeopardized, but the Mike and Gus situation feels too safe. The risks are there for Nacho, but I don’t feel any for Mike – it could be the fact that he survives just fine until the parent series begins, but with the Salamanca twins out of the picture and his daughter-in-law forgiving his behavior at group therapy, I’m not sure what stakes are left. Maybe something with Lydia or this unruly super lab engineers, Kai.

– That scene with the piñatas looked so damn cool. This whole season has looked great, but this episode had some absolutely stunning shots.

– I’m eagerly anticipating Dave Porter’s next soundtrack release for this show – we’ll get to hear compositions from Season 3 and Season 4. This season has a lot of callbacks from previous seasons, small accents here and there that recall an old mood in a different context. I highly recommend finding the Better Call Saul original soundtrack on whatever music streaming service you’re using.