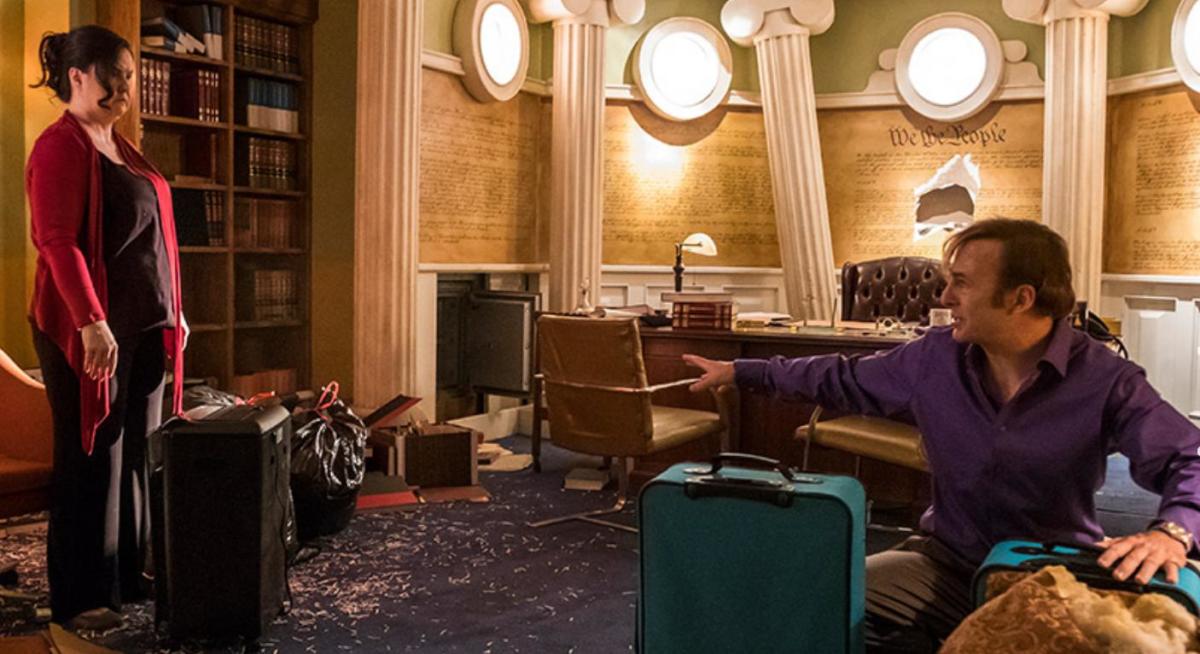 I was asking myself throughout all of this week’s “Quite a Ride”, why open with a scene from Breaking Bad in this episode specifically? Sure, it’s the mid-way point of the season, but what is every subsequent scene saying about that teaser? Let’s start with the fact that it’s technically a prologue to Breaking Bad’s “Granite State” where Saul Goodman makes his final appearance before we see him again, after some indeterminate passage of time, as Gene at the Cinnabon.

In the teaser, Francesca is shredding files and collecting them in bags while Saul breaks through the wall to grab the shoebox full of memories we first saw in the Better Call Saul pilot (him smashing through the wall reminded me of Chuck dismantling his house—it must be a brotherly thing—when the empire crumbles, the only thing left to do is to literally tear it down). But it’s that final goodbye to Francesca that lands the scene, and that last dolly shot where he makes a call to the Disappearer, with the tilted column behind him – it was a good run – it’s a strong image to bookend the episode, the ending being where Jimmy tells his PPD Supervisor that, in nine months, he’s going to be a lawyer – and a damn good one, he’s decided.

“Quite a Ride” is the third episode written by Ann Cherkins, her second episode being Season 3’s “Off Brand” where the Saul Goodman character was invented through a self-made commercial designed to help sell his remaining air time. Cherkins’ first episode was Season 2’s “Rebecca” where we met Chuck’s wife in a flashback and also watched Kim remain completely silent while Chuck recounted how Jimmy once embezzled money from their father’s business. If you were to watch all of Cherkins’ episodes in succession of one another, you would notice the parallels right away – Chuck and Rebecca, Jimmy and Kim – you would witness the birth of Saul and the death of Saul. 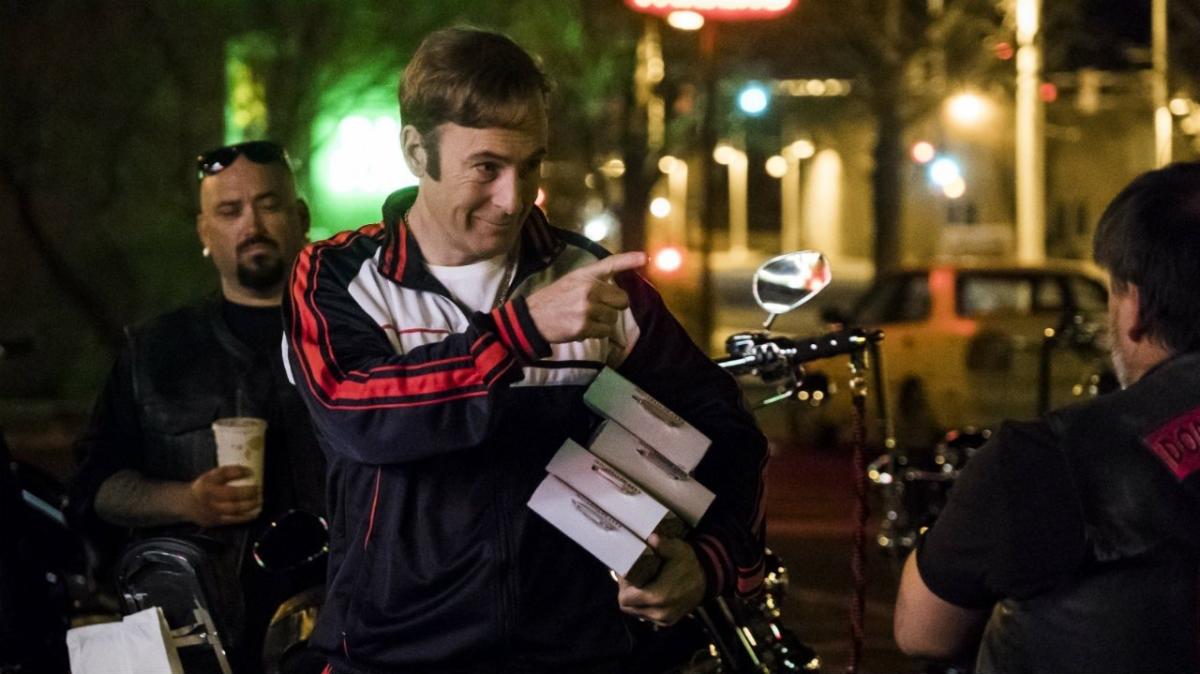 “It’s all good!” Jimmy tells Kim, echoing the phrase he explained to her back in “Off Brand” (It’s Saul-Good, man), before sneaking off into the night to type out receipts in a darkened store for cellphones he hasn’t yet sold, mirroring the version of Jimmy that Chuck had recounted to Kim in “Rebecca”, that little boy stealing money from his father. He hasn’t changed. “You’ll never change,” Chuck would say, “You hurt people. That’s what you do.” Of course, Jimmy’s swindling leads to him being hurt, losing all that money and getting the shit kicked out of him (also reminiscent of Saul, the resident punching bag of Breaking Bad).

Kim applies alcohol to his wounds as he winces, then he proceeds to tell her, in a veiled confession, that he was one of those kids once, the kind of kid that takes advantage of people and steals their belongings. Kim says that’s not him any longer, and instead of continuing with the confession he nods – in a way, he’s hoping that she’s right. And why can’t she be? She now spends her days assisting young adults turn their lives around, preventing them from growing up and becoming a damaged Jimmy McGill or developing a scheming alter-ego like Saul (a Saul-ter ego?). But the trick is that they have to listen to her. It’s up to them to seize the opportunity to change for the better, in the same way that Kim can’t force Jimmy to go to therapy.

Speaking of therapy, the scene with Howard Hamlin in the bathroom is our first real moment this season where Jimmy’s decision to tear up the number and flush it down the toilet shows us how self-deluded he’s become. He sees what therapy is doing to Howard, and he wants nothing to do with that. Why should he? He’s doing fine! He’s holding down a job, he isn’t falling apart or forgetting how to dress himself or suffering any insomnia – but appearing normal isn’t necessarily a sign of good mental health – in fact, when compared to Howard, while Jimmy may seem the most put-together, he’s also the one who needs the most help.

Maybe Howard is having a nervous breakdown, but he also seems more freed up from that HHM sheen, that false glowing image he was burdened to portray while Chuck was still around. While everyone else is actively trying to enact change within their lives (Howard, Kim – Nacho’s attempt to leave the cartel, or Mike’s burgeoning relationship with Anita), Jimmy is doubling down on all of Chuck’s cruelest accusations of his character – because if Jimmy were to try and change who he was and do the right thing, then Chuck wins.

I hope Michael Morris gets to direct more episodes, because he nailed this one. And “Quite a Ride” was his first episode for the ABQ Crew! Of course, “Quite A Ride” only benefitted from having Skip MacDonald editing. The best examples were the various shots of Jimmy on the couch watching Doctor Zhivago all alone, and that sequence with Mike vetting a structural engineer for Gus – the claustrophobic shot with the bag on his head, and that long ride in the back of the van with the light peering through the holes, using the long take with the first engineer to setup a shorter take for the final engineer that Gus chooses – it’s all done so methodically, and the execution compliments Gus’ own precise nature.

Gus chooses Werner Ziegler, the loveably motion-sick German, over the other engineer, particularly for his thoroughness and realistic attitude toward the immense undertaking of building an underground lab without anyone noticing. Gus requires expertise and confidence out of his employees, and, above all, the willingness to set aside their egos. This whole sequence, in light of the Breaking Bad teaser as Saul’s office, serves as a nice reminder as to why Gus had initially refused to work with Walter White – he had a gut instinct that Walter exercised poor judgement – but, ultimately, because Gus had been planning to expand overseas into Europe for many years, he took the risk. So, Gus, was it worth it? Was it a good run? If anything, it was quite a ride.

– Patrick Fabian’s performance this season has been stellar, forced to do a complete-180 from the Howard Hamlin that we grew so familiar with. It will be interesting to see if he continues practicing law with HHM, especially when he had expressed envy of Kim for taking the initiative to leave and start her own practice.

– The cellphone-swindling sequence was not only fun, but it also paralleled Jesse Pinkman going to the same Dog House in Season 1 of Breaking Bad and bringing Walter a prepaid cellphone.

– “Quite A Ride” feels like the finish of a five-episode chapter. That being said, what’s next? Maybe we meet the infamous Lalo. Maybe Nacho manages to escape the drug world by the season’s end. Maybe Kim quits or lets down Mesa Verde. Maybe Howard sells his suits and goes into professional backyard parkour?

– Seriously. Michael Morris killed it on shooting this episode. That shot in the bathroom with Kim and Jimmy in front of the mirror? Gorgeous composition.