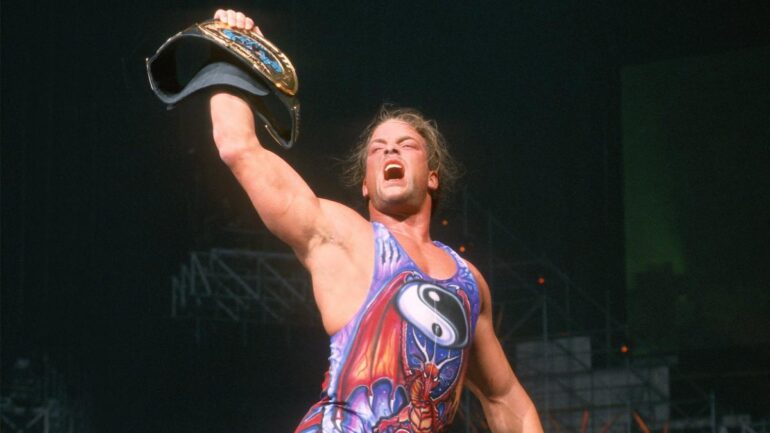 Not every superstar can become WWE Champion; more often than not, the highest peak any given performer will achieve will be a run with either of the mid-card championships. Of course I’m referring to the equally historic Intercontinental and United States Championships, which despite their respective tenures in the wrestling world, have diminished in prestige to the point where holding the title doesn’t mean a great deal for your career.

The two titles have seen through ring veterans and wide-eyed newcomers alike, promising a bright future for many, but for the most part failing to provide that necessary stepping stone. Occasionally, a few mid-card champions do in fact go on to become the star attractions the company hoped they’d be — you just have to look at how the mid-card championships spring-boarded the likes of The Rock, Shawn Michaels and John Cena. But when you think back on the impressive lineage of both titles, chances are the first names that come to mind will be those that have been long considered ‘perennial’ champions.

A plethora of superstars have been resigned to the mid-card spot, either by their own humble accord or by decree of creative booking (or lack thereof). In a way, many of these perennial mid-carders have been instrumental in moulding the stars that have headlined WrestleMania, those that will go down as legends in years to come.

In this piece, we’re going to show some love for the best WWE mid-card champions, those that may have garnered an impressive following, but slipped through the cracks of the WWE hierarchy, giving way to more ‘preferred’ main-event stars.

Make sure you do the same for your own favourite mid-card champions in the comments below.

‘The Whole F’N Show’ often found himself involved in some of WWE’s hottest feuds, mostly due to his likeability as one of RAW’s top babyface stars. Because of that popularity, RVD was regularly featured in mid-card title feuds against the likes of Chris Jericho, Christian and Eddie Guerrero, meaning he was able to amass quite the collection of Intercontinental title reigns.

This provided us with some instant classic IC title matches, akin to those put together by the greats. Ones that immediately come to mind include the Ladder matches against both the aforementioned Christian and ‘Latino Heat’, as well as his later hit title matches with Shelton Benjamin and Cesaro.

RVD was the perfect superstar to leave at the top of the mid-card, whether he’d be getting that first big pop of the night, or comfortably stealing the show before anyone started thinking about the main event. I just wish we could have said the same about his WWE Championship run in 2006, which flopped massively after only two weeks.

The current 24/7 Champion has had a pretty decent history in the mid-card. A former United States and Intercontinental title holder, Shelton Benjamin was killing it in matches against some of wrestling’s greatest in the mid to late 00’s. Originally, you could have penned Shelton to join his OVW ilk in the main event scene by the end of the decade, but unfortunately the blue-chipper was destined for a lifetime in the mid-card.

Shelton dipped in and out of title reigns and consistently put in 100% in his matches, proving to the world that he was a reliable performer and deserving champion. Benjamin’s stock diminished eventually, and he’s only recently been able to pick up momentum again as part of MVP’s new Hurt Business stable. Here’s hoping that WWE return to the norm of placing the mid-card title around Shelton’s waist.

‘The Swiss Superman’ hasn’t had the most mid-card title runs, in fact at this point he’s probably considered more of a perennial tag champion than he is singles, but nevertheless, WWE can’t seem to scoop Cesaro out of the mid-card.

Cesaro has competed for both the mid-card championships, winning the US title during his first run on the main roster. Since dropping said championship to fellow perennial mid-carder, Kofi Kingston, Cesaro has occasionally flirted with winning either belt, yet never capitalised on it.

You might consider it a slight cheat to include him on a list of perennial champions, but thinking about how many times Cesaro has found himself competing against IC and US champions and delivering some of the best performances of the night, he more than deserves a spot here, even if it’s as perennial challenger. Just go back and watch his battles with Rusev, John Cena and that belter of a Fatal 4 Way against Miz, Kevin Owens and Sami Zayn a few years back. Need I say more?

One of two of the greatest perennial mid-card champions of our era, ‘The Show-Off’ has lived up to his moniker while competing for the coveted Intercontinental and United States title belts. Dolph Ziggler has been one of the few to actually break through into the main event scene, capitalising on his incredible run as Mr. Money in the Bank in 2013, but despite his occasional return to the WWE Championship picture, he’s ultimately returned to where he suits best.

His matches with the likes of Kofi Kingston, Rey Mysterio, MVP and the next entrant on this list have been spectacular, worthy of going down in history as some of the best mid-card battles of all time. Unfortunately, Ziggler’s attitude may keep him from sharing the same conversation as Randy Savage and Ricky Steamboat, but for now we can at least appreciate his stellar performances as part of the mid-card.

The yin to Dolph Ziggler’s yang, The Miz is without doubt another of the greatest perennial mid-card champions of our time, a superstar that has put in the work to improve and evolve into someone that we can all be proud to call our champion.

During his last two reigns with the Intercontinental Championship, Miz did everything he could to restore prestige to his title and ensure that it would once again be seen as the workhorse title, putting it on the line in matches against established main event talent like Roman Reigns and Seth Rollins.

Miz achieved everything he set out to do and more, later going on to wrestle as one of the most over babyfaces on the show at the next two WrestleManias. Miz has since hung his cap in the tag division alongside John Morrison, something which is becoming somewhat of a discredit to the work he put in as part of the mid-card. Here’s hoping that we see Miz step back into the role he’s so very comfortable in, and pick up the US title on SmackDown Live sometime in the near future.

Booker T may have made his name as a 5 Time World Heavyweight Champion in WCW, but it seems that his legacy will forever remain in the mid-card.

Upon reaching the hallowed halls of WWE, Booker T worked his way up the ranks towards the Intercontinental and United States titles, following Rob Van Dam in becoming one of the most beloved babyface acts on the show.

Booker transitioned from putting together classic bouts with John Cena and Chris Benoit over the United States Championship to feuding with Chris Jericho and Christian for the Intercontinental Championship on RAW. Wherever he was drafted to, he’d make sure their mid-card was on form.

Booker T would later breakout of the mid-card, much like he did in WCW and become one of the WWE’s headlining stars throughout 2006, but it’s a far-cry from his competitive, psychology-heavy matches that you’d find during his days as one of WWE’s top perennial mid-card stars.

The General Manager of NXT was once considered one of WWE’s top mid-card stars throughout the 2000’s. Since jumping ship from WCW, Regal was thrust into the Intercontinental Championship picture after a brief run as the Commissioner.

Regal would bring his hard-hitting, no-nonsense style to WrestleMania in fantastic IC title matches against Rob Van Dam and Chris Jericho respectively, then later pick up where he left off in title bouts against CM Punk in 2008.

Regal may not have lived up to those hopes of seeing the first-ever British World Champion, but he definitely killed it as a perennial mid-card champion. Regal is an absolute legend and deserves all our respect, if not for his hilarious comedy skits alone, then for his incredible performances as Intercontinental Champ.

‘The All Mighty’ returned to WWE with so much fanfare that everyone assumed he’d steamroll into the main event scene and give Brock Lesnar a run for his money. Unfortunately, Lashley never quite manage to get over the hump of Roman Reigns (despite beating him) and was relegated to fighting for the mid-card championship once more.

In the past, Lashley had captured the United States title and ECW Championships (which, let’s face it, was pretty much a glorified mid-card title). While holding onto those two titles, he delivered on some of his more exciting matches in feuds against JBL, Finlay and William Regal. Lashley excelled when butting heads with the more experienced mid-card heels, which is precisely what he’s continued to do in his current run.

His IC title matches against Rollins, Ambrose and Balor were good fun, as have his recent battles with Apollo Crews over the new United States Championship. It seems that Lashley has found his calling in the mid-card as one of today’s perennial champions, no complaints from me so far.

Even though we’ve experienced the thrill of KofiMania, New Day member Kofi Kingston will forever remain a perennial mid-card champion in WWE.

Much like his predecessors, Booker T and Rob Van Dam, he’s a likeable babyface that kept selling merch, making him the ideal candidate to be positioned at the top of the mid-card. Kofi picked up numerous IC and US title runs throughout his early career, before becoming the tag specialist he is today.

I would argue that his matches against Dolph Ziggler, Sheamus and Chris Jericho during this time were better than those he put together as WWE Champion last year. Kofi had a lot to prove to the wrestling world, and he left everything in the ring in the name of making the two mid-card belts mean something for the young stars of pro wrestling.

Kofi was a standard bearer and dependable asset all in one, it’s shocking it took them this long to give him a run in the main event scene.

Up until this past weekend, Jeff Hardy had returned to his role of being one of WWE’s most prolific perennial champions. Whenever not fighting alongside his Broken brother Matt, Jeff Hardy had been ducking in and out of Intercontinental and United States title reigns, making his singles career just as successful as his time in the tag division.

Jeff is one of those stars that WWE just can’t help but make money from, so there’s no surprise that he was positioned so well in the mid-card throughout his career. Even after securing a couple of World Heavyweight Championships, Hardy just kept coming back for more IC titles and kept on delivering on those high-profile matches with the best and brightest stars.

With Sami Zayn now claiming the title of Undisputed Intercontinental Champion, I suspect we’ll see ‘The Charismatic Enigma’ challenge for his mid-card championship once again in the near future.

READ NEXT: 5 Trades That Need To Happen In WWE Draft 2020