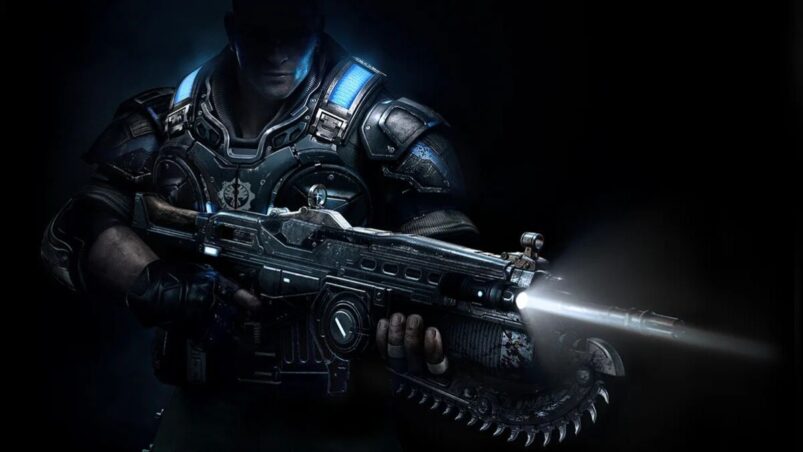 Gaming is filled with a host of iconic weaponry, whether they’re huge tools of destruction or something that challenges you to rethink your environment. Well, we’re deciding to celebrate all of the best ones, and today we’re heading over to the world of big dudes with bigger guns in Gears of War to talk about its poster child of a weapon: The Lancer.

For fans of grimdark fantasy who don’t exactly have the dexterity or patience to paint Warhammer 40K figures, there’s always the Gears of War series. The similarities are obvious, with a bunch of beefy lads massacring humanoid monsters under the auspices of a fascist government by using weapons that are capable of causing massive amounts of blood, guts and gore.

The Gears of War series has many beautiful instruments of death with which to cause mayhem. The Longshot stands up as one of the best sniper rifles in all of gaming, mainly because the Gears headshot noise is brilliant, while the Gnasher shotgun has become the face of twitchy, wall bouncing, one hit kill multiplayer. However, the real standout of the Gears series is the gun that’s basically started it all: the Lancer.

At first glance, the weapon doesn’t seem like all that. It’s your bread and butter assault rifle with a big clip and a decent rate of fire, and while it doesn’t exactly excel at blasting Locust compared to other weapons like the aforementioned Longshot, it’s an ever reliable all-rounder that’s great to have in a pinch, especially with the game’s active reload mechanic. Nail an active reload and stick a full clip into a Boomer and the big boy will go down quicker than you’d expect.

It’s a gun that’s perfect for the medium to long range, cover-based engagements that Gears excels in. Sticking behind cover then popping out to pepper a fleeing Locust or Swarm with bullets before retreating to safety is Gears 101, and the Lancer suits that job perfectly. However, it’s the attachment underneath the foregrip that pushes the Lancer from good to a genuinely S-tier weapon, and that’s the chainsaw bayonet.

Bayonets underneath rifles became prevalent during trench warfare as a means of storming the enemy lines headfirst, so making a bayonet the stand out piece of kit in your cover-based shooter is pretty smart. Still, Gears is an edgy piece of sci-fi media, so naturally the bayonet comes in the form of a chainsaw that would make even Leatherface envious.

A one hit kill and the go-to for most noobs when playing Gears online, the Lancer’s chainsaw bayonet gives this medium-range rifle the opportunity to cause some up close and personal damage. It also lets you decorate the vicinity in a nice shade of red. The chainsaw part of the Lancer has been nerfed over the years, as you can be stunned out of revving it while the sound can be a dead giveaway, but there are few delights greater than carving an enemy up with that chainsaw.

The series has improved the Lancer over the years, with chainsaw duels adding some quick tension to what was once a confirmed kill, and while redesigns like the Retro Lancer or the Lancer Grenade Launcher have innovated on the iconic design, you just don’t forget your first. Gears of War’s Lancer deserves its place in this little video game weaponry Hall of Fame we’ve got going on.