12 Best Vampire Books To Sink Your Teeth Into

Get your fangs into these. 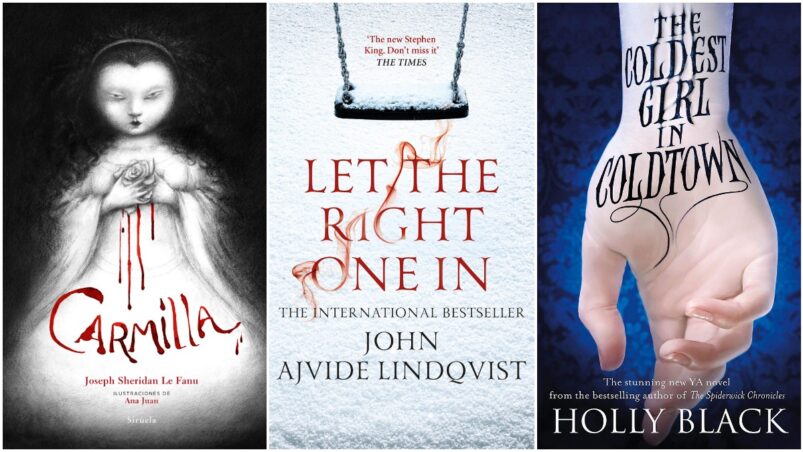 12 Best Vampire Books To Sink Your Teeth Into

Vampires are, of course, a total archetype of horror literature, an archetype that we just never seem to get tired of. There are so many takes on vampires that it is impossible to put together a definitive list of the best vampire books. But thanks to the variety of vampire stories available, and the range of ways in which authors present them, any list of the best vampire books is guaranteed to be full of intriguing characters, plots and delicious horror tropes.

1. A Discovery Of Witches – Deborah Harkness

Thanks to the recent television series, A Discovery Of Witches has been enjoying a newfound popularity. And whilst the show is a lot of things, Harkness’ books are also a fun and entertaining read.

Diana Bishop is a scholar descended from witches, who would rather have nothing to do with magic. But in the library she finds a manuscript that helps her accidentally set a horde of demons, witches and vampires on the library, all looking for the manuscript that has been a much desired treasure. Diana forms an alliance with Matthew Clairmont, a vampire geneticist, and sets out to break the spell.

Some amazing horror and paranormal literature comes out of Japan, and A Small Charred Face deserves a place as one of the best vampire books. It has an inventive take on the concept of vampires that goes quite significantly beyond the normal tropes.

A Small Charred Face is divided into three sections, all of which function as a separate story within a larger narrative. Kyo is a boy saved by Mustah, a Bamboo (vampire), who takes him in when Kyp is orphaned. Mustah and Yoji, another Bamboo, raise Kyo as best they can before Kyo starts to realise that they have a plan for him.

Carmilla is one of the oldest works of vampire fiction – older even than Dracula – and any discerning vampire fan should definitely have it on their list. It is in books like these that the ever beloved vampire tropes were born and formed.

It is the story of Laura, a woman who lives a lonely life in an isolated castle with her father. But one night, a carriage appears carrying Carmilla, a mysterious woman prone to wandering around at night. As Laura falls under Carmilla’s spell, she has strange nightmares and feels weaker and weaker. Carmilla is full of sexual tension and gothic romance, like all good classic vampire stories.

As anyone with any knowledge of Terry Pratchett will know, Pratchett is the master of trope-bending fantasy. Vampires feature in several of his Discworld novels but in Carpe Jugulum they receive his specific treatment. Although this book concerns characters who have already appeared in earlier novels, you don’t need to have read them to enjoy this vampire content.

Count Maypyr and his family are invited to the naming ceremony of Magrat’s daughter. Like all vampires once invited in, they decide to stay. But the witches of Lancre aren’t about to let that happen – and even though these vampires have built up a tolerance to garlic and bright light, that isn’t going to stop the witches.

Holly Black is a big name in YA fiction, and The Coldest Girl In Cold Town is her take on vampire stories. Vampires were big in YA for a while thanks to a little-known series called Twilight, but Black and her unique take deserves a place on the list of best vampire books.

In a not-too-distant future, vampires are real and living among us. They are quarantined in Coldtowns, and spend their time luring humans in to become their prey. No one ever leaves a Coldtown once they’re in. Tana is a normal girl who wakes up after a party surrounded by bodies. Her infected ex-boyfriend needs to get to a Coldtown, and it’s a race against time.

No list of the best vampire books is complete without Dracula, of course. Carmilla may be an older book, but Stoker’s main man is the one we always think of when vampires come up. Dracula really has his stake in the market when it comes to vampire archetypes.

Dracula is a novel told though letters, diaries and newspaper articles. Jonathan Harker is a solicitor who takes a business trip to stay with Count Dracula, barely escaping with his life when he finds out the count is a vampire. Dracula comes to England and terrorises Whitby before he is hunted down by Abraham Van Helsing. So many vampire tropes started here that it simply is a must read.

If you’re looking for a black, queer vampire story then do I have the book for you. Published in 1991, The Gilda Stories was truly ground-breaking in telling the story that it did, and honestly it still hits the same even now.

In the 1850s, a girl escapes from a life of slavery and is taken in by a lesbian vampire couple. When she is old enough, Gilda gives her consent to be changed into a vampire herself, and is charged with following the code her guardians live by; you must leave something behind in exchange for the blood you take. Gilda uses her vampire psychic powers to help people, solving their problems as best she can. As the years pass, Gilda learns to face her own traumatic past and puts together her own found family.

The Historian is often called historical fiction, but really it is a work of fantasy loosely inspired by Eastern European folklore. It is a long read, for sure, but if you’re looking for a vampire story that takes a tour of Europe and European culture then this is the book for you.

A young woman discovers a stash of letters in her father’s library that puts her on a dangerous quest – a quest to discover the truth about Vlad the Impaler, the barbaric ruler upon whom Dracula is based. As she unravels more and more of the truth – that perhaps Dracula did exist after all, and he’s still existing in the modern world – she faces danger at every turn.

If The Gilda Stories isn’t enough to get you started with black and queer vampire fiction, then Image Of Emeralds And Chocolate is also a good place to jump off from. K. Murry Johnson’s debut deserves a place as one of the best vampire books for not being afraid to push boundaries of what vampire fiction can be.

Eric is a high school senior taking a creative writing course at university. He dreams of love, something that could be a reality when he is assigned Marquis LeBlanc as a writing partner. Marquis has enrolled on the course as therapy for his severe depression, but when he falls in love with Eric. he has to decide whether to reveal his secret. If you like vampire romance, this is for you.

10. Interview With The Vampire – Anne Rice

There is room for one more classic on this list of the best vampire books, and of course that classic has to be Interview With The Vampire. This is only book one of Rice’s The Vampire Chronicles, so there is plenty more where this came from.

Louis is our narrator who tells the story of how he became a vampire, indoctrinated and turned to the life by Lestat (who would go on to become Rice’s most iconic creation). Louis lives a restless life in New Orleans until he is compelled to go looking for others like him. But finding others like him might not be the answer Louis is looking for.

11. Let The Right One In – John Ajvide Lindqvist

Let The Right One In is better known to English speakers from the film of the same name, but the novel is a great and popular work of Nordic literature, and a really good read in its own right. The book isn’t fun in the way some of these entries are; it’s bleak and creepy and just plain sad. But it also feels like a masterpiece.

In a rundown suburb in Sweden, the body of a teenage boy is found drained of blood. There’s a rumour it’s a ritual killing, but 12 year old Oskar hopes that revenge has come for the endless bullying he endures at school. Then Oskar meets Eli, the new girl next door, and all thoughts of murder go out of his head. Eli is strange, and she only comes out at night. This is a dark and twisted story, but a unique take on vampire stories.

My Soul To Keep is the first in the African Immortals series by Tananarive Due, an expert in black horror and a master of her craft. This series, once again, has a unique take on vampires – one that deserves a place on a list of the best vampire books.

Jessica marries David, a wonderful and attentive family man. But there’s something about him that Jessica can’t put her finger on. Eventually she learns that David is immortal, having traded his humanity 400 years before for the chance to live forever. David’s immortal companions want him back with them, but David is planning on keeping Jessica and their daughter with him. Like Let The Right One In, this book is harrowing in places – but it is also a compelling read.