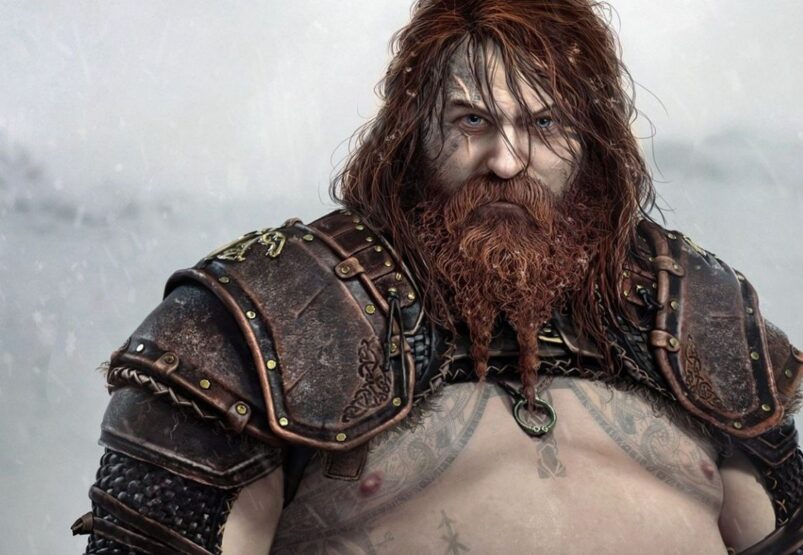 Man comes in all beautiful shapes and sizes, but you wouldn’t know that just from playing video games. For the most part, male characters in games are either chiselled, hunky adonis types or 11 foot tall rectangle men, with some occasional lip service paid to those who are a little bit on the thicc side. Well, no more. We’re here today to gather a veritable beef buffet and celebrate the chunky lads that we love.

The conversation around gaming’s thicc lads seems to have gone into overdrive after Sony Santa Monica revealed their version of Thor in God of War: Ragnarok. Spoiler alert: he’s a big lad, and a lot of people weren’t happy to see functional strength in action. It got so bad that powerlifting champion and world record holder Darren McCormac defended the Thor body when speaking to The Sixth Axis: “Like it or not, God of War’s Thor is the peak of male performance. Why do I say that? As a strength athlete, there is a correlation between bulk and strength.”

Either way, we’re celebrating gaming’s biggest bois with this list. We’ve limited it to just one thicc lad per series, just purely because fighting games alone feature a lot of big lads. Hell, half of this list could be just Street Fighter characters, with a couple of extra additions from other games, but we’ve aimed for a wider variety of large men. Here’s our favourite thicc bois in gaming, not ranked in any order because don’t make me choose between them. 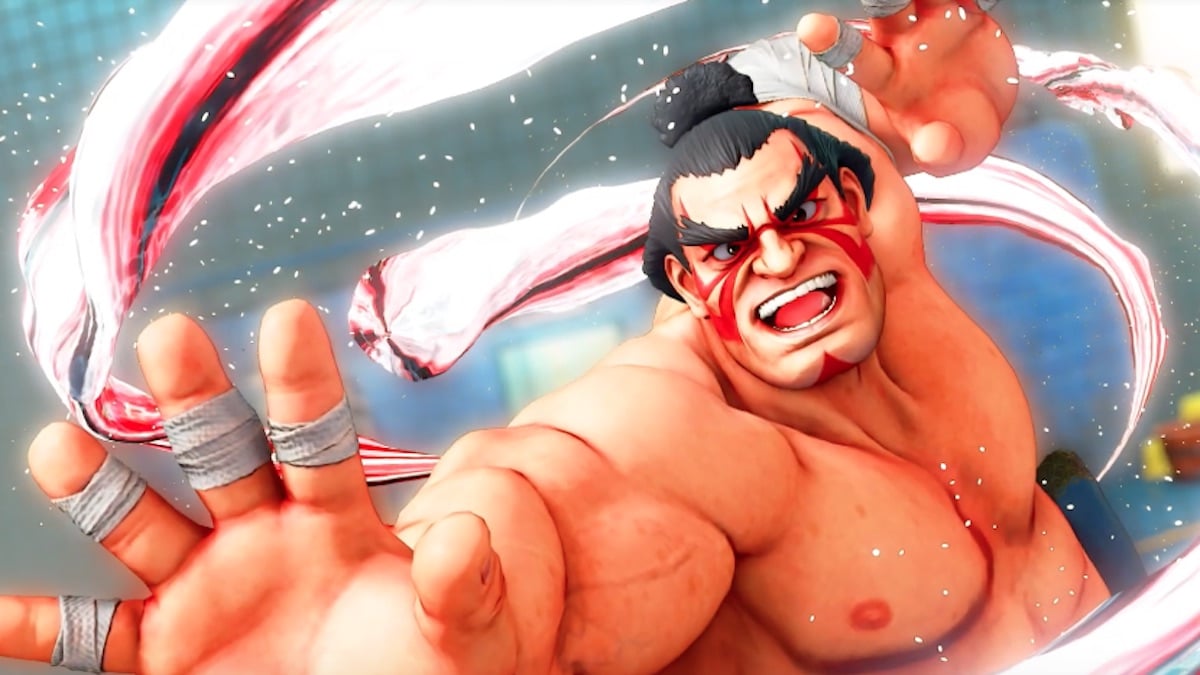 As mentioned, Street Fighter has a lot of large lads to choose from, with Street Fighter IV’s Rufus and Hakan taking the joint crown for being just as thicc as they are weird, while the return of Birdie in Street Fighter V feels like the poster child for just giving up. It’s a bit of a mood. Just sit there, let the belly hang out and eat some snacks. I’m right there with you, Birdie.

However, if we’re just celebrating the one big lad from Street Fighter, it has to be the original, E. Honda. A sumo wrestler feels like a bit of an easy way to represent the larger side of life, but E. Honda is the most influential and recognisable out there. While his build suggests raw power is the order of the day, those lightning fast hand slaps have cheesed their way to numerous Street Fighter 2 victories, that’s for certain. 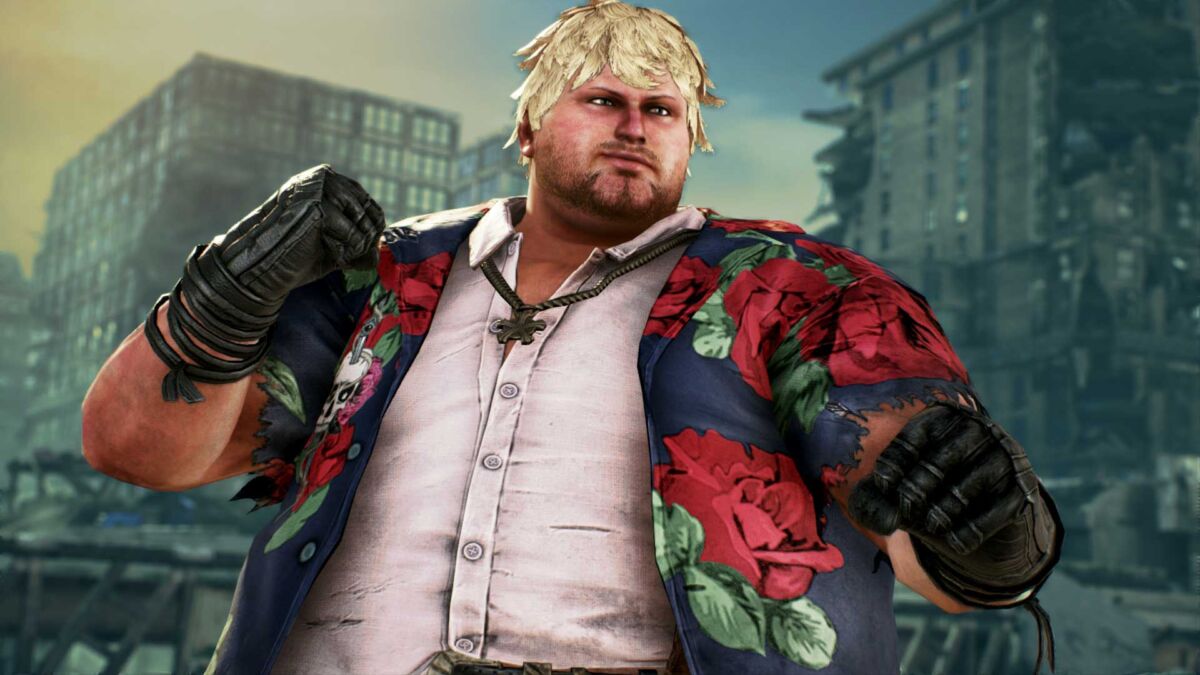 Combining speed and power seems like a winning combination, and for Bob from Tekken, he’s got both by the bucketload. In fairness, Bob is somewhat of a joke character, as his entire character arc is that he was a fighter who boasted incredible speed and technique, but lacked power, so his solution was to bulk up. The results are awe-inspiring.

Bob’s a unique case, in the sense that he’s an incredibly strong dude, but the extra weight hasn’t diminished his ability to do flips and other acrobatics while kicking ass. He even does it all while wearing a sweet floral print shirt. This is a man who does not care for what other people think of him. He’s living his best life and I respect it. 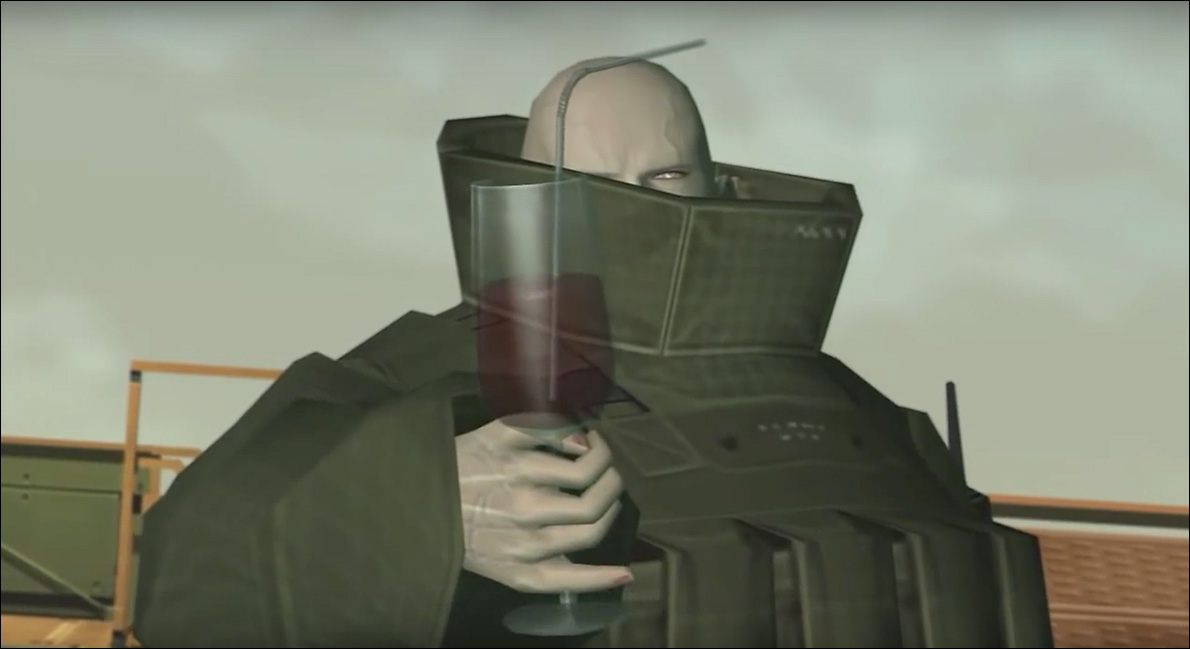 Look, let’s just be honest with ourselves right now that Hideo Kojima doesn’t have the best naming conventions in the world. Metal Gear Solid has featured some weird named dudes in the past (Hot Coldman is a particular favourite), while Death Stranding has the pick of the litter from Die-Hardman, Heartman, Fragile, Mama and more. It’s very silly, but there’s a refreshing earnesty that comes with MGS 2’s Fatman.

If nothing else, at least he’s a bombmaker, and the name is derived from the Nagasaki nuclear warhead, but I’m convinced there was a whiteboard in Konami that just said “FATMAN”, with Hideo and friends cobbling together a story based on the name alone.

Combining size with elegance, Fatman is a boss fight during MGS 2 where he skates around Raiden on roller skates, planting bombs and just generally being a nuisance. He’s also equipped with a bomb suit that’s pretty much impervious to your conventional weapons. However, that spot where his head sticks out looks pretty prone to some tranq shots. 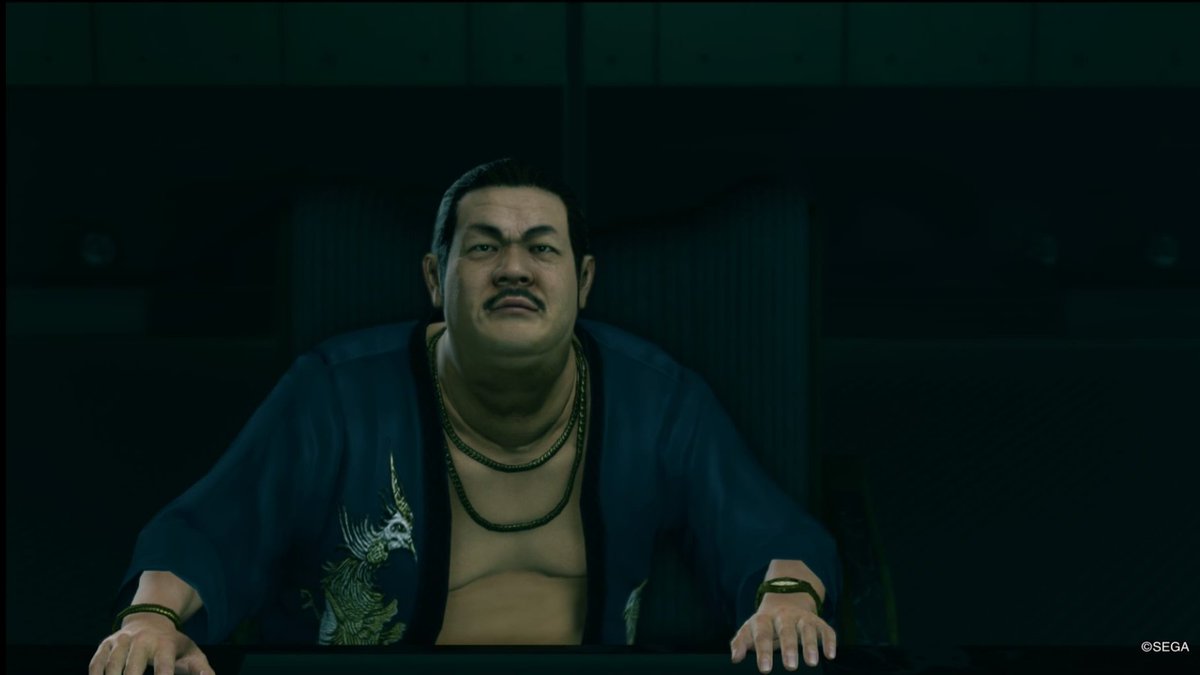 The Yakuza series is no stranger to showing off some of the portly lads that the Japanese criminal underworld is known for, but for the most part, they fit a similar mold as MGS 2’s Fatman: big and bald. Yakuza 1’s Shimano and Yakuza 3’s Kanda spring to mind, but there’s one example who stands out above the rest: The Florist of Sai.

Kamurocho’s preeminent information broker and ruler of the underground pleasure district Purgatory, the Florist exudes confidence in a much different way to the other characters in the series. While everyone likes to settle their disputes using weapons and fists, the Florist’s biggest tools are his information and his mind.

Still, it doesn’t mean he isn’t prone to wandering around shirtless, just like every other Yakuza character.

While the majority of the Mushroom Kingdom seems to favour the thiccer lad, Wario stands out from the crowd as a particularly big boi, though if we want to do a bit of Game Theory, that’s by design. In his Smash Bros. move-set, he is freely able to change his size at whim, and yet he chooses to be a big boy. Proof that bigger is always better, at least in terms of waistline anyway.

Get your mind out of the gutter.

Often considered to be Mario’s rival, Wario is quite typically featured as masculine character, riding bikes and farting everywhere. That’s masculine, right? Either way, it’s a stark contrast from the lanky Waluigi, who is perhaps the most flamboyant character in Mario history. Together, the two make a brilliant double act.

Gaming’s most notable picture of “functional strength” is the Heavy, who unofficially considered to be the mascot of Team Fortress 2. While other characters like the Scout or the Sniper favour a more athletic build, the Heavy is built like a brick poohouse made out of brick poohouses. He’s muscular, but not in a ridiculous, WWE wrestler kind of way. Instead, he looks more like a World’s Strongest Man contender, which is to say he’s powerful.

Of course, the Heavy would have to be a strong yet thicc boy considering the fact that he carries his trusty minigun, Sasha, around with him. He has the most health of all characters in the game, and has one of the highest damage outputs, but his speed makes him vulnerable when moving across open ground.

The one problem with being thicc is that it makes you a bigger target. 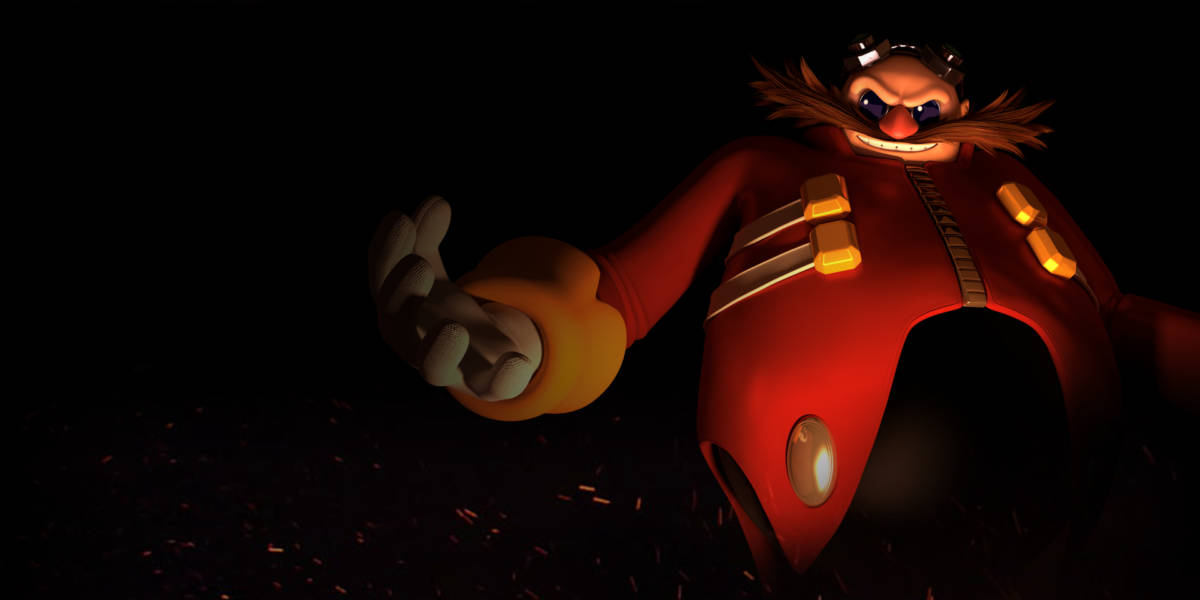 Perhaps a more creative name than Fatman, it can’t be denied that Eggman is the most accurate nickname in games. Seriously, the guy looks like a giant egg with two lanky legs sticking out of the bottom. At least he’s got the moustache so you won’t get worried when it falls off a wall and the King’s Men can’t put him back together.

A brilliant scientific mind that somehow is never able to actually beat Sonic, Eggman has been doing battle with the Blue Blur for decades now, and while he’s maintained his round frame throughout various iterations, his agility is not to be underestimated. Did you forget that moment in Sonic and Knuckles where he outruns Sonic? Because that happened. Even worse for Sonic, it’s not the only time.

I think Eggman needs to abandon world domination and move towards a career in track and field. 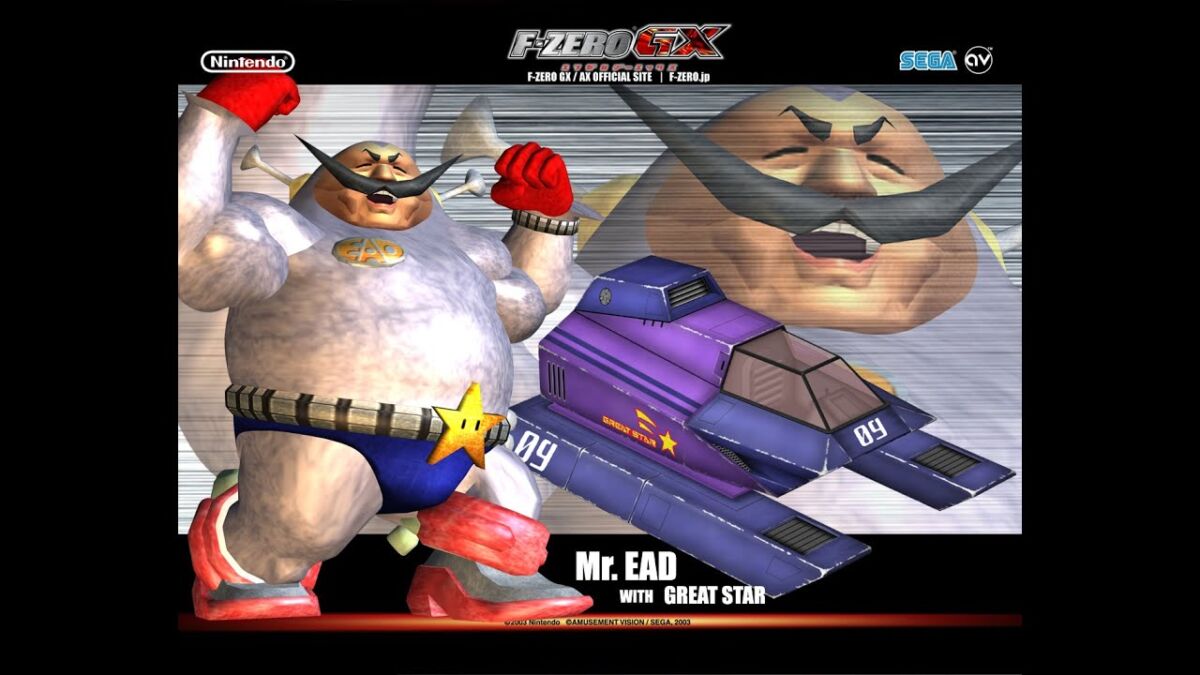 Can an android technically count as a thicc boi? This might be the most debatable entry on this list, but I’m willing to stand by it for two reasons: 1) someone created the Android to look a certain way, therefore they must think that bigger is perfect for performance, and 2) this whole list is all made up of silly bollocks anyway.

Mr EAD, an android competing in the F-Zero series, was created by the mysterious company EAD, and looks like a weird mix between Mario and an early 1900’s strongman. I’d say it was also a functionally strong argument, but does that hold water if you’re an android?

Either way, Mr EAD is a welcome change of pace from F-Zero’s regular parade of meatheads and weirdos.

Finally, an honest-to-goodness dad bod, and I don’t just mean in the aesthetic sense.

Brian is an actual dad, and he has the body to match, and in a game like Dream Daddy, which is filled to the brim with handsome and athletic looking dudes, Brian’s larger frame feels like a breath of fresh air.

Unfortunately, he’s not exactly the best Dad in the game, as that would be either Matt or Robert. Don’t @ me. Brian is a bit over competitive, with one of your first interactions with him being a competition over who can brag about their child more, but Brian’s a good hearted dad who just wants the best for his kid. He’s also got a beautiful dad bod, so he’s alright in our book. 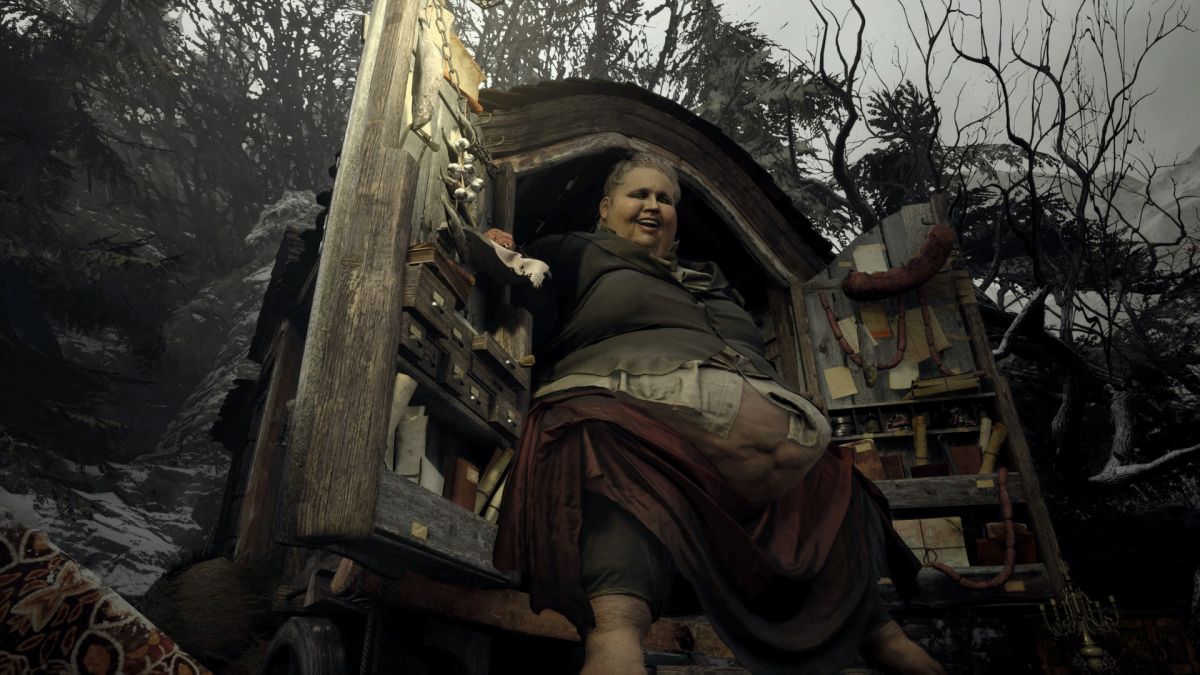 Resident Evil Village caused somewhat of a stir when The Duke was first revealed. An almost goliath of a man carried around in a carriage throughout Ethan’s journey, The Duke’s one key personality trait at first glance appeared to be that he’s a fat lad. Nothing more beyond that. However, while he’s certainly a profit-driven glutton, he remains Ethan’s biggest ally throughout the journey.

The Duke’s main motivation is clearly money, as evidenced by the fact that he’s willing to sell to anyone, including the villainous lords that preside over the village where Resident Evil 8 takes place. However, he also goes above and beyond to help Ethan on his quest, supplying him with information and even ensuring he reaches the last fight in one piece, no payment required. He’s a complicated and mysterious fellow, and I hope we see more of him.