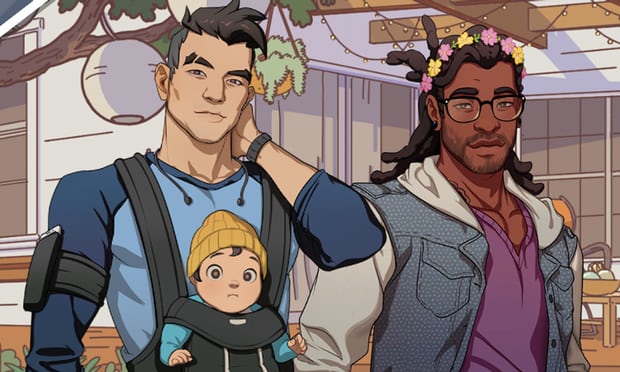 The popularity surge of dating sims has somewhat died down recently, although some might argue it’s still as strong as ever, with ridiculous games like Hatoful Boyfriend and Uta no Horse-sama still alive and well, along with more normal efforts like Mystic Messenger constantly getting content updates. However, the gay dating sim scene has never been very full, so getting a new game is a pleasant addition. Surprisingly developed by the Game Grumps, Dream Daddy lets you play as a dad who’s single and may or may not be ready to mingle, depending on how social and outgoing you want him to be as a person.

The place (or rather, the platform) where you choose which dad you want to spend time with is called Dadbook, and after a set of questions with oddly specific and accurate answers, you can get ready to throw all those questions away, because it doesn’t automatically match you with anyone. Instead, you can feel free to send a message to the hot dad of your choosing, no matter which one of the seven he is, and no matter how compatible he would be with your answers.

Before you get to Dadbook, before you can get your dating game on, you have to choose what you look like, and then promptly move out of your old house, to get into your new house, in your new neighbourhood that’s way too perfect with new neighbours that are way too hot. Except Brian. Brian can bugger off. Not even because he’s fat, but because he has to one-up you every time, and the first time you meet him he hits you in the head with a frisbee. First impressions count, guys. 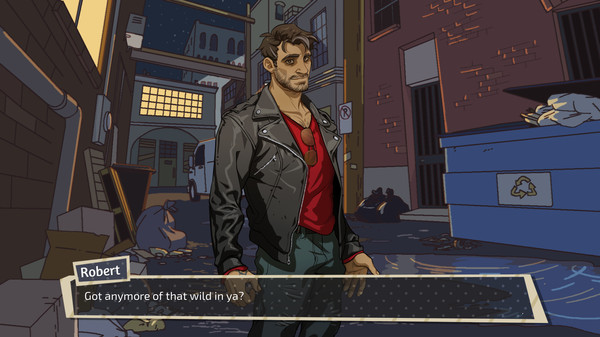 After that, it’s time to meet Joseph, who manages to save the most awkward conversation of all time, Craig, your old bro who used to be the bro-est college dude ever but is now fitter than you ever think you’ll be, Mat, the local barista at the world’s coolest and most hipster coffee shop, Damien, the cute goth guy and Hugo, your daughter’s teacher. A day or two later, you meet them all again at the local grill party, because somehow all of these hot, somewhat-available dads live in the exact same cul-de-sac. Even Robert, the badass dad who you’ll only properly be introduced to after the party as long as you don’t sleep with him at the first chance you get. He’s complicated that way.

After the grill party, you get on Dadbook, and have the chance to go on a plethora of dates, with absolutely no consequences until the third date, which is like locking in your choice in Who Wants to be a Millionaire, except for the fact that you can go back to the last Dadbook save file and choose a different route at any time. I recommend doing one route at a time, so you can get fully emotionally invested, leaving you even sadder if they end up wanting to be just friends. Or, depending on how well the dates go, you might end up getting a pin-up photo of your date.

A good thing about the characters is that they’re not just 2D character archetypes. Well, they are 2D, just like the game, but their personalities aren’t. Each of the dads has a hidden side that they only show you when they really trust you, which are often still better plot twists than most mainstream movies nowadays. The dads are lovable people, who are usually in it for more than just sex. Except Robert if you sleep with him on the first night. Seriously, don’t do it. You’ll lock his proper route and he’ll show up to your party giving you the cold shoulder. He may be the bad dad, but he’s not really a bad dad. Obviously, there are other exceptions, too, but they don’t involve messing up the first chance you get. 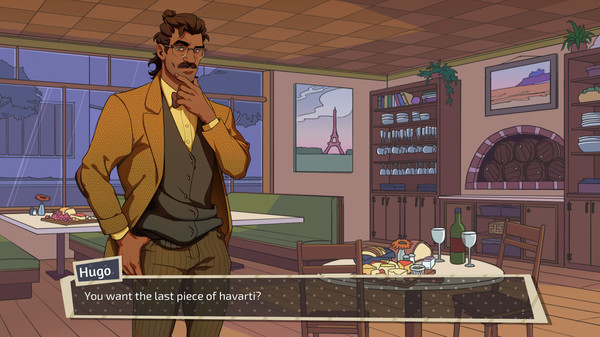 Each of the dads is a unique character with their own story, and so the dating experiences are completely different with each dad. The music isn’t too bad, although it can get quite repetitive. There’s not much voice-acting apart from the typical “huh”, “eh?”, “what?!”, “cool”, and occasional grunting you have in every dating sim. However, this benefits the game, because forcing a full voice-over onto the dads might make the whole point of a dating simulator null and void.

The dialogue in Dream Daddy is, for the most part, very lifelike, but occasionally there are one or two things people who are almost strangers say to each other even though they sound like things close friends would say. For the most part, your choices don’t really matter, unless you’re trying to get the best possible date to score the pin-up. Although there is an achievement for being the “world’s okayest dad” to Amanda, no one actually has managed to get it. Either because it physically pains everyone to be mean to Amanda, who is the purest, funniest daughter I have ever seen (not to mention she’s so in sync with you), or because it requires some obscure path with obscure answers.

Dream Daddy is one of the funniest games of recent memory, but sadly also very short. In fact, it would not have hurt the game at all to be a bit longer, where you have to really commit to one of the dads to move from friends to more than that, because in Dream Daddy, everything and everyone moves to quick. You go on three dates and suddenly your daughter is going to college and the credits are rolling. The game is still a load of fun, with special minigames that occasionally make you want to scream in frustration, or just scream because you’re forced to sing ska.

Verdict
Although it's much too short, Dream Daddy is a fun game with lovable characters. Some of the minigames can be annoying, which away from the whole experience. The main thing Dream Daddy needs, however, is to be longer, so that you have more time to bond with the dad of your choosing.
8
Cultured Vultures is a pop culture website established in 2013 covering all things gaming, movies, and more. We eat your words.
All The News On The Biggest Games