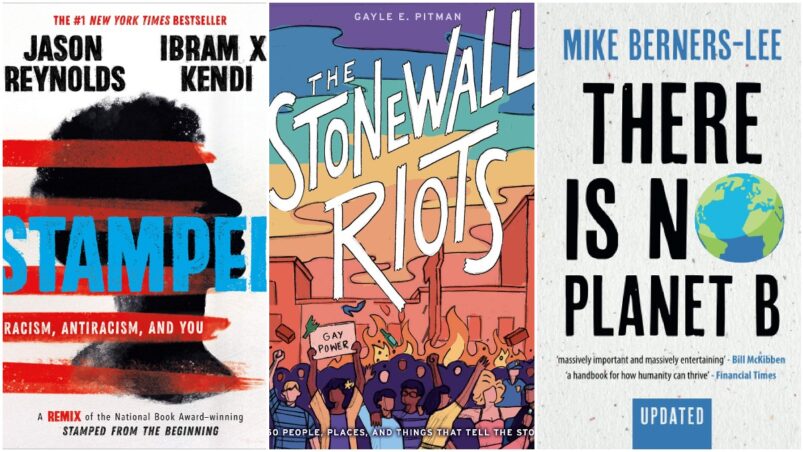 The best non-fiction books for teens need to primarily do three things; they should be relevant, interesting, and relatable. Non-fiction can sometimes seem like an uphill slog, too much like a school textbook to really be enjoyable, and so the best examples of the genre should do all of the three things mentioned above. With those in mind, the best non-fiction books for teens list could be extensive, but these ten examples really show off what such books can do.

The Best Non-Fiction Books For Teens

1. The Boy Who Harnessed The Wind – William Kamkwamba and Bryan Mealer

The Boy Who Harnessed The Wind is an inspirational tale of one boy who was determined to educate himself no matter what – and the things that he achieved by stubbornly pursuing learning even in the darkest of times.

William Kamkwamba was 14, living in Malawi during the severe famine of the early 2000s. His family could no longer afford school fees, so William borrowed books from the local library and one day learned about energy. He decided to build a windmill, made from nothing more than scraps, and changed his own life as well as those of his family, and then people in his community. William’s story is touching but honest, and a great read for teens.

It seems like a no-brainer that The Diary Of Anne Frank should be on a list of the best non-fiction for teens. It is, after all, one of those books that absolutely everyone has heard of and certainly one that everyone should read. Many kids read it in school, but those who don’t should be encouraged to pick it up too.

The book hardly needs introducing. Anne Frank was a young Jewish teenager forced into hiding with her family in Amsterdam during the Second World War. Whilst there, hiding for two years in a cramped attic, Anne kept a diary, confiding her deepest thoughts, feelings and anxieties, before the family was discovered and taken to concentration camps. Anne died, aged 15, in the camp – but her diary brings her to vivid life, and serves as a reminder of a time that every generation should learn about.

3. Flowers in the Gutter: The True Story of The Edelweiss Pirates, Teenagers Who Resisted The Nazis – K. R. Gaddy

Flowers In The Gutter is one of the newer titles on this list, but it tells such an interesting and little known story that it had to find a place on the list of the best non-fiction books for teens. As the title suggests, the book is about a group of teenagers who fought against the Nazis in the Second World War, and their story is inspiring in its heroism and optimism.

The Edelweiss Pirates were a movement of teenagers who had grown up in a Germany controlled by the Nazis – teenagers who disagreed fundamentally with the stance that the government took, objecting to the stranglehold it had on the country. The teenagers were responsible for anti-Nazi graffiti and anti-war leaflets, and as the time went on, they engaged in sabotage and armed resistance. Always being hunted by the Gestapo, the desperate bravery of these teenagers is really something to behold.

4. I Am Malala: The Girl Who Stood Up For Education And Was Shot By The Taliban – Malala Yousafzai with Christina Lamb

Like Anne Frank, many teens will have heard of Malala Yousafzai, and quite rightly so. As far as modern young role models go, Malala is right up there, perhaps only eclipsed by Greta Thunberg in recent years. Malala’s story, of how she almost died at the hands of the Taliban aged 15 after campaigning for female education, is well known.

This book though goes into detail that is missing from the bigger picture, starting with her story before the Taliban, and her life in Pakistan. Raised by socially conscious parents, Malala became an outspoken activist for education when the Taliban rose to power and began to shut down schools. Malala wants to be known for her fight for education rather than as the girl who was shot by the Taliban, and this book is part of that; the story is fascinating, and well worth the time any teen takes to read it.

Dawson is a safe pair of hands when it comes to writing for teens; she’s funny and honest, with no talking down and no patronising. In Mind Your Head, there is a conversation about all kinds of mental health topics, from anxiety and depression to self-harm, personality disorders, eating disorders and addiction. Never once is the book anything except supportive and honest about how hard it can be to deal with such issues, but there’s always the underlying message that there are ways to manage, and people who can help. For a lot of teens, such reassurance is not something that they get every day.

Dr. Ibram X. Kendi is a heavyweight voice in the fight against racism and the exposing of the racist fabric of the United States of America, and his book Stamped From The Beginning charted the lives of five American intellectuals and how racist ideas have been challenged or entrenched.

In Stamped: Racism, Antiracism and You, Kendi teams up with the award-winning author Jason Reynolds, a safe pair of hands when it comes to writing for teens, and adapts his book for younger readers. Published in 2020, and becoming more relevant in that year than perhaps the writers ever imagined, the book takes Kendi’s original text and remixes it into an accessible and pacy book, full of ways in which young people can combat racism in their daily lives.

7. The Stonewall Riots: Coming Out in the Streets – Gayle E. Pitman

No modern list of the best non-fiction books for teens can be complete without a book like The Stonewall Riots. Where best to start teaching young people about queer history than with the most famous event of all, the riots that were the birth of the Pride movement in 1960s New York.

Pitman’s book is an illustrated guide to the history of the LGBT community in America, starting in the 1800s and tracing the story all the way through to Stonewall and beyond. Pitman uses historical objects, such as posters, banners and articles, to anchor the history and give teens a real sense of the progression of time and the movement within it.

8. There Is No Planet B: A Handbook for the Make or Break Years – Mike Berners Lee

Just as with The Stonewall Riots, there must be a place on the list of the best non-fiction books for teens for a volume about the climate crisis, the most pressing issue of our time and surely what will be the most pressing issue for teens moving forwards. The original There Is No Planet B was published in 2019, but there is an updated version from 2021, showing how quickly the subject is progressing and how much more there is to know.

Berners-Lee addresses a lot of environmental questions – should we be vegetarian? Should we fly planes anymore? Should we go nuclear? – and gives readers a bigger picture perspective of the whole crisis and what we can do about it, as individuals. He doesn’t claim to have all the answers, but he does have sensible advice and a healthy dash of hope and optimism – exactly the sort of thing young readers might need in the face of this terrifying problem.

9. We Should All Be Feminists – Chimamanda Ngozi Adichie

We Should All Be Feminists is the little essay that was the brainchild of bestselling author Adiche, a little essay that took the world by storm when she presented it as a Tedx talk. That talk is available on YouTube, and a perfectly good way of accessing her wisdom. But the book, small and mighty, is also something that should be on every bookshelf.

Adiche’s feminism is about awareness and inclusion, giving space to everyone in the conversation about feminism and what it means in the twenty-first century. She’s frank and honest and shares her own experiences with no qualms at all, making her wisdom feel more accessible and rooted in the truth of everyday difficulties.

There is always space for a fun, slightly absurd book on a list like this, and Randall Munroe – creator of the frankly excellent xkcd webcomic – provides such a book with What If?. The book is a selection of questions sent to Munroe from readers of his comic, and the answers that he published on his blog, as well as some saved especially for the book.

Munroe really does have a great sense of humour, and it shines through as he answers questions such as ‘what would happen if you tried to hit a baseball pitched at 90% of the speed of light?’ and ‘how fast can you hit a speed bump whilst driving, and live?’. Teens will love Munroe’s absolute commitment to the problem, no matter how absurd, and how effortlessly funny his answers are – and the comics going with the answers are great too.