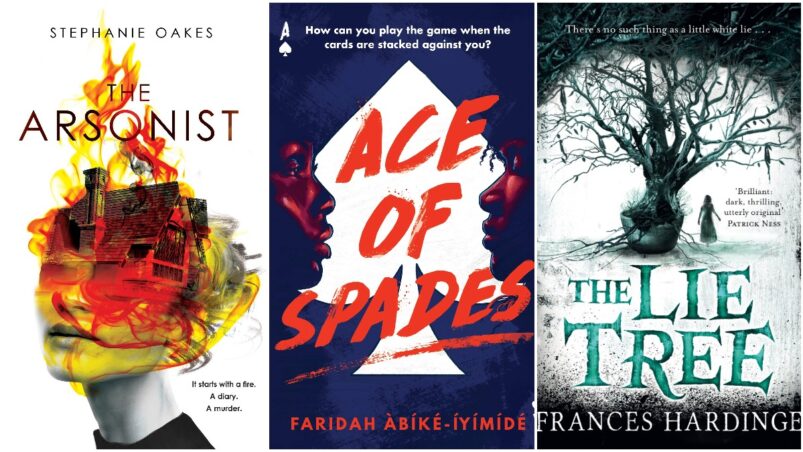 Choosing the best mystery books for teens is no easy task; the genre is not the most popular when it comes to young adult fiction, but of the many that do exist, there are just so many that are really, really great. And, unlike some other genres, there’s a fine pedigree of classic stories that teens can enjoy too, a couple of which have made it onto this list. The best mystery books for teens list spans centuries – not just decades.

The Best Mystery Books For Teens

Ace of Spades is the newest entry on this list, but it has been making big waves in the YA book world, so it just had to be included here. This is Àbíké-Íyímídé’s debut novel, and Ace of Spades is so good that people are already excited to see what she produces next.

At Niveus Private Academy, the anonymous Ace is set on revealing dark secrets, and they have two students in the firing line. Devon is a musician and Chiamaka the head girl, and both of them have things they’d rather not share with the student body. There is a twist in Ace of Spades that is bound to get teens talking.

The Arsonist is a very strange book, dividing readers almost straight down the middle as to whether they actually enjoyed it or not. But the people who love it really, really love it – and it is one of the best mystery books for teens who are confident readers who enjoy complex stories.

Molly is a teenage girl with a dad on death row. Pepper is an epileptic Kuwaiti immigrant about to flunk school. Molly gets a mysterious package that brings the two of them together, and they end up trying to solve the mystery around the murder of Ava Dreymon, an East German resistance fighter who died in 1989. The Arsonist is a headscratcher, and all the better for it.

Anthony Horowitz, of Alex Rider fame, began his The Diamond Brothers series way back in the 80s, long before Alex Rider was a glimmer in his eye. In general, The Diamond Brothers books – about the world’s worst private detective – are aimed at a younger audience, but there will be less confident teenage readers for whom these are just perfect.

In The Falcon’s Malteser, detective Tim Diamond and his younger brother Nick are charged with looking after a mysterious parcel. When they try to investigate the parcel, they’re arrested and questioned – and so begins a shenanigan filled plot worthy of any 1940s hard-boiled detective film. Horowitz is a funny writer, and reluctant readers will find his prose a breeze to get through.

High-Rise Mystery is another book perfect for younger teens, or for less confident readers. Jackson is funny, keeps her story fast-paced and snappy, and the plot is whip-smart. High-Rise Mystery comes from Knights Of, that brilliant new publishing company focused on diverse stories, so you know it’s going to be great in that respect too.

Sister Nik and Norva find their community art teacher murdered on their estate, and immediately set to solving the crime. Even before the police turn up, they are listing suspects and looking for people with the means. The evidence takes them in a direction they’d rather not think about, but the sisters are detectives to the core and determined to get to the bottom of things.

Holes is a modern classic when it comes to YA novels, and certainly one of the best mystery books for teens out there. So many teens read it in school that it has become a bit of an institution, but for any who somehow missed out on this seminal experience, the book is there ready and waiting to be enjoyed.

Stanley Yelnat is sent to Camp Green Lake Juvenile Detention Centre after a miscarriage of justice. Every day, he and his inmate friends have to dig a hole and report whatever they find. The warden says it is good for them, but Stanley is going to get to the truth. Holes is a very unique book, infinitely memorable, and one that all teens should check out when they can.

6. The Hound Of The Baskervilles – Arthur Conan Doyle

And now for something completely different. Sherlock Holmes is, of course, an icon. The literary detective. It would be completely remiss not to include him on a list of the best mystery books for teens. The Hound of The Baskervilles is a classic, but it isn’t even that tricky to navigate; Conan Doyle writes fairly simply.

The Hound of The Baskervilles is the third Sherlock Holmes novel, but probably the most famous and almost certainly the best. Holmes and Watson are on Dartmoor, trying to solve the mystery of a legend about a terrifying, supernatural dog and the attempted murder that drew them to the moor. The Hound Of The Baskervilles is just scary enough that teens will be shaken by the story, but not so scary that its too much.

The Lie Tree, from YA author extraordinaire Hardinge, is a historical mystery that is sure to keep more confident teenage readers on the edge of their seats. Hardinge is a master of tone and scene-setting; reading parts of this novel alone at night is likely to be a little bit scary, actually. She sets a remarkably creepy scene.

Faith Sunderly and her family have suddenly left England to live on Vane Island, where her father, the Reverend Erasmus, can dig for fossils to add to his collection. Faith has a feeling that there is more to the story than just fossils, and as her parents manage to upset many island dwellers in a short time, her feeling of dread only gets worse. When Faith discovers the true reason for their move to the island – and her father turns up dead – she knows she has to untangle the mystery for herself.

The London Eye Mystery is one more book on this list that is perfect for less confident teen readers, or those who just want an easier thriller of a novel to whip through. And they will read this quickly, for sure; Dowd knows precisely how to keep her young readers on the edge of their seats and keep them turning the pages.

Ted and Kat watch their cousin Salim get on the London Eye, but when his pod returns to ground half an hour later, Salim isn’t there. How could he have disappeared into thin air? Ted and Kat don’t always get along, but they manage to work together well enough to follow the clues across London as they search for Salim.

There is room for one more classic on this list of the best mystery books for teens, and just as no list is complete with Arthur Conan Doyle, it obviously also needs Agatha Christie. A lot of young readers who get into mystery novels really whip through Christie’s work; she is always entertaining, and her mysteries are always just fiendish enough that the answer is out of reach.

The Mysterious Affair At Styles is just as good a place as any to start with her work. It’s the very first Hercule Poirot novel and not as complicated as some of the later work tends to be, so it is a great introduction to Christie’s work. An elderly woman is found poisoned in her manor home, and Poirot is invited to help solve the mystery. All the key components of Poirot novels are introduced here, and young mystery fans are going to undoubtedly love them.

Shadowshaper is an urban fantasy novel, short and sharp, and bound to intrigue. Whilst not a straight up mystery story like many on this list, it has elements of mystery in it and could be the perfect compromise for teens who aren’t sure they like mysteries.

Sierra Santiago is looking forwards to summer until a zombie-type turns up at the first party of the year. Then her very sick grandfather starts saying he’s sorry over and over. Then the graffiti starts to weep, and Sierra realises something very odd is going on. Sierra falls into a story that involves shadowshaper spirits, magic being used for nefarious purposes and an evil big bad intent on wiping out Sierra herself.

11. A Study In Charlotte – Brittany Cavallaro

Sherlock Holmes is ripe for re-imaginings, and A Study In Charlotte is one such reinvention. Set in modern day Connecticut, the great-great-great-granddaughter of Holmes himself has inherited the genius of her ancestor but also his quick temper. Jamie Watson, descendant of Holmes, is not thrilled to end up at the same school as Charlotte.

But then there is a mysterious death, and the pair of them are being framed for murder. Jamie and Charlotte are forced to deal with the tense energy of their almost-rivals relationship and come together to try to clear their names. Fans of Sherlock Holmes raved about this book when it first came out, and teens will love the reinvention of the classic tale.

We Were Liars has been massive on the book side of TikTok, a novel that young people can’t stop talking about despite it being over seven years old now. The book is more of a psychological thriller than a straight up mystery, but just like Shadowshaper, it might be just the thing to introduce teens to the genre.

We Were Liars is about mistakes, and dealing with the consequences of them. The seemingly perfect Sinclair family spends their summers on their private island. The older cousins are known as The Liars, and in the fifteenth summer, Cadence suffers a serious head injury that leaves her addicted to pain meds. When she finally returns to the island in the seventeenth summer, things are not the same – and she is determined to find out why.

READ NEXT: The Best Dystopian Books For Teens