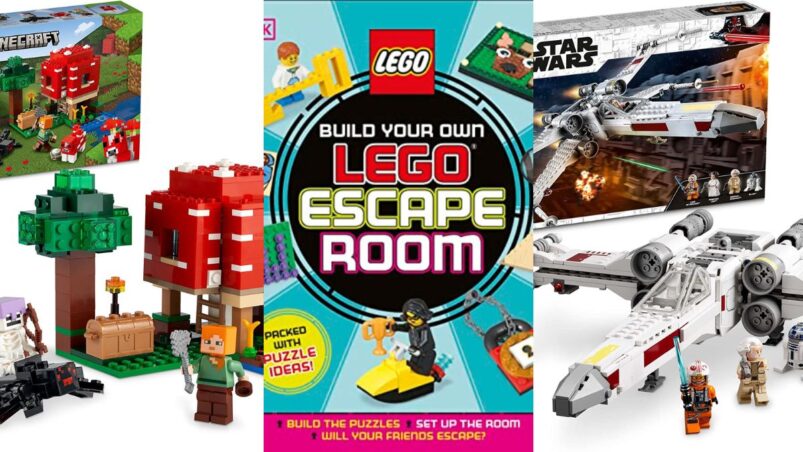 The world of LEGO can be built with bricks or games, offering tons for both master builders and newcomers alike. With the holiday season just around the corner, everyone wants to sit down and either play or build something cool. LEGO has made games and playsets of all kinds and for all ages, with the best LEGO gifts ranging from all across pop culture’s biggest properties and even some unique spins on the LEGO pieces themselves.

Shopping for a LEGO fan? Or want something that’s a bit outside of the box? Here are the best LEGO gifts for the 2022 holiday season.

Just in time for the Guardians of the Galaxy Holiday Special, this Marvel advent calendar is an experience that lasts an entire month.

Each day, a small window can be opened to reveal a minifigure, a build or something that compliments other days and their gifts, which range from a snowman with Thanos’ armor to Nebula wearing a cozy sweater.

If you’re planning to gift someone who grew up with the PS2, chances are they have played a LEGO game before, especially the classic Star Wars ones.

The Skywalker Saga has all 9 episodes of the Star Wars franchise playable and revamped in a brand new game — a perfect gift for both newcomers and experts. The PlayStation 4 version is also compatible with the PlayStation 5, and we have more Star Wars gift ideas if you need them.

Drink some hot cocoa out of a gigantic mug designed after the actual LEGO mug piece with this novelty present. Made from plastic, people from all ages can enjoy this gift and get a laugh out of it.

For the dinosaur expert in your life, this 3-in-1 LEGO set includes different designs for the pieces included, letting imagination run wild. It can be a nice desk decoration or a kid’s favorite toy.

Standing at a whopping 15 inches tall (38cm), the Tallneck is a massive part of the Horizon Zero Dawn games. The set includes an Aloy minifigure and a flowered display base for the beast, making it a perfect gift for any fan of the franchise, or a collector with plenty of space.

With the release of Black Panther: Wakanda Forever, any Marvel fan with a passion for the world of Wakanda would love a display piece like this — even kids, as it gives a hero and a villain to make a nice battle.

Potterheads are everywhere, and whatever house they might be (even if they’re Slytherin), this set includes all the franchise’s basics — plus an exclusive 20th anniversary Hermione figure for a collector’s touch.

Is there anything better than a box of bricks? Anything can be built, from giant frosted donuts to a cool painting to hang on the wall. This LEGO gift is recommended for all ages with some inspiration for builds included inside.

For those with a shelf filled with 200 sneakers, this recreation of the Adidas Superstar shoe is one of the best LEGO gifts to please a sneakerhead. Maybe warn them to not try and wear it as an actual shoe, though.

10. Build Your Own LEGO Escape Room

A perfect gift for the brain in the family, with 49 LEGO bricks already included, the Build Your Own LEGO Escape Room book includes tons of ideas and decorations to make some real puzzles.

James Cameron’s franchise has spawned tons of toys, with LEGO sets being one of them. For those excited for the release of Avatar: The Way of Water (and its 3 sequels), this is one of the best LEGO sets that act as gifting a slice of the ocean.

The Bonsai Tree is a great gift for patient builders. Made for LEGO’s adults-only line, this set turns pink frogs into leaves in one of the most unique building experiences from the brand. If you’re shopping for a more “zen” family member, this is a decent pick.

Copenhagen’s line of LEGO things for the house is topped with a simple water bottle, fit for any age and occasion. Water-tight and leak-proof to prevent any accidents while building or doing anything else, this is a robust gift for daily use.

A perfect gift for fans of penguins overall, or someone looking for a quick and pretty LEGO set to build in the cozy holiday nights. It might not be as cool as adopting a real penguin, but at least you actually get to see this one.

For those who can name every member of the group from Friends, this 1000+ piece recreation of the iconic Central Perk café is a great display piece filled with references to the show’s long run, with figures of every main character.

Every DC fan knows Batman and The Joker, but not many have seen the colorful versions from the 60s TV show. This gift is perfect for collectors who are fans of the DC world, but also anyone looking for a cool car with a hero and villain.

Everyone wants to spin a spaceship around without it breaking, and LEGO has a variety of sets that have a stronger build just for that. With figures included, this is a great gift for space enthusiasts and young kids with an eye for the stars.

From hanging coats to bags to maybe even more LEGO itself, these themed wall hangers are one of the best LEGO gifts for a fan of the brand, or someone who likes creative ways to decorate their house.

With all these LEGO bricks, there has to be a themed bag to put them on. Fitting for the theme and a size that fits all closets, these storage organizers are a clever gift for anyone in need of some order in their life.

The Muppets are a big staple on television in the entire world, and these collectible minifigure bags have one random member of the popular crew. Chances are Kermit the Frog will pay the chosen bag a visit, with this gift being great for any age.

LEGO can sometimes be an expensive hobby, but this kids’ wallet can definitely help keep track of the costs. With a stylish cover featuring multiple minifigures, this is one of the best LEGO gifts for any fan of the brand.

Minecraft is one of the biggest games of all time, with players of all ages and types. The Mushroom House replicates the same feeling from building your own cozy home in the game, with figures and multiple accessories included — a perfect gift for a young or experienced player.

Geared for the experienced collector, maybe even an art connoisseur, this recreation of Van Gogh’s Starry Night comes with more than 2000 pieces, and a figure of the painter himself. Every stroke is recreated with the edges of LEGO as fluidly as possible to make a beautiful display piece, with a unique building experience perfect for the holiday season.

An iconic car from the 007 movies, featured across different versions of the character and his franchise, the Aston Martin set comes with the classy car that can also act like a drifting toy with a cool tuxedo figure.

Last but not least, one of the biggest staples of the Star Wars franchise is Luke Skywalker’s iconic X-Wing, having been featured in several movies. This is a great starter place for a brand new collection, or just as an individual display piece for a fan of the galactic hero.