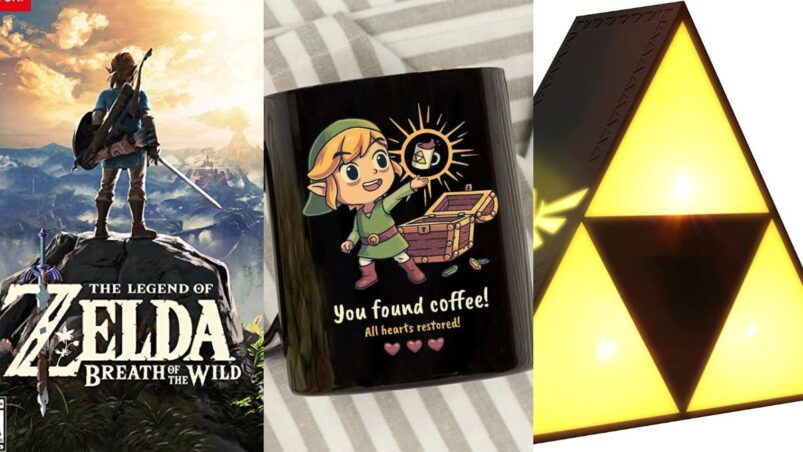 Hey! Listen! If you’re searching for the best Zelda gifts around, we can help.

The Legend of Zelda franchise is nearly four decades old, with the OG Zelda game being released back in 1986. It has amassed a fandom that spans generations, and it continues to grow along with the anticipation for Breath of the Wild’s sequel.

With so many Zelda-related gifts out there, it’s dangerous to go alone, so take our list of the best Zelda gifts with you. You’ll find options that fit any budget, so you don’t have to worry about how many rupees you’ve saved.

1. Ocarina and Book of Songs

You might not have realized that an ocarina is an actual instrument that you can learn to play in real life. There are many versions of the iconic musical instrument available, but this one looks just like the Ocarina of Time.

Not only does it look like it popped straight out of a Zelda game, but it also comes with a book of songs for you to learn as you master the instrument, from iconic Zelda melodies like the “Requiem of Spirit” to basic tunes like “Twinkle, Twinkle Little Star”.

2. The Legend of Zelda Jigsaw Puzzle

Puzzles make great gifts for anyone who loves a challenge, and fans of The Legend of Zelda are especially well-versed in solving complex challenges, as anyone who’s spent hours running through the Water Temple in Ocarina of Time knows.

Fear not though, because this 1,000-piece Zelda puzzle will be a welcomed break from those repetitive temple runs. The puzzle features a detailed map of Hyrule which includes many notable locations from several classic The Legend of Zelda games.

No Hylian warrior is complete without an iconic Hylian shield. This collector’s edition is a replica of the Hylian shield from Breath of the Wild.

The 12-inch statue is made of beautifully painted PVC and attaches magnetically to a display stand. The gold rivets contain LEDs that light up to give your Hylian shield a majestic glow.

The melodies from The Legend of Zelda are timeless and filled with nostalgia. This compact music box makes an excellent gift for any Zelda fan, especially those fond of Ocarina of Time.

This intricately decorated box plays the “Song of Storms”. It has a small compartment to store a tiny trinket in and features either gold or silver components.

Listen! Any Zelda fan would be happy to have a fairy companion to accompany them on their everyday quests. Navi is an iconic part of the Zelda experience, quirky advice and all, and she makes a great small gift.

This adorable Navi keychain glows in the dark, which really brings the pendant to life. You can also opt to get it as a necklace.

The Triforce of power, wisdom, and courage is one of the most well-known symbols from The Legend of Zelda. This bright Triforce lamp, so that any fan can light their way to Zelda.

This officially licensed Nintendo product projects the Hyrule logo onto nearby surfaces when in use. It can be powered by a USB connection or AAA batteries and makes a great gift for kids and adults alike.

Anyone who loves Zelda has undoubtedly aided Link as he defeated Majora’s Mask. Now that Hyrule is saved from that powerful artifact, why not get a less destructive one for yourself?

This full-size replica of Majora’s Mask is made with a polyurethane resin and is hand-painted with stunning attention to detail. The horns of the mask are attached via strong magnets and can be rotated or removed.

Sometimes even Link has to throw on a cute outfit and some makeup to complete his quest. While you may not be infiltrating Gerudo Town, these makeup brushes are sure to make your cosmetic routine more fun.

Each brush in this 5-piece set is inspired by a weapon from different Zelda games, including Ocarina of Time and Majora’s Mask. It’s dangerous to go alone, so take these along with you.

If the Zelda fan in your life thinks they know everything about the fandom or wants to, this Hyrule Hystoria book set is perfect. This set comes with the Hyrule Historia, an encyclopedia, and a book on arts and artifacts from The Legend of Zelda.

The Hyrule Historia contains a wealth of historical information surrounding Hyrule and The Legend of Zelda. The encyclopedia is an exhaustive guide to the games, and the book on arts and artifacts provides an in-depth look at the franchise’s art concepts.

Nintendo is the birthplace of The Legend of Zelda franchise so it makes sense to let the Zelda fanatic you know deck out their beloved Switch in Zelda accessories.

The durable Nintendo Switch case features a Sheikah Slate design and has space for the system, its games, and the charging cord. There’s also this fantastic Joy-Con display with a Skyward Sword-themed design that can be wall-mounted or set on a shelf.

11. The Legend of Zelda Pendant Set

This Zelda pendant set is basically a collector’s dream. All of the artifacts included are tiny replicas of cherished in-game items from multiple different Zelda games.

The set comes in a sturdy wooden box and includes pendants that resemble the Hylian shield, the Master Sword, and more. It even includes a necklace chain in case you want to carry your favorite pendant around with you.

Hya! No list is complete without a themed coffee mug. This Zelda-themed mug is perfect for any fan of The Legend of Zelda that you might know.

The design features Link discovering some delicious coffee and boasts that it restores all of your hearts. The mug comes in two sizes, 11 oz and 15 oz, and two colors, white and black. It’s made from high-quality ceramic and, best of all, is dishwasher-safe.

This small handheld gaming device carries a ton of nostalgia along with it and makes a great gift for Zelda fans. This Zelda version of the Game & Watch comes already loaded with The Legend of Zelda, The Adventure of Link, and Link’s Awakening.

The design features green details in a nod to the franchise’s signature color. This awesome collectible also features a game mode called Vermin and a clock that’s based on Zelda II.

14. The Legend of Zelda: Breath of the Wild

While there’s a high chance that your loved one already owns Breath of the Wild if they’re a big Zelda fan, no Switch collection is complete without it taking pride of place.

Widely believed to be one of the greatest open world games ever made, Breath of the Wild offers a ruined Hyrule for you explore after you wake up as Link, who previously failed to save the day. Time to make amends.

To finish out the list, we have this amazing Zelda box set that’ll make a wonderful gift for any fan of The Legend of Zelda. This set comes in a treasure chest that actually makes the “da na na naaaaa” sound when you open it.

Inside, you’ll find five graphic novels from The Legend of Zelda – Legendary Edition manga series, including volumes based on Ocarina of Time and The Phantom Hourglass.

READ NEXT: The Best Star Wars Gifts For Christmas