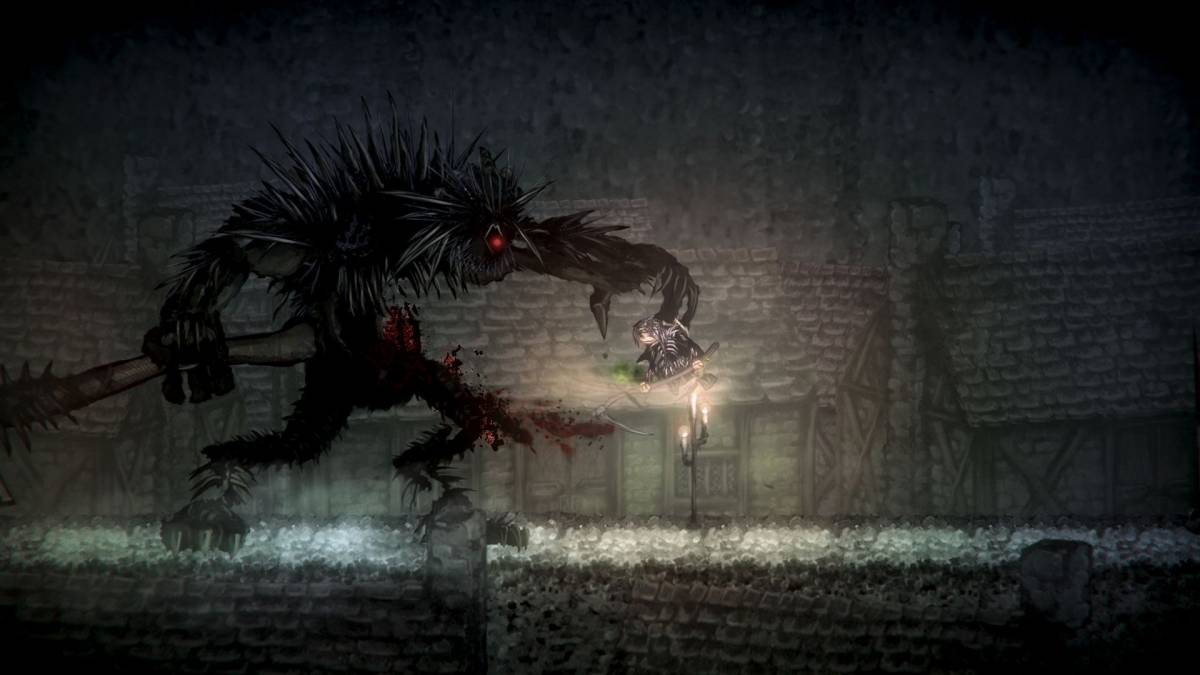 So, what do you get if you cross Dark Souls with a Metroidvania? A sunburnt penguin. No. Wait, what’s black and white and red all over? Salt & Sanctuary. Hang on a minute…

To say that Ska Studios – somewhat known for their underappreciated Dishwasher series – latest effort is anything other than the above would be an untruth. Apart from there are no sunburnt penguins. What there is, however, is exactly what you’d expect from an indie take on a Souls/ Metroidvania crossover that actually pretty much is, in fact, black and white and red all over; grandiose and interesting bosses at every turn, backtracking with newfound abilities that open up older areas for further exploration, and an ever-pervading sense of tension and danger that the next enemy you encounter might just finish you off and send you back to the last sanctuary you rested at, losing your salt in the process.

While the game really does borrow heavily from the Souls series – it features all of the tropes employed by From Software; the sparse narration, brutal combat, losing your currency and having to find it again upon the players death, overly obtuse methods of playing cooperatively, etc. – the shift of perspective into 2D side scrolling does a lot to make the experience its own, as well as the ways that Ska have expanded upon their source material.

The skill tree is quite unlike most action RPG’s, and is evocative of FFX’s Sphere Grid (Or Whatever That Was Called) in how you allocate points according to the ability you wish to improve, with each category branching out from a central point. After being initially overwhelmed by the sheer choice on offer, I quickly grew accustomed to how it let my character develop dynamically and specifically, which is something I feel that a lot of games in this genre can lack, and leave you feeling trapped and committed to what you thought your build was going to be near the beginning, as opposed to what it actually became nearer the end.

This freedom of choice is reflected in much of Salt & Sanctuary- following the overtly Lovecraftian introduction you are free to explore the world how you see fit. At least, until you come across an obstacle that requires an as-of-yet unobtained ability or key or some such. A lot of the game plays out like this, in typical Metroidvania fashion; remember this weird looking thing blocking the way, because probably, eventually, you will understand what it is and how to overcome it, so go back and look for another way around. Probably fight a giant boss in the meantime. You know the score.

The titular sanctuaries themselves adhere to the same philosophy of player agency and freedom; each are entirely customisable according to the player’s resources and needs when they are discovered, as well as provide the much needed respite in the constant risk-reward duality and tension that is always present as you explore deeper in to the world of Salt & Sanctuary.

At this juncture I’m reluctant to say much more about Salt & Sanctuary directly, being that a lot of the joy in games of this genre personally comes from the sense of scale, exploration and discovery. I will say though, that S&S has the above in spades, and all the while feels great while you play through the surprisingly long story, and I’m sure, again into NG+ and beyond. If you are unfamiliar with this game, and any of the above appeals to you, dive in headfirst before you read any further and you will enjoy this hidden gem all the more for it.

The fact that Ska Studios is comprised of a man-and-wife team alone is astonishing- the sheer amount of detail and obvious care they have put in to this title is otherworldly. Even the tense and exhilarating soundtrack was composed in-house. Hats off, seriously. Now, if you could just please make online co-op a thing then this would be a serious contender for my personal GOTY, a high accolade indeed [insert self-deprecating joke to appear less narcissistic and self-aggrandising here].