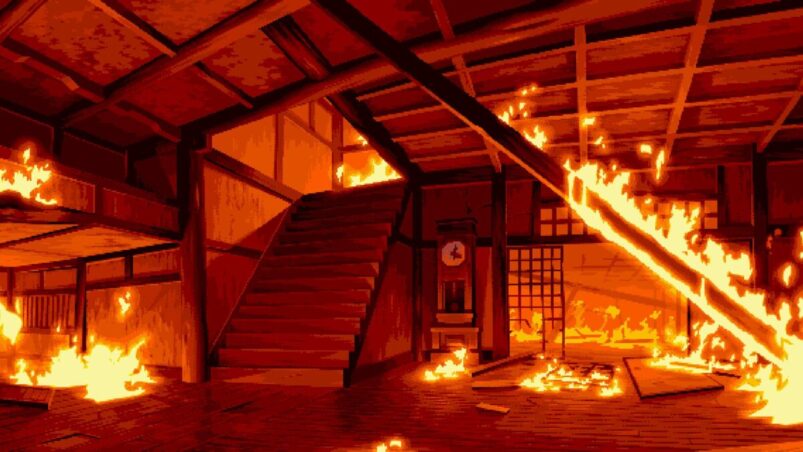 Welcome back to our less than regular celebration of some of the best stages in fighting game history. Today, we’re taking a trip back to Feudal Japan to talk about a scuffle in a raging inferno, as it’s the turn of The Last Blade 2’s Large Fire At Wadamoya stage.

The 90s and early 2000s saw a lot of fighting games come and go, and while some of the big names made it through the decade stronger than ever, like Street Fighter, Mortal Kombat and Tekken, some others fell by the wayside. Games like Bloody Roar, Fighting Vipers, Rivals Schools and more have been largely forgotten about, but that doesn’t mean they don’t have something worth remembering.

SNK were no exception to this rule. Games like King of Fighters or Samurai Shodown are fondly remembered and have been continued ever since, but Art of Fighting, Fatal Fury and Buriki One, among others, have either been left behind or absorbed into larger SNK titles. The KoF series compiles like five different fighting games into one at this point, while Samurai Shodown completely overtook SNK’s other Feudal Japan fighting game, The Last Blade.

The Last Blade series was similar to Samurai Shodown, in that it was a weapon based 2D fighting game with a fast pace, lots of defensive capabilities and a high damage output. The game came complete with two fighting modes, power and speed, that let players make the choice between raw damage output and fast combos. With a simple control system, The Last Blade combined ease of use with plenty of depth to create something excellent.

The sequel, The Last Blade 2, built on the foundations of the previous game by adding new characters and abilities, along with a hidden third fighting style called Ultimate, which offered the strengths of both fighting styles while sacrificing defensive moves. However, it also included an all-time classic of a fighting game stage background in the form of Large Fire At Wadamoya. From concept to execution, the Large Fire stage is simply flawless.

Perhaps the most basic name for a stage in fighting game history, Large Fire At Wadamoya is precisely that, but that simplicity is what makes the stage so compelling to play on. In essence, the stage is similar to Tekken 5’s Moonlit Wilderness stage, but on opposite sides of the spectrum. Moonlit Wilderness is such a joy to behold because of how isolated and picturesque it is, so two people fighting there adds more weight, like nothing else in the universe matters to these two characters.

Large Fire At Wadamoya obtains the same effect through alternative means. Instead of feeling isolated, the massive inferno gives the stage a sense of urgency, and yet here are these two skilled warriors who are willing to put their very lives on the line for the sake of this bout. Both of them might, and probably would die in the castle due to smoke inhalation at least, but clearly neither opponent would be able to rest without knowing who is superior.

It’s background work like this that gives fighting game bouts more gravitas and drama than stages that are just arenas, street corners or some kind of evil villain lab. Large Fire At Wadamoya is also aided by some impeccable sprite work, with the ongoing blaze seemingly feeling close enough to the fighters that they could slice through the embers with every strike.

While The Last Blade 2 isn’t as well known as other fighting games on the market, it deserves to be remembered among some of the best. Thanks to the ACA Neo Geo games, it’s even available on all good modern platforms too. Large Fire At Wadamoya alone makes revisiting The Last Blade 2 worth it, but the rest of the game also deserves your attention.