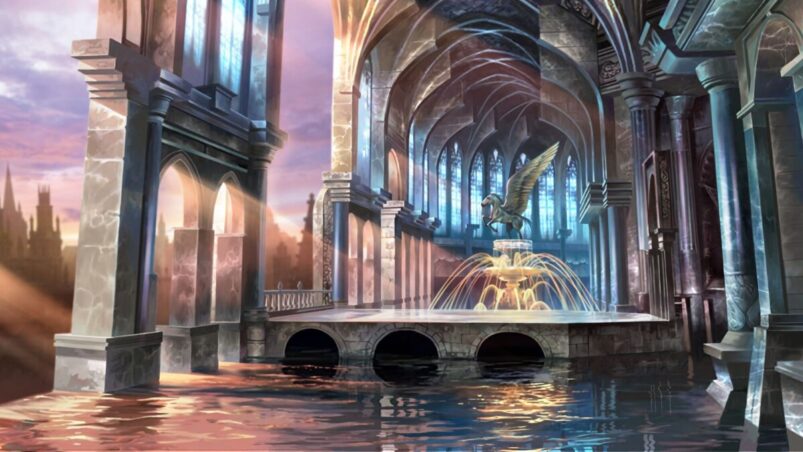 Welcome back to our semi-regular celebration of some of the best stages in fighting game history. If you’d like to have a read of some previous entries in this series, you can click the link right here, but for right now, we’re taking a brief little trip back in time, to a tale of swords and souls, eternally retold.

When it comes to stages within Soulcalibur, you’ve got your pick of the litter. Seriously, there’s so many great stages in this series that it’s hard to pick out a specific fantastic one. Lakeside Colosseum in Soulcalibur 2’s combination of history and music is fantastic, while SCV’s Tranquil Wasteland is about as close as Soulcalibur gets to emulating Tekken 5’s Moonlit Wilderness. The scorched hellscape of Soulcalibur 2’s Inferno stage is seared into my nightmares (along with Inferno’s creepy skull face), though that’s another story.

For a series that likes to boldly proclaim “welcome back to a new stage of history” practically every chance it gets, it would be somewhat of a misstep to have the actual stages be crap, but Soulcalibur mostly avoids this. You’ll probably be saying a stage is crap if you’re on the receiving end of a ring out, but that’s just the scrub in you talking. However, one stage has always felt like a cut above the rest, and that’s Soulcalibur III’s Lost Cathedral.

Set in an unknown location in Europe, Lost Cathedral feels like it’s about as far from civilisation as it gets when fighting in the game, which is strange. The Cathedral had to have been built by someone, but the arena surrounded by flowing water, the picturesque vista in the background and the almost heavenly quality of the architecture gives the Lost Cathedral an otherworldly atmosphere. It seriously feels like the room of a final boss fight in an RPG, which is funny considering it’s actually the second to last stage in the game’s Arcade mode.

In the game’s official lore, the Lost Cathedral is one of many battlegrounds between Siegfried and Nightmare, with the two sharing a complicated history. There’s a lot of lore within the series, but suffice to say, there’s no better place for a fated showdown between two titans, the clashes of their massive swords reverberating across this ethereal structure. It’s absolutely gorgeous in its design, while the worldbuilding around this stage pushes the quality even further.

Every round, the match begins with the vista in the background, but between the two fighters sits Soul Calibur and Soul Edge, both intertwined with each other after the former was used to stab the latter. Again, there’s a lot of lore. It’s a great bit of visual storytelling, especially if you’re playing as both Siegfried and Nightmare. For practically the entire game’s roster, their main goal is to obtain either one or both of those powerful weapons for their own purposes, so framing each battle on this stage to show what’s brought both fighters to this point is a masterstroke.

This is where one of the devs reads this and says it was coincidental, huh? Proper GCSE English teacher vibes here.

Matching up to the incredible visuals is the stage’s theme, Forsaken Sanctuary, which might just be one of the best tracks in the entire series. Soulcalibur 2 has some bangers, like Raise Thy Sword, Confrontation or even just the opening theme music, Under The Star Of Destiny. However, the organ-led symphony of Forsaken Sanctuary is a compelling musical accompaniment of two souls meeting to decide who lives and who dies. Or who gets knocked into the water and complains about the cheap loss for two hours.

While other Soucalibur games, chiefly SC and SC2, have been given multiple chances to shine over the years, it feels like Soulcalibur 3 was released and quietly forgotten about in quick succession. A stage like Forsaken Sanctuary, given the 4K and 60fps upscale treatment, could be one of many reasons to prove why Soulcalibur 3 is one of the best in the entire series. I used the Soulcalibur ranked list to argue for a SC3 port, and I’m doing it again, damn it.

READ MORE: Ranking The Soulcalibur Games From Worst To Best