Pick up something a bit different. 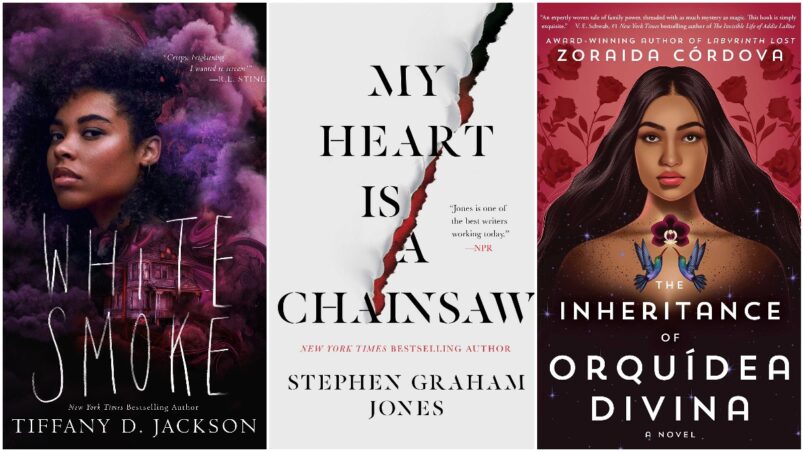 Humans often exhibit a fascination with the supernatural. Whether you believe in ghouls, spirits, or creatures who go bump in the night, many people tend to enjoy spooking themselves with an eerie paranormal tale. The horror genre works more as an umbrella rather than a straightforward descriptor about scary stories. Horror is a diverse term, bisecting other literary genres. Such genres can include thrillers, mysteries, fantasy, science-fiction, and even magical realism, where supernatural mythos or folklore plays a large part in constructing a horror atmosphere.

These diverse supernatural horror book recommendations blend several of the aforementioned genres together. Further, each book recommended here is written by a person of colour. Popular horror novels historically were written by white, male authors, save for a few ground-breaking white women like Shirley Jackson and Mary Shelley. Are you looking for more diverse horror literature by people of colour? Find your next favourite diverse supernatural horror book in a genre rife with nefarious novels.

1. The Between – Tananarive Due

Horror, science-fiction, and magical realism combine in The Between, a novel about a man trapped in between reality and dreams.

As a child, Hilton watched his grandmother die twice. Although she never rose from the grave after saving Hilton from drowning and sacrificing her own life in the process, thirty years later, nightmares torment Hilton in adulthood. Hilton’s wife, the only African-American judge in their county, begins receiving racist, life-threatening notes from an anonymous sender. Coupled with paranoia over the notes and recurring visions of his grandmother, Hilton descends into madness as he begins to experience living two different versions of his life.

The Between plays mind games with both its main protagonist and its readers. We are kept in suspense along with Hilton, never quite trusting his unreliable character, yet still tending to side with him due to his trauma and grief. In a Black-authored horror novel about a Black family, readers are invited into a story where malevolent forces can take a mental form or the physical form of racist individuals. Fans of Jordan Peele’s Us will devour The Between.

Branching stories across generations intersect as a Hispanic family unearths truths about their grandmother’s former deals with devils in The Inheritance of Orquídea Divina.

The Montoya family grew up familiar with the supernatural. Unexplained occurrences at their grandmother’s home in Four Rivers never scared them as children. Instead, the strange house with its curious garden and always stocked pantry only piqued their curiosity about the unexplained. When Montoya matriarch Orquídea Divina invites all the grown-up children and their new families to her upcoming funeral at her same house in Four Rivers, the Montoyas are faced with a terrifying curse from their grandmother’s past. Orquídea Divina passes away, leaving an inheritance behind the Montoyas never anticipated.

The Inheritance of Orquídea Divina focuses on a Hispanic-American family and the familial ties that bind them together across countries. This enchanting novel also feels reminiscent of Gothic literature. Instead of pushing obvious horror scenes to the forefront, the book inserts the stressfulness and imagery found in Gothic horror underneath the surface of rhythmic fantasy prose. The Inheritance of Orquídea Divina reads like a psychedelic experience. Magical realism and an emotionally driven narrative are the nexus of this novel. Frights are interspersed along the way.

Young socialite Noemí travels to her extended family’s isolated house after receiving a frightening letter from her cousin, Catalina. Inside High Place, a remote house far from Mexico City, Noemí finds secrets and sickness corroding both Catalina and the rest of the mansion’s unusual inhabitants. Noemí wants to flee from the haunted house and rescue her psychologically damaged cousin, but forces beyond the grave force her to stay.

If you love a refashioned haunted house story written in breath-taking prose, Mexican Gothic delivers a haunting tale of woe. Mexican Gothic remains Moreno-Garcia’s most beloved work thus far in her career for a reason. Every Silvia Moreno-Garcia novel captivates readers through vivid sensory language and setting as a character, but this book innovatively transcends suspension of disbelief. This disturbing horror book is a great introduction to her oeuvre. Mexican Gothic’s inclusion of science, history, and Gothic literature facets add complex layers of realism to the supernatural horror story. Fans of Wuthering Heights will appreciate the romance and Gothic elements. Body horror film fanatics will be drawn into the grotesqueness inside the spine-tingling pages.

4. My Heart Is a Chainsaw – Stephen Graham Jones

My Heart Is a Chainsaw is an homage to slasher films.

By far the most graphic and brutal entry on this list, the novel stars a slasher film-obsessed Half-Native American teenager called Jade who is already an outcast in her gentrifying lake town. A fixation on slasher films helps Jade cope with the horrors of her abusive father and friendless existence. When a murder actually occurs in her rural town, Jade immediately feels compelled to use her knowledge and solve a real-life murder. More bodies start appearing. No one takes Jade’s fear that a real horror villain is taking revenge seriously. Jade thinks she knows how to catch the predator, yet forgets that if she’s not a final girl, she too can become the prey.

Every slasher movie fan should read this diverse supernatural horror book. My Heart Is a Chainsaw references dozens of slasher horror films, with the protagonist taking special interest in ones where masked killers pursue vengeance to right wrongs taken against them. When the pace of the book finally picks up after about 100 pages, it charges forward with a knife and slashes through every page in its way. Stephen Graham Jones is making a name for himself as a horror author. This Native American slasher novel bludgeons the genre, acts as a commentary on Indigenous issues, and presents a realistic portrait of a young woman internally torn apart by tribulations.

A blended family moves into a house overrun with apparitions in White Smoke.

Marigold, a Black teenager, already feels dissent toward her mother’s new white husband and his cruel daughter. When her mother is selected for a free residency program, the family moves from sunny California to the dreary Midwest. She soon learns about why the houses around her are abandoned on Maple Street and how an unfortunate history burnt down any hope for Black families to succeed in the town. But shocking supernatural episodes inside her own home become Marigold’s main source of terror. Faced with a haunted house and a haunted past, no one is safe in the house on Maple Street.

White Smoke is a psychological thriller mixed with stomach-churning horror. Descriptions of missing objects and sinister visions conjure an atmosphere of terror vividly. Beyond the explicit horror, a majority of the terrible feelings White Smoke induces emanate from the alarming tragedies minorities face in reality. If you like Jordan Peele’s Get Out and “The Monsters are Due on Maple Street” episode of The Twilight Zone, this diverse supernatural horror book will satiate all your spooky desires.

READ NEXT: 12 Best Goosebumps Books You Should Read