It's not all Grinches. 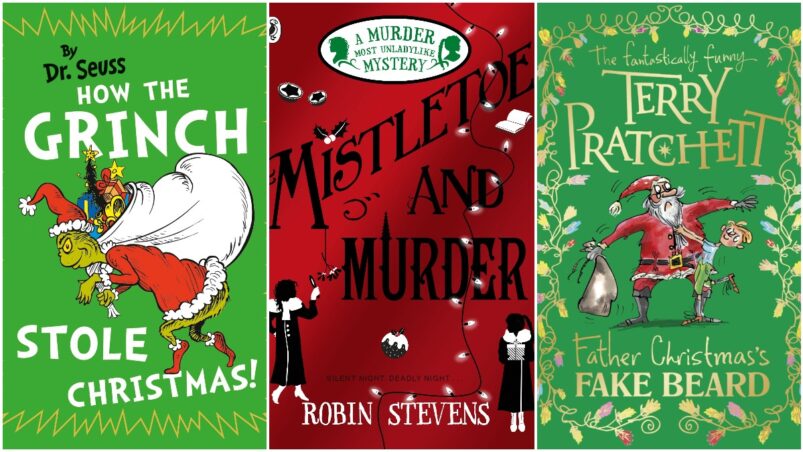 The tales of our childhoods stay with us long after we are supposed to have outgrown them. And how much more magical and memorable are they when they’re set at Christmas? Should you be looking for a present to give a youngster, you can’t do much better than a book, especially if it’s one of the best Christmas books for children.

However, some snow and a few jingling bells do not make a Winter Wonderland. To find the absolute best Christmas books for children, we enlisted the help of Santa’s elves. They snuck into bookshops across the country and have guaranteed that these are all true seasonal classics, both old and new.

The Best Christmas Books For Kids

Matt Haig is a master storyteller, and his books for children are just as emotion-heavy and full of wisdom as his adult fiction. A Boy Called Christmas takes us on a wintery adventure with a young boy called Nikolas (not Christmas? Guess you’ll have to read the book). From a humble beginning, his journey takes him further than he could have ever dreamed.

This Father Christmas origin story is aimed at children of around nine and above, but really anyone can learn from it. Two sequels follow behind it, forming a delightful trilogy that would make the perfect present for any young bookworm. A Boy Called Christmas has also been made into a recent film.

2. A Children’s Literary Christmas: An Anthology Edited by Anna James

If you can’t settle on just one wonderful winter story, how about an entire anthology? There are some big names in this book – from A. A. Milne to Shirley Huges to C. S. Lewis, with Matt Haig, Charles Dickens, and Laurie Lee tucked in between.

With five sections, each considering their own particular genre of Christmas takes, there will be something in these pages for every reader of any age. Anthologies are like mini-libraries, and a library is by far the best gift anyone can either give or receive.

3. A Christmas Carol by Charles Dickens

Amongst other odd traditions, the Victorians were very fond of ghost stories, and apparently would regularly tell them on Christmas Eve. Charles Dickens tapped into that tradition when he penned his thinly veiled critique of the rich/poor divide in Victorian London. While not initially intended as a children’s book, this tale is easily adapted with some great illustrations and more child-friendly language. Get hold of almost any child-friendly adaptation.

Generosity and awareness of how our actions can impact other people are always good lessons to share with youngsters, especially at Christmas. Should they wish to see a visual demonstration of the story too, A Muppet Christmas Carol retells it beautifully.

4. The Christmasaurus by Tom Fletcher

Yes, this is indeed by the Tom Fletcher of McFly fame. A recent trend has seen many celebrities pen books for children. Usually we’d very strongly be in Camp Not A Fan, but there are rare gems to be discovered in the most unexpected of places.

The Christmasaurus is a middle grade novel about a boy called Williams Trundle who uses a wheelchair (A+ for representation) and goes on a magical Christmas Eve adventure, where he meets a dinosaur with a dream. With lessons on friendship, difference, kindness, and more, this sparkly Christmas tale has fans of all ages. Also available is a picture book for younger readers, a musical version of the story, two sequels, a stage play, and apparently an upcoming animated film.

There’s not just one tale, but many (actually it’s ten) in this delightful collection. In true Pratchett style, this is Christmas but definitely not as you know it. Promised delights inside include a pet abominable snowmen, Father Christmas working in a zoo, an exploding mince pie, and much more chaos besides.

Should you wish to introduce a youngster to Pratchett’s odd and wonderful storytelling, this is a festive place to start. Laughs are of course guaranteed.

Tolkien’s son, Christopher, spent his whole life sorting through his father’s old drafts and writing, and he still hadn’t finished when he too died. Amongst that mountain of literature, much of it about mountains and hobbits and magic, Tolkien also wrote several letters addressed to his children from Father Christmas.

In this book they have been collected, and were published on the third anniversary of his death. In the letters are wonderful tales detailing Father Christmas and his helpers’ adventures, some of which may or may not have inspired parts of The Lord of the Rings. Full of the lyrical magic you’d expect from Tolkien, this book is a true Christmas delight.

Are you too happy at Christmas? Are the kids having too much fun? Then perhaps it’s time to pull out this delight. Responsible for fuelling many a young mind with awful history facts, Deary has also turned his attention towards Christmas.

This book finds all the parts about this season that aren’t so jolly or bright and pairs them with illustrations and jokes galore. If the kids in your life only know Horrible Histories from the TV series, they will thank you for introducing them to the books too.

8. How the Grinch Stole Christmas by Dr. Seuss

The Grinch was the original mind behind Cancel Culture – he was cancelling Christmas before cancelling became cool (no, it’s definitely not cool, kids). Dr. Seuss’ rhyming tales are childhood staples for many, and How the Grinch Stole Christmas comes with zany characters, fun illustrations, and a heart-growing message wrapped up in a bow.

It’s great for teaching youngsters about inclusion and what’s really important about our winter celebrations. There are also about a billion different film versions, including the live action featuring Jim Carrey painted lime green.

9. Mistletoe and Murder by Robin Stevens

Robin Stevens is a modern master of murder mystery stories for children. Her Murder Most Unladylike series has eleven editions, along with four mini-books. Mistletoe and Murder is the fifth in the series and, as the name suggests, is set at Christmas.

Daisy Wells and Hazel Wong spend Christmas together in Cambridge, hopeful of a jolly holiday. Instead they uncover an accident that proves to be a murder. Should wintry adventures and elves wrapping presents not be exciting enough for young readers, this boarding school detective caper may just be their cup of tea.

1,209 Reviews
Mistletoe and Murder (A Murder Most Unladylike Mystery)
$8.99
Buy on Amazon

10. The Night Before Christmas by Clement C. Moore and Christian Birmingham

American writer Clement C. Moore is credited for writing the classic Christmas poem ‘Twas the Night Before Christmas’, also called ‘A Visit from St. Nicholas’. It was apparently composed for his daughters as a Christmas present, and in the near two centuries since it was written, it’s become a firm festive fixture for many.

There are an array of picture book versions, some rewritten and some with the original text. This version with illustrations by Christian Birmingham is very beautiful and very in keeping with the original spirit of the poem, which is arguably the best of the best Christmas books for children.

All aboard for more beautiful pictures and Christmas wonder. This picture book features a magical train that picks up children on Christmas Eve for a special journey all the way to the North Pole. The stop motion film featuring Tom Hanks is also rather wonderful, but the true heart of a tale is always in its original.

How many of us boring old adults can say we can still hear the ringing of the bell? Maybe the sound will return to us if we take the train ride one more time.

12. The Snowman by Raymond Briggs

Would you like to cry on Christmas Day? If so, watch The Snowman. This beautiful film has had audiences sobbing since its first showing on Boxing Day in 1982. It was based on the picture book of the same name, written by Raymond Briggs.

This bittersweet tale of friendship and adventure is another timeless Christmas treat. The watercolour illustrations in the book are so whimsical and pretty, making the story easily one of the best Christmas books for children.

The Nativity is, of course, the original Christmas story. Whether you are religious or not, this wonderful picture book retelling has an important lesson to share with children. Refuge by Anne Booth and Sam Usher focuses not on Jesus’ birth, but instead his parents’ flight to Egypt when they learn Herod has issued a decree that all baby boys must be killed.

It shows the young family seeking refuge and hoping for the kindness of strangers. In our world of unrest where many families are forced to flee their homes, showing our children how we can help people like this could never be more important, especially at Christmas.

14. The Toys’ Christmas by Claire Clement and Genevieve Godbout

How does Father Christmas always know what children want for Christmas? There’s a very sweet answer according to this gently wonderful picture book.

Noah is heartbroken to find his beloved toy elephant Fanfan missing. It turns out Fanfan has gone on a quest to the North Pole to make sure Noah’s Christmas present will be absolutely perfect. This is a fabulous introduction to Father Christmas for very little ones.