No one is ready for Mr Gum. 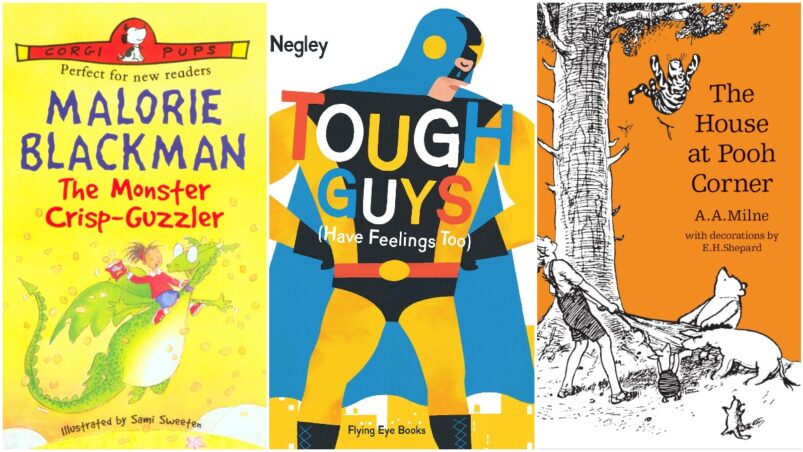 Any list of the best books for 6-year-olds is going to have a lot of variety on it. By this age, some kids are already reading for themselves and starting to explore short chapter books. Some are enjoying more complicated, longer picture books, and some are re-visiting old favourites over and over as they practice their own reading skills. And it’s a fair bet that most 6-year-olds also still enjoy sitting down with their grown-ups and having a bedtime story, in whatever form that takes. This list of the best books for 6-year-olds celebrates that variety, and picks out some newer authors alongside the older, reliable ones.

The Best Books For 6-Year-Olds

1. The Cat And The King – Nick Sharratt

Nick Sharratt has already made an appearance on our list for 4-year-olds, but did you know he’s also been moving into the world of early reader chapter books? The Cat And The King was his very first chapter book, and you will be relieved to know that his longer books are still illustrated in his distinctive style.

In this chapter book debut, a streetwise cat and his owner, the king, have to move after a dragon burns down the castle. In funny Sharratt style, the cat introduces the king to a brave new world full of things like washing up, riding the bus and going shopping.

Sharratt makes a surprise appearance again here, this time alongside his long-time collaborative partner, Jacqueline Wilson. She is best known, of course, for her middle grade books, but here in The Dinosaur’s Packed Lunch, Wilson turns her hand to a story for younger readers.

On a school trip, Dinah is the only kid who hasn’t got a packed lunch. When a friendly iguanodon decides to help her, there is bound to be chaos. Sharratt’s bright and bold illustrations have always complimented Wilson’s witty and engaging style, so they definitely deserve a place here.

Dav Pilkey should come with a warning; once you get a kid hooked on his hilarious and inventive graphic novels, he might be all they want to read. Luckily, his Dog Man series had ten installments and counting, so there will be plenty to keep his young fans busy.

Dog Man makes the list of the best books for 6-year-olds because it is an absolute riot that kids will love. But it’s also an easy read for those trying out reading for themselves for the first time, and introducing graphic novels to younger children also shows more reluctant readers that there’s nothing wrong with favouring stories with lots of pictures as they get older.

4. Dogs In Space: The Amazing True Story of Belka and Strelka – Vix Southgate and Iris Deppe

Around 6 years old is a great time to start introducing non-fiction to kids, and what do a lot of kids love? Animals and outer space! This book combines those two things to make it the perfect addition to a list of the best books for 6-year-olds.

Dogs In Space tells the true story of Belka and Strelka, two stray dogs who became the first ever living creatures to orbit the earth. Southgate writes in a way that is engaging for kids and not at all patronising, and Deppe’s super cute illustrations just bring the book to life. And don’t worry – the dogs made it back to earth alive and well, so there won’t be any nightmares.

5. The House At Pooh Corner – A.A Milne and E.H Shepard

This list definitely needs a classic, and it’s time for Winnie The Pooh – although he doesn’t really need any introduction, of course. If kids only know Winnie and his friends from the Disney movies then they definitely need to be shown the books, and Shepard’s beautiful illustrations. The House At Pooh Corner is a perfect bedtime read.

The House At Pooh Corner is the second Winnie story, but it is the volume in which we first meet Tigger, who is probably the most beloved character from these stories overall. He’s the reason that we’d put this story and not the first on a list of the best books for 6-year-olds.

Like Jacqueline Wilson, Malorie Blackman isn’t known for her early reader books, but in The Monster Crisp-Guzzler, she demonstrates perfectly why she is a great writer no matter the age of her readers. Sweeten’s illustrations are lovely too, the characters bold, simple and engaging.

Mira’s teacher turns into a dragon when she eats crisps, which is very useful indeed when the class runs into trouble on a trip the seaside. Mira is a very sweet, first-person narrator; Blackman draws young readers in with her chatty, witty character, and independent readers will have no trouble keeping up with the story.

This is Julia Donaldson’s last appearance on our lists, and it’s with a book that definitely is geared towards older picture book readers. This is another great one to curl up with on the sofa and share between an adult and child, as there’s a lot to talk about in the seemingly very simple story.

In the story, a little girl plays with a string of paper dolls that she made with her mother. The dolls are threatened by all sorts of things, including a crocodile and a tiger, but it’s a boy with a pair of scissors who in the end cuts them to pieces. The Paper Dolls is a story about letting things go, and understanding that nothing is really gone as long as it lives on in your memory.

8. Poppy And The Blooms – Fiona Woodcock

Poppy And The Blooms is a gorgeous book, both in its message and in the beautiful illustrations by Woodcock, each of them a work of art in themselves. It’s also the perfect addition to a list of the best books for 6-year-olds, because it teaches kids that even the smallest person can make a difference.

Poppy and her flower friends are on an adventure to the city, after hearing that the last park in town is closing. The brightly coloured flowers journey through the dreary city, spreading their colour as they go and making the grey, boring city into a much more magical place.

Sleep Well, Siba & Saba is another perfect bedtime read, as well as being a picture book that less confident young readers will be able to enjoy on their own. Sisters Siba and Saba are always losing things– sweaters, shawls, shoes. Everything except each other. One night they go to sleep and don’t dream of the things they have lost. Instead, they dream of things to come.

Sleep Well, Siba & Saba is a very beautiful book; van Doorn’s illustrations are rich and engaging. The story, however, is the true standout here. In very few words, children are encouraged to dwell not on the past but to look forwards to the future and things that will come to them.

If we have to explain why a book like this is on a list of the best books for 6-year-olds, then it may be that you’re part of the problem. We all know that there’s a real issue even now with young boys being taught to be tough, hiding their emotions from an early age. There cannot be enough books like this to show them that the opposite is true.

11. The True Story Of The Three Little Pigs – Jon Scieszka and Lane Smith

The True Story Of The Three Little Pigs is like fake news 101 for kids, first published years before fake news was ever a thing. It’s also a very funny and engaging story for kids, telling the story of the three little pigs from the point of view of the much-maligned wolf.

There is so much happening on every page that it makes a great picture book for older kids, as they will want to linger on the newspaper articles and other details that help enrich the story. The wolf is also a great narrator, and by the end of the story, kids will have a very different view of one of their favourite fairy tales.

It’s impossible to have a list of the best books for 6-year-olds and not include Mr Gum. These books are perfect early readers for confident youngsters, and also great to share with adults. Grown ups will find Mr Gum horrible. Kids love him.

Mr Gum is a nasty, gross man who hates children, animals and fun of any kind. He lives in a town full of interesting characters, like Billy William The Third, the horrible butcher, and Alan Taylor, the gingerbread headmaster. Yes, gingerbread headmaster. These books are a wild ride from start to finish, and kids can’t get enough of them.

READ NEXT: 12 Best Books For 5-Year-Olds