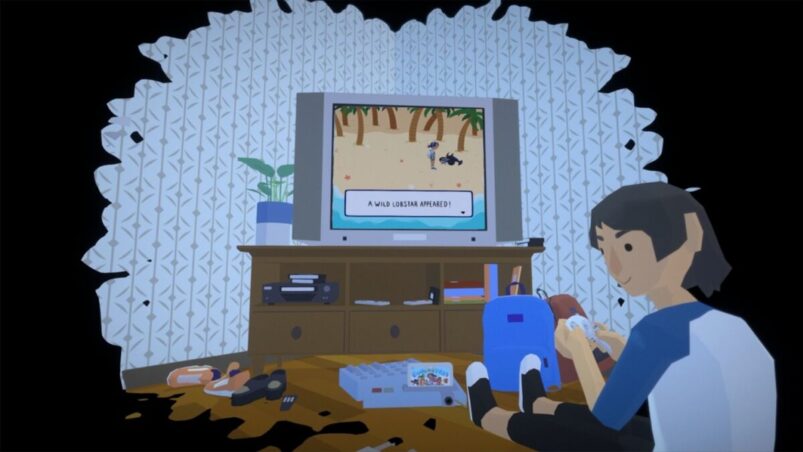 2021. It has been what some call “a year”. To celebrate this collection of sun rotations, we’re looking at the best games of 2021. Next up: Before Your Eyes.

Before Your Eyes made me cry; piss tears, even. I mention that upfront because, thanks to some pig-headed machismo instilled in me from when I was young, I only cry when people die. I’ve cried a lot more than normal over the last couple of years, but still not a “normal” amount.

This stupid mental block turns me into a bit of a statue when it comes to sad movies — I can recognise that Marley was a very good boy, but there’s a cynicism that stops Owen Wilson’s sad face from really hitting me like the filmmakers so desperately want it to. But Before Your Eyes, man — it had me blubbing like a tragic whale.

Before Your Eyes is one of the most affecting games of the year, a narrative game with a hook so simple yet so genius that WB Games would definitely patent it if they were the publisher.

To go into too much detail would really spoil it, the best way to experience Before Your Eyes is entirely blind — no pun intended. The long and short of it: You are in limbo and meet a wolf (dog? coyote?) in a sharp suit who wants to guide you to the afterlife, but first you have to tell him your life story through blinks. Actual, real life blinks that you do as a person towards a webcam. Not only is the technology super straightforward to figure out, it’s pretty much flawless even though my glasses had as much glare as an anime villain.

You start, well, at the start of the main character’s life, as a young, quiet boy with parents who love him very much. Every time you blink, time moves forward, whether it’s a few minutes, weeks, months or even years.

Trouble is: sometimes you don’t want to blink. Sometimes you want to just sit and listen as your parents talk to you about their day, enjoy looking up at the stars, or try to make every second count in a final phone call with someone you hold dear. I often found myself frustrated at not being able to hang onto these precious moments, but isn’t that what life is? To never be able to have everything you want, to not get stuck on “could haves “and “should haves”, to realise that life simply can’t stand still? You have to let go. It’s a devastating lesson that Before Your Eyes delivers masterfully.

There isn’t much grand deviation from this gameplay, though there are a few sections where you have to close your eyes and focus on hushed discussions in other rooms instead. There’s also sequences where the game refuses to let you close your eyes and gloss over reality, with you having to keep your eyes open long enough for revelations to come pouring out to heartbreaking effect.

One sequence is more genius than the rest, almost dastardly in how much of a punch to the gut it is. As a character delivers a rousing speech, the camera cuts to someone else saying the same thing. As emotions rise and you find yourself blinking more and more, the perspective shifts to and fro constantly to the point where it then makes you blink even more. I really can’t undersell how special a scene it is. It’s my favourite gaming moment of the year.

I also can’t undersell just how essential Before Your Eyes is in general. It’s a game anyone who’s ever lost someone or felt lost themselves should play. If you’ve ever just wanted a game to land a direct hit on your heart, don’t let Before Your Eyes out of your sight.

READ NEXT: Littlewood Gives You A Whole World | Best Games of 2021