Dracula has risen once again in a new three-part BBC series from the guys behind Sherlock - with all that this entails. 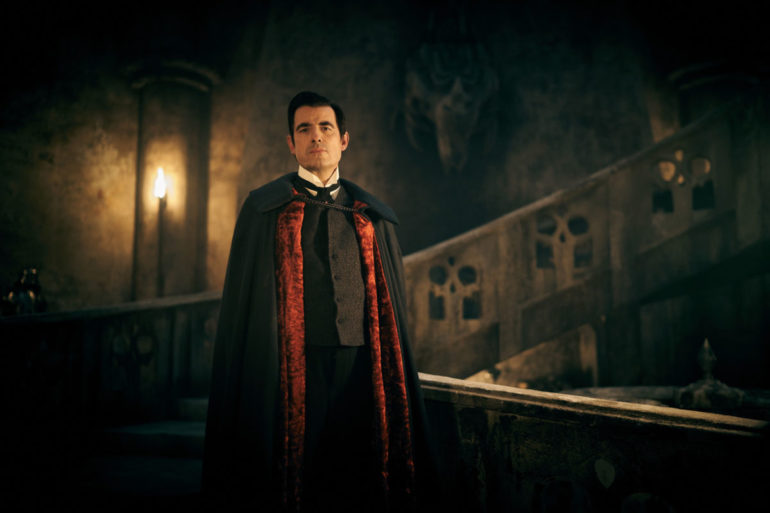 Dracula is a well known story and with any screen version there is always the danger that it’s treading all too familiar ground. The character has had a pretty lengthy on screen lineage, starting way back in 1931 with Bela Lugosi donning the signature black cape. Since then regular versions and sequels have graced the screen, most notably Hammer, who produced a number of Dracula-focused pictures from the late fifties until the mid seventies. In fact there has been a Dracula film or TV show in every decade since the thirties, which shows just how long it has been going.

Back in 2014, Dracula Untold attempted to put a new spin on the classic tale. Although there were some interesting ideas and themes the film wasn’t anything special. This time round, though, the creative partnership behind Sherlock are the ones in control. That is a good sign to start off with as Mark Gatiss and Stephen Moffat provided an interesting style and approach to the character of Sherlock Holmes.

The BBC’s Dracula is a hybrid of a show. It incorporates certain themes, ideas and concepts from Bram Stoker’s original novel. At the same time there are a number of twists and changes in this version. This is to expected, as Sherlock played around with many of the original characters and narratives. In the case of Dracula it has its pros and cons. For example the way they present and explore the character of Van Helsing is very effective. It is refreshing as it hasn’t been explored that way before. On the other hand they make some quite radical changes to Dracula himself and the character twist with him in the third episode is a little disappointing.

The first episode is set in 1897 and follows very much in the vein of the original novel. There’s the creepy Translyvanian castle, the snow-covered surrounding landscapes and the titular character himself. Later into the episode, though, we see notable changes starting to take place. There are some surprising character reveals and interesting directions the narrative takes. However, despite these alterations the opening episode very much embraces the roots of Dracula. It is gothic, sinisterm and deeply unsettling: the tone and style feels very much in keeping with the original source material.

This is where Gatiss’ influence very much comes into play. He has a deep interest and love for the genre of horror, having created several documentaries on the subject as well as a number of other creepy television dramas. His three part History of Horror documentary and his ghost series Crooked House are two key examples of this. I was fully prepared to be unsettled, as I am not a big fan of horror myself. However I have never found vampires particularly frightening. That was until seeing the first episode of Dracula.

It doesn’t rely solely on a series of jump scares like so many modern horror films. Instead it takes it time building up the tension and suspense. The moments of surprise work well and I found myself jump a number of times when watching. It is made all the worse by the unsettling, nail biting sections before and after.

Part of the reason it is actually genuinely scary is the use of prosthetics, makeup, and puppetry. There are moments when CGI is used, but this isn’t too often.  Today more than ever, computer effects can look great, but too often they can lack the physical weight that we see produced by a real actor underneath ghastly makeup. This is further enhanced by the fact that everything is slightly out of sync. The undead nasties that Jonathan Harker (John Hefferman) unfortunately runs afoul of make jerky and twitchy movements, going from slow shuffling to sudden speed in a very short space of time. Their bodies are hunched and warped, which adds to the already eerie vibe.

The one use of puppetry is very effective, as again the movement of the puppet is slightly mechanical and rigid. In both instances they are distorted or possessed versions of what they once used to be, and it’s utterly terrifying to behold.

Unfortunately, those fantastically crafted horror moments don’t continue in the second episode. There is a certain amount of tension and suspense, as we see Dracula’s victims getting picked off one by one. But there is only one jumpy moment in the whole episode and the rest ironically lacks bite. This is mainly down to the fact that the second episode struggles to balance its mixture of horror and comedy. In the first episode, there is a good distribution between scares and laughs.

The show deliberately parodies itself throughout, even using characters to point out the ridiculous conventions of horror and Dracula’s portrayal. This paradoxical nature is both clever and amusing at first, and it’s entertaining to see a series not take itself too seriously.

But the humour, self-awareness, and overly dramatic acting becomes a little overpowering in the second episode. It very much feels like it is being too clever for its own good. Admittedly, in some circumstances it works, but in others it is irritating and gets in the way of the story. A prime example of this is when Dracula and Sister Agatha are playing a game of chess. These scenes are cut in between the main storyline sequences of the episode. They are entertaining at first but after a while the constant self aware nods and jokes begin to become too distracting.

One big problem Dracula has is in regards to certain character decisions. The sinister vampire bests his foes by seducing and outwitting them. There are a handful of sequences where we see this happen. But more often than not it is a result of characters making really stupid decisions.

While it is apparent that they are being influenced by Dracula, their actions never entirely make sense. Dracula’s hold on them is not clearly enough highlighted or the characters are not well developed enough. Either way it is a problematic aspect of the show.

Claes Bang is fantastic as Dracula, both looking and acting the part of the bloodsucking Count. He manages to be creepy, charming and entertaining all at the same time and has a weighty on screen presence throughout. There is an interesting dynamic between him and Dolly Wells, who plays his adversary Sister Agatha. This is aided by some good back and forth between the two, as they both try to outsmart each other.

The second episode is still enjoyable to watch and the way Dracula selects and feeds upon his victims is well done. It just doesn’t match the first episode both in terms of scary moments and deep character development. Thankfully this is resolved in the third and final episode. Although it is technically the most experimental in its design, the approach it takes works extremely well. There are echoes of Sherlock in its format with its decision to jump forward to a contemporary setting.

As to be expected, Gatiss and Moffat use the modern backdrop to great effect. Dracula’s interactions with the new world are presented brilliantly with genius little touches such as having a lawyer and using dating apps to his advantage. The last episode also stands out with its striking imagery and visual aesthetic.

This is an aspect of the show that has been strong throughout. But in the last episode in particular there are a handful of surreal sequences that are hugely effective and impacting. There is also a great colour palette on offer, ranging from rich reds to dense blacks. It all serves for a great visceral texture and feel. It also reintroduces that tension that was created in the first episode. The suspense is very well built up, particularly at the beginning as you are waiting for something horrible to occur. With its shift to a contemporary setting it bears similarities to shows such as Luther, especially with Claes Bang’s calm and cold portrayal of Dracula. The character is after all the king of serial killers. The finale also delivers on the scares with some truly bone-chilling moments and disturbing makeup that is as effective as it is sickening.

There is also a good level of character investment, including in Dracula himself and I felt engaged and connected with all of them during the course of the episode. In the first episode you really feel Harker’s terror as he tries desperately to escape the castle. In the second episode, the investment isn’t the same because there are too many characters and they are all dispatched fairly swiftly. In the third episode the investment returns once again as you understand the struggles the various characters face when trying to deal with Dracula.

Despite Dracula losing a little bit of momentum and impact in the second episode, it more than makes up for it in the opening and closing episode. It has some genuinely terrifying moments with some decidedly disturbing sequences and a pervading creepiness that will make the hairs on the back of your neck tingle.

The bottom line is that this new version really captures the essence and tone of the character and story. The dark humour when used well works for the most part, and both Claes Bang and Dolly Wells demonstrate their aptitude for comedy as well as drama. The changes from the book, and twists that the programme employs, are done very well and although not all of them are successful, they are still interesting and cleverly thought out. Bang’s cold, cunning, and yet charming performance has elements of previous Draculas, but he also brings something new to the role – it’s almost hypnotic to watch. 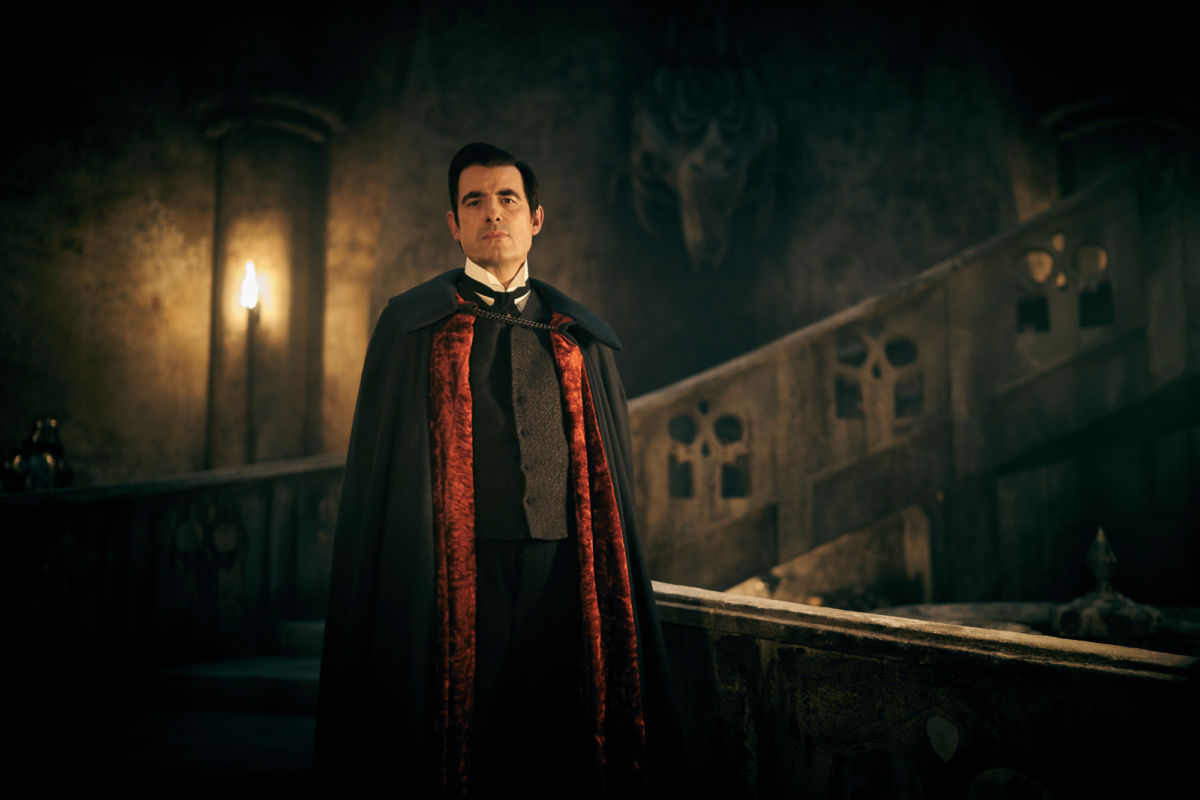 Verdict
Gatiss and Moffat's gothic tone and spooky have created a spine-chilling adaptation, and although in places it bites off more than it can chew, it certainly has a decent pair of fangs.
7.5
Cultured Vultures is a pop culture website established in 2013 covering all things gaming, movies, and more. We eat your words.
All The News On The Biggest Games