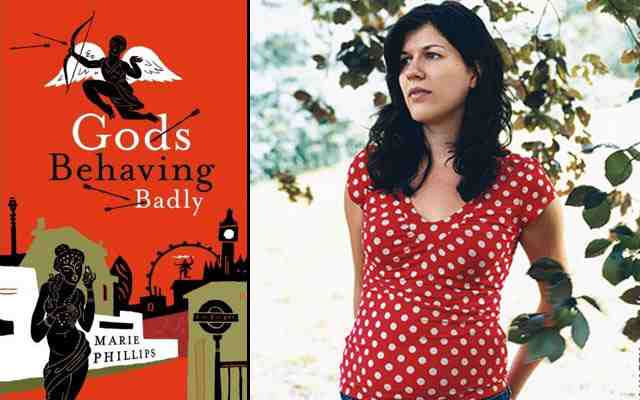 ’ recently featured on a Cultured Vultures recommendation list for excellent first time novels by female authors. Cultured Vultures caught up with Marie to ask her about her books, her inspirations and the issues that come from being a woman in a boy’s game.

Thank you so much for agreeing to talk to Cultured Vultures! How is life in your part of the world?
Hi! Well, I’m in London at the moment, looking after my mother who broke her leg and arm in a car accident a few weeks ago. I grew up here but usually I live in Amsterdam. It’s nice to live close enough to be able to come back when I’m needed.

Your books ‘Gods Behaving Badly’ and ‘The Table of Less Valued Knights’ are great comedy novels, but I was also impressed by how closely you stuck to the themes and ideas of the source material. Could you tell us a bit more about your decisions to focus on Greek gods and the King Arthur legends?
The idea for Gods Behaving Badly came to me in a flash of inspiration. I was helping a friend make a documentary in a school, and the teacher was talking about the differences between the gods of the ancient world and the Judeo-Christian God, and I thought: what if the Greeks were right? I’d always loved the Greek myths, so the process of researching and writing that novel was great fun.

When I was looking for an idea for the next book, I thought it would be enjoyable to find another mythological source to play with. I knew less about King Arthur than I did about Greek mythology, so that one was more of a journey of discovery. There’s a huge amount of Arthurian literature and it varies a lot in terms of how interesting it is. A fair bit of it is just one or other of the knights walking along, having a joust, walking along, having a joust, and I incorporated a bit of my frustration with the repetition into the story. Being a Greek god seems to me to be more fun that being an Arthurian knight, if you had to choose.

‘The Table of Less Valued Knights’ was longlisted for a Baileys Women’s Prize in Fiction; how important do you feel such prizes are for the advancement and celebration of women in literature? Sometimes I feel personally that writing is still a man’s game, especially when it comes to what is perceived as ‘serious literature’.
You can’t ignore the evidence that literary fiction remains the preserve of white men. There have been so many statistical analyses of review sections of newspapers, or who gets nominated for prizes. While things remain unequal, you need prizes like the Baileys that recognises women’s writing, the Green Carnation for LGBTQ writing, and so on, to make sure diverse voices are recognised.

My personal experience is that I have a large, supportive network in the book world, both of people that I know personally and of others that I have encountered through social media. These people are male, female, gay, straight, trans, white and of colour. There’s a huge community of people out there who want things to be fairer, and we’re all looking out for each other. On the occasions that I do encounter sexism, it’s always a shock, and it’s often because people can’t seem to square what I write with the fact that I’m a woman. The people who think that women can’t be funny – those people are beneath contempt. They are entirely welcome never to read a word I write. To go back to prizes for a moment, I’ve always assumed I would never be considered for any kind of prize because my kind of writing isn’t thought of as serious or accomplished enough. But that’s not about being a woman, it’s about writing humour. When I got longlisted for the Baileys I couldn’t believe it. A friend texted to congratulate me and I told her she’d got the wrong person. There’s a great essay of G.K. Chesterton’s, which Terry Pratchett cited in his own last book of essays. It says that the opposite of funny isn’t serious, the opposite of funny is not funny. You can be serious and funny. Look at Kurt Vonnegut.

If you were given the power to change one thing about the world of literature, what would it be?
I want the good books to be the ones that get read, no matter who wrote or published them.

When you are writing, do you have a routine that helps you stay on task?
Yes, I use the Pomodoro Method of timekeeping. You use an alarm to make yourself work in focused 25-minute stretches, with five-minute breaks in between, and take a longer break every two hours. It’s an amazing productivity tool, I’d recommend it to everyone regardless of their line of work, though make sure you have an alarm that vibrates if you don’t want to be thrown out of the library!

What’s on your to-be read pile at the moment?
Let’s see, it’s right in front of me. Louis de Bernieres’ ‘Birds Without Wings

’, which was a birthday present. Chimamanda Ngozi Adiche’s ‘Half of a Yellow Sun

’ – I absolutely loved ‘Amerikanah’ and I hear that this is even better. There’s a collection of Ursula le Guin short stories – another gift – and Edna O’Brien’s The Country Girls trilogy, which I rescued from a pile that my aunt was about to give to a second hand shop. Oh, and I’m awaiting the new Jennifer Close novel, which her American editor is sending me a proof of, because I was so crazy about ‘Girls In White Dresses’.

Also I’ve just finished ‘The Unbearable Lightness of Being’, which was extraordinary. I want to recommend it far and wide, because it took me years to get past my fear of the title. I only read it because it was quoted in ‘The Most Human Human

’ (Brian Christian’s book about Artificial Intelligence) and from just a few sentences I knew I had to read the lot. It’s an incredibly wise, insightful book, and so much more readable than you might expect from that title. Do not fear the title! I will be reading more Kundera for sure.

Marie regularly updates her blog, covering topics from TV to books, with a healthy sprinkling of opinions, which is well worth a read. You can also follow her on Twitter, @mpphillips.