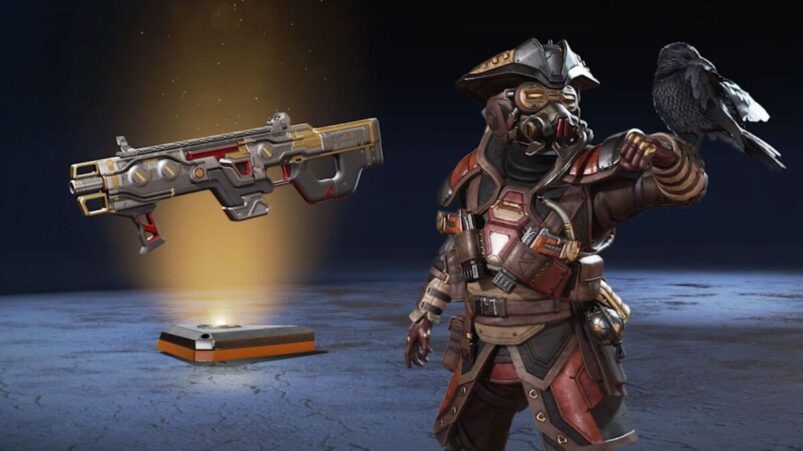 The Apex Legends Raiders Collection Event (and the Holo-day season) is almost upon us. Here’s what kind of treasure and trickery can be pilfered from this season’s new pirate-themed Collection Event, which launches December 7th, 2021.

Any pirate worth their saltwater knows that free treasure is the best treasure. Respawn knows it, too, and is gifting players with a free rewards track.

By completing event challenges to collect 5,000 points, players will receive a banner badge and loading screen, two sets of character trackers, a swashbuckling Crypto skin, an Alternator skin, and a Legendary-tier Hemlock.

In addition, two gun charms will also be included: one is a golden skull with crossed swords, while the other features Ash’s beloved rat clinging to the charm with one paw while wielding its owner’s signature data knife in the other.

Here’s the full list of skins in the collection:

If you ever wondered what Revenant would look like with a beard, well, enjoy the nightmares.

In addition to Legend skins, the CAR SMG, Charge Rifle, Flatline, Hemlock, R301, and Wingman will be among the weapons getting premium event skins.

Like previous collections, the Raiders Collection Event will feature 24 new cosmetics for Legends and weapons alike. Collecting all 24 items will reward players with the newest Heirloom weapon to make a splashdown landing on Storm Point.

If you’re looking for something to really splurge on, Wattson’s spine-tingling new Energy Reader Heirloom weapon is hitting the event store along with the rest of the collection on December 7th, 2021.

With a design reminiscent of the motion trackers in the Alien franchise, the Energy Reader (technically called a Telemetry Resonance Module, based on its label) comes with an unexpected twist: instead of bringing Xenomorphs crashing down through the vents, the screen sometimes displays a pixelated Nessie plush with a nearby heart.

If the event trailer is to be believed, one of the rarer “examine weapon” animations will summon the fearsome Nessie herself, in the flesh. See for yourself above.

As always, a fresh set of bundles of previously-released cosmetics will hit the standard in-game store along with the Raiders Collection on December 7th. The first set of bundles will be available from December 7th to the 14th, while a second set will become available from the 14th to the 21st. If you’re still longing for Caustic’s The Killing Joke skin, Bangalore’s Killing Machine skin, or Lifeline’s Breach and Clear skin, now’s your chance.

Perhaps most exciting of all, the extremely popular, once-a-year limited-time mode known as the Winter Express will make its 3rd return to the series on December 7th, 2021 – but this year’s event adds a pretty big twist: for the first time, players will be able to choose their own loadout.

Previously, each Legend got a different, predetermined loadout that rotated each day. This often meant that characters whose abilities naturally thrive on the Winter Express (like Wattson and Caustic) often went overlooked on days when their loadout included that godawful Longbow-with-terrible-blue-scope combo.

While this change will likely be seen as a welcome one, the question remains as to whether players will still be able to change which character they play between rounds, as was previously the case, and added a fun twist to each match.

A bevy of updates will also hit Apex starting December 7th, and unlike the Winter Express, they’re sticking around like a well-aimed Arc Star.

Respawn will be reverting a change first made to Arc Stars during the Legacy update, which negated the slowing effect of being stuck with one. This is actually a good thing, as many players have complained about their squads getting taken out by an unintentional suicide-bomb via a squadmate running away from an enemy Arc Star while not realizing it’s actually stuck to them.

But like all good things, this comes with a price: due to the Arc Star’s increased accuracy compared to other ordnance, the reinstatement of the movement slow-down upon being stuck by one will be accompanied by a nerf to the overall damage of the stick. The Arc Star’s base damage for an on-body hit will be reduced from 30 damage to a measly 10. The base shield damage multiplier for sticking an enemy will be increased from 3x to 4x, but with the previous nerf, this “buff” is effectively a nerf as well, taking the base stick damage on shielded enemies down from 3x to 4x (from the current maximum of 90 shield damage per stick, down to 40). Note that this does not impact detonation damage.

In addition to these nerfs, when a non-stuck Arc Star detonates near you, the duration of the slowing effect will correspond to your distance from the Arc Star’s location (so if players are clipped by the outer edge of the detonation range, the slow effect won’t last nearly as long as if they were right next to it upon detonation.

Several minor bug-fixes are also being launched alongside the Raiders Collection Event. Ash, for instance, will now spray sparks instead of blood when shot, like her fellow synthetic teammates Revenant and Pathfinder.

For the full list of the changes coming to Apex Legends on December 7th, refer to their community post.

When Does the Apex Legends: Raiders Collection Event End?

The trailer indicates that, along with the Raiders Collection Event itself, the Winter Express LTM will come to a screeching halt on December 21st, 2021 though the beloved LTM has historically run through the new year. It may very well run that long this year, too, or Respawn may have more gifts hidden up their sleeves for the final week of 2021. Stay tuned to find out.

(And please, for the love of god, do not let Mirage drive the train. This author is still mourning the crash of the Mirage Voy’age, and we’ve all seen how that man handles a Trident.)