Apex Legends’ Bocek Bow Is The Real Star Of Season 9

Drop your Longbow for the strong-bow! 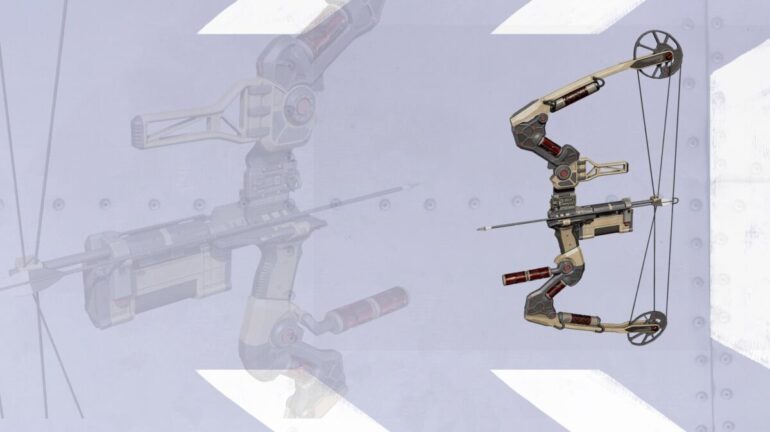 With all the wild changes to hit Apex Legends this season — including unfriendly alien plant life, a legend with a modified version of a familiar flying titan strapped to her back, and an entirely new 3v3 mode run by one of Titanfall 2’s most iconic bosses, Ash — it can be easy to miss the real star of the show: the Bocek compound bow, the newest weapon to hit the Outlands.

When it comes to the Bocek (pronounced bow-chek), there are plenty of pros and very few cons, even with the recent nerfs to ammo stack size and damage. The main benefits are fairly obvious: the Bocek requires no reloads, its arrows can be recovered from death boxes and walls alike, and it barely makes a sound when fired. Get lucky enough to snag the two attachable hop-ups, Deadeye’s Tempo and Shatter Caps, and you’re basically Katniss Everdeen in Space.

But there’s an even better reason to bring this bow to a gunfight: it adds a much-needed element of stealth to a game in which third-partying has become a consistent issue, usually due in part to the sheer volume of many of the weapons’ gunfire. If you’re reading this, you’ve probably been there yourself, but in case you haven’t, allow me to paint a picture for you:

You’re playing with randoms, because your real friends are asleep or don’t exist. One squadmate peels off and hot-drops on the other side of the map, kills 5 people, promptly gets downed and finished off by an enemy, then leaves the game after informing you what a terrible player you are — usually via some colorful language.

Your sole surviving squadmate lands the two of you in Autumn Estates (or as I like to call it, Skull Town: The Sequel) because they clearly want you to suffer for refusing to be jumpmaster. And to be fair, it’s what you deserve — this is what happens when you foist the pressure of being jumpmaster onto your teammates not once but twice, a round-robin of no, you do it until someone finally does it and then you’re wondering why the hell you let them do it.

The two of you somehow survive the initial in-your-face skirmish, probably because you were busy running around looking for a white shield instead of drawing attention to yourself with gunfire. Then you remember that since the last update, all players now land with level one shields already equipped.

You and your sole remaining squadmate eventually find weapons, and through a series of small miracles, you both make it to the top three in one piece. The ring has all of you penned in at the Solar Array, each squad on a different building’s rooftop. But even as the ring steadily forces you closer to the other teams, you manage to evade detection while the other two teams engage in a firefight. Peering out from whatever conveniently-placed crate you’re hiding behind, you watch the battle, waiting for one team or the other to win out and leave themselves vulnerable as they dig through the recently-deceased’s deathboxes.

But before any of that can happen, before anyone on either enemy team has even been downed, your idiot squadmate whips a Kraber out of nowhere and decides now is the perfect moment to attract everyone’s attention. Maybe they’ll get a hit, maybe not. But what they do get is both of you killed immediately, as all six members of the other two squads descend upon you like Flyers to an unlucky IMC grunt, immediately notified of your presence and location thanks to the deafening sound of Kraber fire. Even the sound of a Triple Take will send enemies scattering like ants, before quickly regrouping and heading right for the direction you were shooting from. If you’re outnumbered (or carrying the FNG), It’s rarely worth engaging unless you know you won’t miss your shots.

Your brilliant teammate, of course, misses their shots and gets downed immediately, and you’re left with the joy of making a split-second decision: Do I have time to revive this idiot, or should I go it alone? You’re injured, short one squadmate and pinched between two full squads, and if you’re somehow lucky enough to slip away as the other teams resume their battle, you rarely have enough time to heal yourself and revive your squadmate, especially if they’re stuck in the middle of the crossfire (but that’s what they get for landing you in Autumn Estates at the beginning of the match, obviously). Unless you’re Lifeline or Mirage, a quick and subtle revive is pretty difficult to pull off under these circumstances, and the moment one enemy team finishes off the other, you’re done for — usually because even if you did manage to pull off that revive, your teammate probably won’t have time to heal before the other team attacks.

Ah, the many joys of playing with randoms.

For players without a club or a premade squad of friends to team up and coordinate with via voice chat, this kind of match is a frustratingly regular occurrence. Another regular occurrence? Getting downed and taken out, then spectating as a squadmate runs in to snatch your banner card and dart off in the direction of the nearest respawn beacon (after looting your deathbox, of course). But before they can get to the beacon, your killer has caught up to them. There are audible footsteps behind and slightly to the left of your squadmate. They pull out their weapon, spinning around to the right and crouching, even as you hear the enemy still sneaking up on them from behind.

“Behind you! Turn around!” you holler into the mic, wondering how on earth you can hear better while spectating than they can while actually playing.

But it’s too late. A Mastiff fires once, twice, both times hitting your team mate, and you hear the familiar broken-dishes sound of their body shield finally giving up the ghost. It’s all downhill from there.

Obviously, some of this can just be chalked up to people who play using the speakers on their television or PC, or who wear low-quality earbuds instead of noise-cancelling, over-the-ear headphones. But a great contributor to both third-partying is the volume of most of the mid-to-long-range weapons. That’s where the Bocek comes in. The real game-changer here is its lack of noise. It is the anti-Kraber, and I love it.

The quick-firing, high headshot damage paired with the element of surprise the Bocek’s stealth-friendly whisper of a noise allows you to pull off cannot be overstated. Because it fires near-silently, it is absolutely deadly when paired with stealthier Legends like Bloodhound or Revenant. When utilized well, it can quickly turn the tide in your favor, even when the odds are stacked against you. While it may not quite have the range or damage, I’ll still pick this thing up over a Kraber any day.

And I’m happy to see it in action — even when I’m the target — because the Bocek’s lack of a deafening bang forces more players to turn off their Spotify playlist, stop yelling at their little brother about Fortnite, and pay attention to the game’s environmental cues. It’s a shiny new toy, glowing gold just like the rest of Olympus’s opulent, neo-Grecian decor, as though dropped into the Games by Apollo himself. With the Triple Take joining the Kraber in the drop pod “vault” this season, more players are opting for the Bocek for its accuracy and versatility in combat.

And that means the next time you’re sandwiched between two other squads, missing a teammate, or otherwise have the odds stacked against you, there’s a chance your randomly-selected team mate might have this silent beauty on them instead of an eardrum-bursting sniper. There’s also a chance they’ll actually hit their target. But even if they miss, it can be difficult to figure out who’s pelting you with arrows when you’re on the unfriendly end of the Bocek and the enemy combatant is well-hidden.

It punishes players who aren’t paying attention or listening for footsteps and flying arrows, which results in better match outcomes overall, regardless of which mode you’re playing. Those 105hp headshots are nothing to sneeze at, and it’s especially useful in Arenas, when a teammate has been downed and is screaming “ONE SHOT, THEY’RE ONE SHOT!” The ability to quietly knock 120hp off their attacker with two shots to the torso definitely comes in handy when said teammate is hellbent on engaging enemy squads at inopportune moments.

And for the lone wolf who wants to land on the other side of the planet and complain about getting downed and not immediately being rescued? Or the one who yells and blames the “terrible loot” even though you’re landing on a map full of loot replicators, and are now automatically equipped with a level 1 EVO shield & helmet, plus two shield cells and syringes already in your backpack? Or the one who blames their teammates for the fact that they ran headfirst into an ambush, completely outnumbered, and got themselves killed?

Pick up the Bocek and prove yourself. In the Arenas, there is nowhere to run, no third parties to blame, and Ash accepts no excuses.