Animal Crossing: New Horizons: What Does The Shower Booth Do?

Wash away the shame. 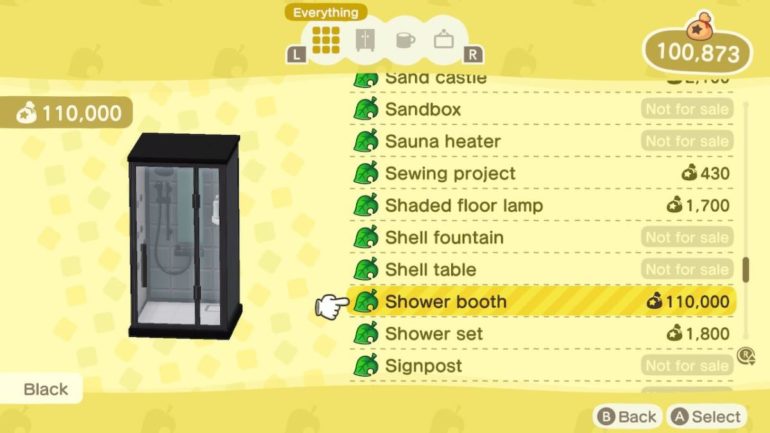 Animal Crossing: New Horizons has so many items to collect that it puts Argos to shame. If you want to customise your bathroom, you may have to check out the Shower Booth, though be warned that it isn’t exactly great value for money.

Available from Nook’s Cranny for a pretty staggering 110,000 bells, the Shower Booth in New Horizons is entirely ornamental. Compared to the baths you can buy, you can’t turn the water on or even slide the door open on the Shower Booth.

The Shower Booth in New Horizons is a very pricey item considering it doesn’t do anything. The Aluminum Briefcase costs a similar amount, though the fact that you can at least open and close the briefcase means it has some value.

If you want to buy another Shower Booth, you can go and buy one from the terminal in Resident Services. If you want different colours, you will unfortunately have to get lucky at Nook’s Cranny or trade with other players.

Need to earn a whole bunch of bells without much work? Take a read on how to predict your turnip prices throughout the week.

Animal Crossing: New Horizons released on March 20th exclusively for the Switch. From our review: