Animal Crossing: New Horizons: Where To Find The Katana 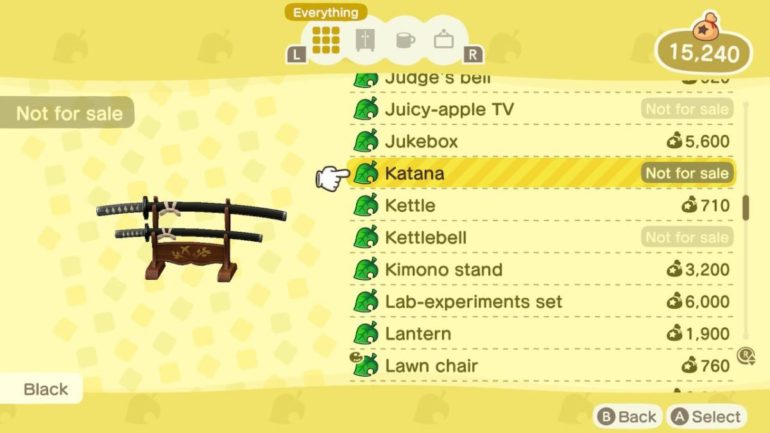 Animal Crossing: New Horizons is a pretty big game with a lot of stuff to acquire, so much stuff that you may never be able to collect it all even if you’ve played for hundreds of hours. One of the rarest and most sought after items in New Horizons is the katana, which you only technically have one chance to collect.

Every so often in New Horizons, Gulliver will wash up on your shoreline, presumably after being chucked overboard by his crew. After talking to him five times while he is incapacitated on the beach, he will wake up and then ask you to fetch him five communicator parts.

These communicator parts will always be found along your island’s shoreline, usually never that far from Gulliver himself. To spot them, look for what appears to be a spitting clam and then dig them up with your shovel.

Once you’ve done that, return them to Gulliver and he will then call his crewmates for a pickup. The next day, you will receive a gift in the post from him, which has a small chance of being a katana.

The katana item in New Horizons actually looks like two of them at once, two short swords on a plinth. It’s entirely ornamental and cannot be interacted with, so we recommend just placing it on top of something like a desk if you’re going for that Japanese aesthetic. Sadly, you cannot place the katana on a wall, but you can customise it.

You can sell it to Nook’s Cranny for a pretty terrible 2500 Bells. You cannot buy it from Nook’s Cranny, get given it as a gift by an islander, or find it in a balloon. The katana also cannot be repurchased from Nook Shopping, so be careful with the one you have.

Getting the katana is, unfortunately, entirely down to luck. Gulliver seems to work in cycles, giving gifts that are based on natural wonders and then hairstyles and other things, such as ornaments, which the katana falls under. Therefore, you may have to wait a very long time before you are able to acquire the katana from Gulliver.

If you’re desperate for the katana in New Horizons and don’t want to rely on the random nature of Gulliver’s rewards, you could always take to something like Nookazon to buy one from another member of the community instead. With the average price for the katana being 300,000 Bells, though, you may want to check your bank balance.

Animal Crossing: New Horizons, which is out now exclusively for Switch, is a game that will slice and dice away at your free time. From our review: