Animal Crossing: New Horizons, despite being rather a simple game, changes so much and so often that it can be hard to keep on top of it all. The start of a new month brings a whole host of new bugs and fish, one of the new fish for May being the rather lovely Angelfish.

Although, as Blathers might tell you when you go to donate the fish, it is actually a little bit of a bully to other fish. That’s not very angelic.

Here’s all the info you need to catch Angelfish in Animal Crossing: New Horizons. 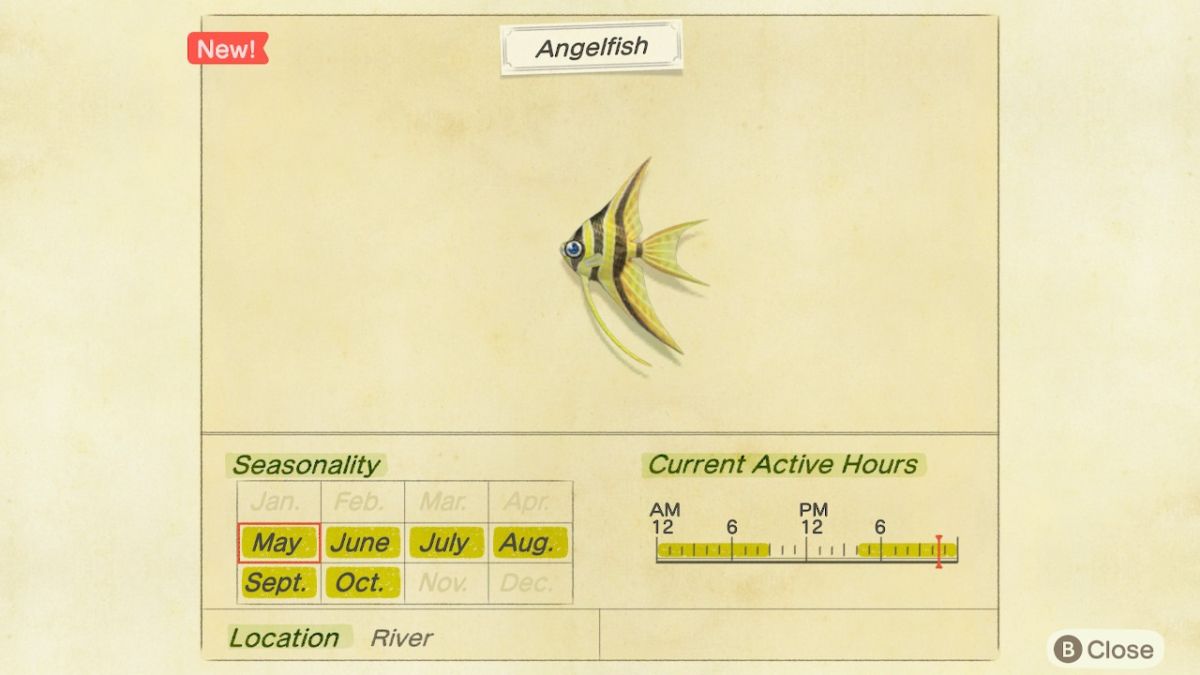 The Angelfish can be found in any of the rivers on your island. We managed to snag it in the river on a mystery island, though we know that more will also spawn on your own island.

As for what time of day they appear, the Angelfish are somewhat nocturnal and only appear between 4PM and 9AM. They are also somewhat rare, so you may have to burn the midnight oil to catch them.

As always, you will need at least a flimsy fishing rod to catch the fish. If you’re having trouble finding one, don’t forget to craft bait so more will spawn in front of you.

Once you’ve caught an Angelfish in New Horizons, don’t forget to turn it into Blathers at the museum to add it to his collection.

When you catch your second Angelfish, you can then sell it to Nook’s Cranny for 3000 Bells, making it one of the better small fish to get in New Horizons.

You can also hold onto it until C.J. arrives on your island, who will then buy it for 20% more than usual for a price of 3600 Bells. You can also give him three of them and he will give you an Angelfish model in return.

When Are Angelfish Available Until?

As with a lot of the critters added during May, the Angelfish will be yours to catch for quite a long time. The Angelfish is available in New Horizons from the start of May until the end of October, so you have loads of opportunities.

Animal Crossing: New Horizons, which is out now exclusively for Switch, is a great way to waste away your spare time. From our review: