Amazing Spider-Man #74: A Damp Squib of a Finale

No More Days of this troubled run. 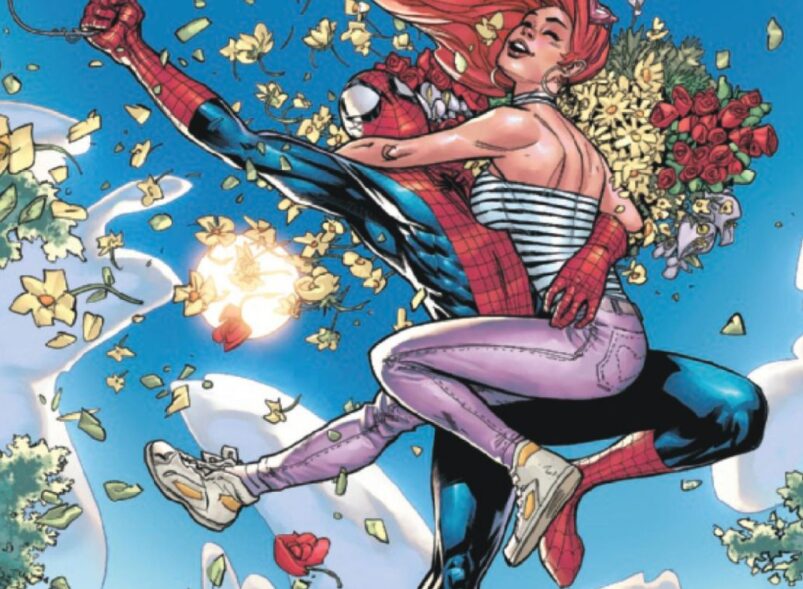 Nick Spencer has seemingly only had one real goal during his Spider-Man run, and that’s to retcon at least some of the worst stories that came before.

For a while, it looked like he was going to retcon One More Day, the one where Peter and MJ sell their marriage to the devil Mephisto, but then he suddenly took an out-of-left-field switch into retconning Sins Past instead. You know the one. The one everyone’s deliberately forgotten about for years, seeing as how it involves Gwen Stacy having an affair with creepy old man Norman Osborn and giving birth to rapidly-aging super-twins. Make no bones about it, Sins Past is a terrible story, full of inconsistencies and offensive characterizations and plot points that make no sense.

And with Amazing Spider-Man #74, the Spider-Man comics have indeed now outdone Sin Past — just not in the right way.

This finale is not a story, rather a lot of hastily strung-together retcons thrown together at once with no regard to whether they contradict each other or not. Let’s look at Kindred, the villain of the run. At first, he seemed to be a version of Harry Osborn who’d been to Hell. Then “he” was the Stacy twins, who turned out to be clones rather than the offspring of Norman and Gwen. Turns out Norman and Gwen never actually did it, Mysterio just hypnotized Norman into thinking they did. The logistics of that seem kind of NSFW, but what do I know.

The twins were either using Chameleon serum to look like Harry or they were controlled by an old A.I. of Harry, or possibly both? Then by #74, Kindred was just the Stacy twins. I think — I’m genuinely not sure. Harry himself appeared to be chained and tortured in Hell at around that point, after all, as Mephisto politely shows us.

Gwen Stacy herself is thankfully absent from this story. But the character assassination she suffered in Sins Past is here revisited a hundred times on Harry instead, whose villain days were long over in Spider-Man canon but are dragged up here for seemingly absolutely no reason whatsoever. We do learn that Norman – a now “sin-free” Norman – sold him to Mephisto as a child in exchange for power, which is about the only retcon in all this that’s at least interesting, but this plotline ends in what I can only describe as the most insulting way possible.

The ending of the story goes thusly: The Harry who’s been around since the One More Day era, whose existence seems to have been a terrible inconvenience to Spencer during all of this, is swiftly and coolly revealed to have been a Clone All Along. Marvel is so inconsistent on what clones are that honestly they could probably have swung that, except that Clone Harry is then immediately killed. How?

Well, Clone Harry learns that Norman, a man established over decades worth of Spider-Man lore to have been a cruel and abusive father, also sold his soul to the devil. Clone Harry – let’s just call him Harry, somehow that makes it less confusing – doesn’t overly react to this, then mere panels later he sees one of the Kindred(s) about to fatally impale Norman with a giant centipede. Harry takes the fatal blow for him while screaming the big “noooo”, and dies. His great heroic sacrifice, and possibly the thing that stops him from having to burn in Hell – or I’m pretty sure that’s the case, once more it’s confusing – is dying for the man who abused and belittled and on several occasions tried to kill him. Hand my pearls, I’m going to clutch them.

This is a terrible message to be sending. Harry, be he a clone or not, deserved better, but so would any other character written into that same position. Norman is insistent as all this plays out that he “always, always loved” Harry, and Spencer really seems to believe this, despite the fact that if you sell your child to the devil, it’s probably safe to categorically say you do not love them.

So, Spencer’s run is over and what’s really been achieved? We got a bit more clarification on Mephisto’s reason for wanting Peter and MJ apart (I won’t spoil it) which is something, but One More Day wasn’t actually retconned or even remembered by the people involved. One of the few things people actually grew to like about One More Day, Harry’s return and subsequent development, is now gone. Norman has gone from entertainingly evil supervillain to abuse apologist’s dream.

I know absolutely everybody wanted Sins Past retconned, and it’s nice to finally have it out of the way. But I have a feeling that in a few years this complicated saga is simply going to end up taking its slot on the “most infamous Spidey stories ever” list.