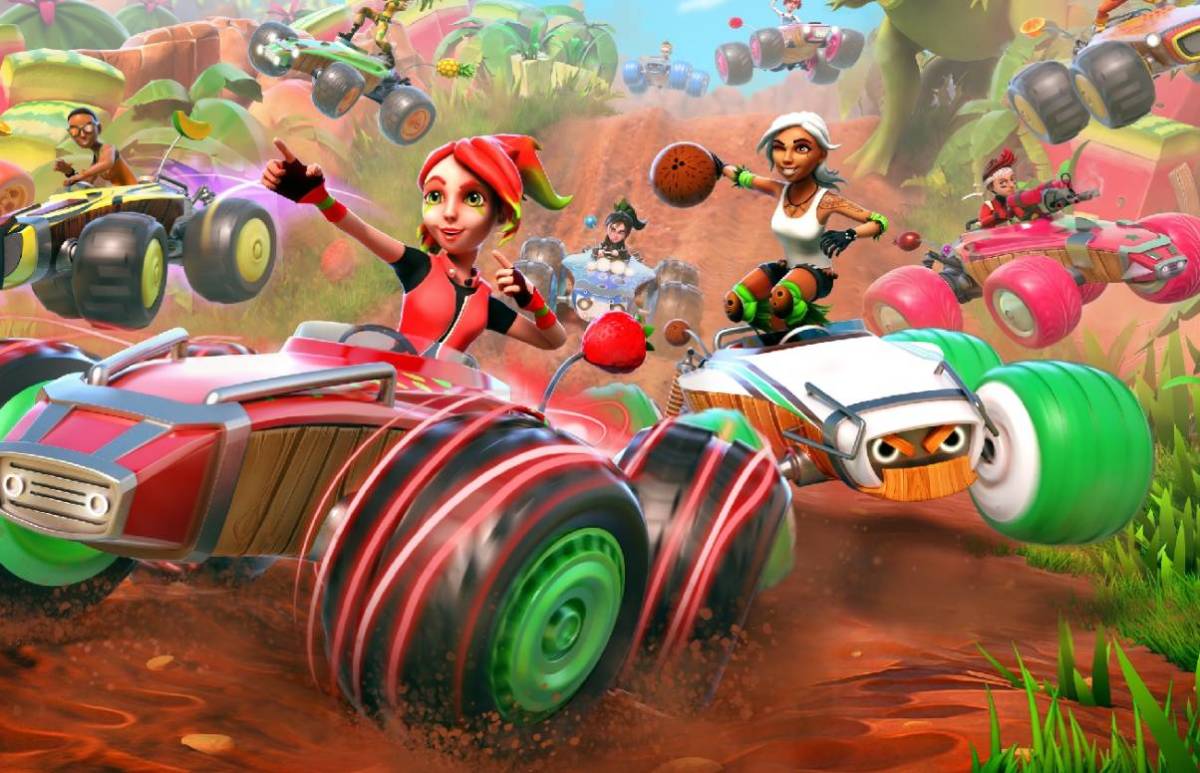 If you’ve seen the film Wreck-It Ralph, then you will no doubt be familiar with Sugar Rush, an arcade kart-racer based entirely around sweets, confectionary and all sorts (probably liquorice). Take away all of the sugary goodness, swap it for some natural, healthy fruit and you have All-Star Fruit Racing.

If you’ve ever played Mario Kart or one of its many clones over the years then you’ll know what to expect here: a handful of colourful characters and a variety of creative courses to race, drift and crash around. The 22 selectable characters each represent a different fruit that also determines the special move they can perform during the race – often related to the assigned fruit. The characters themselves, other than varying slightly in appearance, have little to no distinguishing features and use the same voices and victory/defeat animations making the choice come down to which move you want to do. 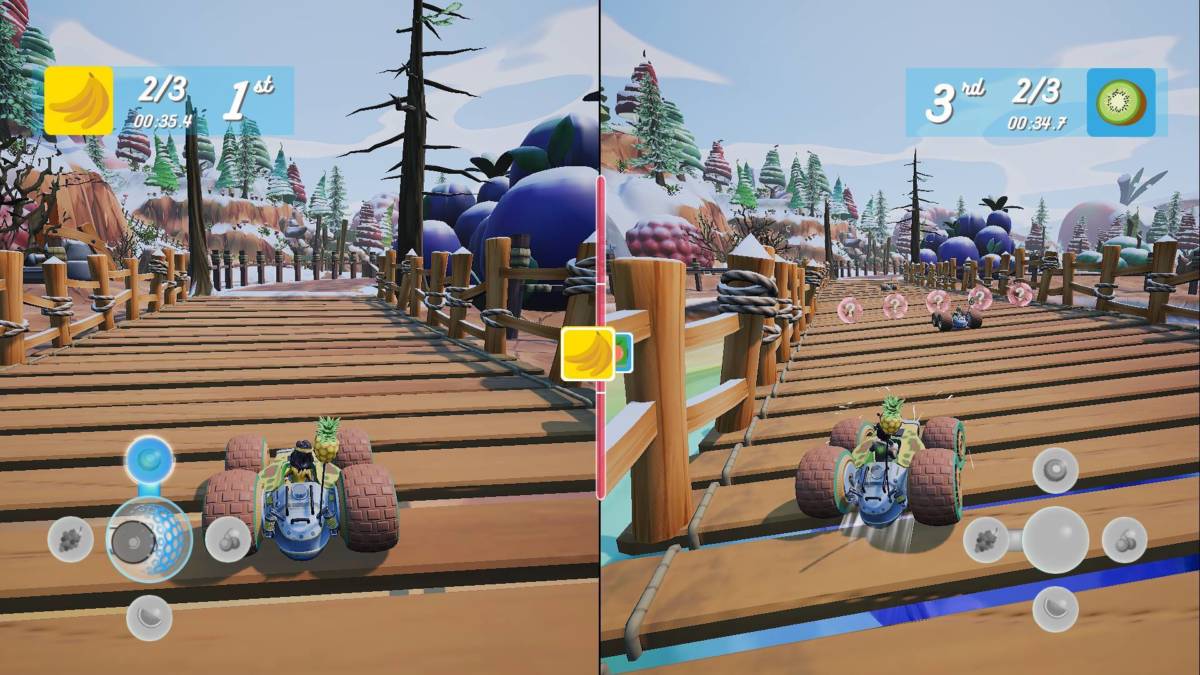 The tracks look beautiful and are as bright and vibrant as you would expect from a kart-racer. Unfortunately, they do tend to last too long with entire races sometimes consisting of 5 laps instead of the traditional 3 and not a lot going on to motivate the player throughout. Conversely, there are ‘drag race’ tracks which consist of only one lap and give a greater sense of urgency to the race that players should be familiar with from similar games.

Offline modes include Career (your standard Grand Prix mode with 11 cups to compete for), Fast Championship (throws together 3-5 random tracks in Grand Prix format), Custom Race/Championship (exhibition mode giving you control over which track, number of laps etc) and the Garage. It’s here that you can put your individual stamp on your kart by customising it with parts collected from winning races. These customisations are purely aesthetic but there is a huge range of bits and bobs to play with as well as dabbling with the colour schemes. 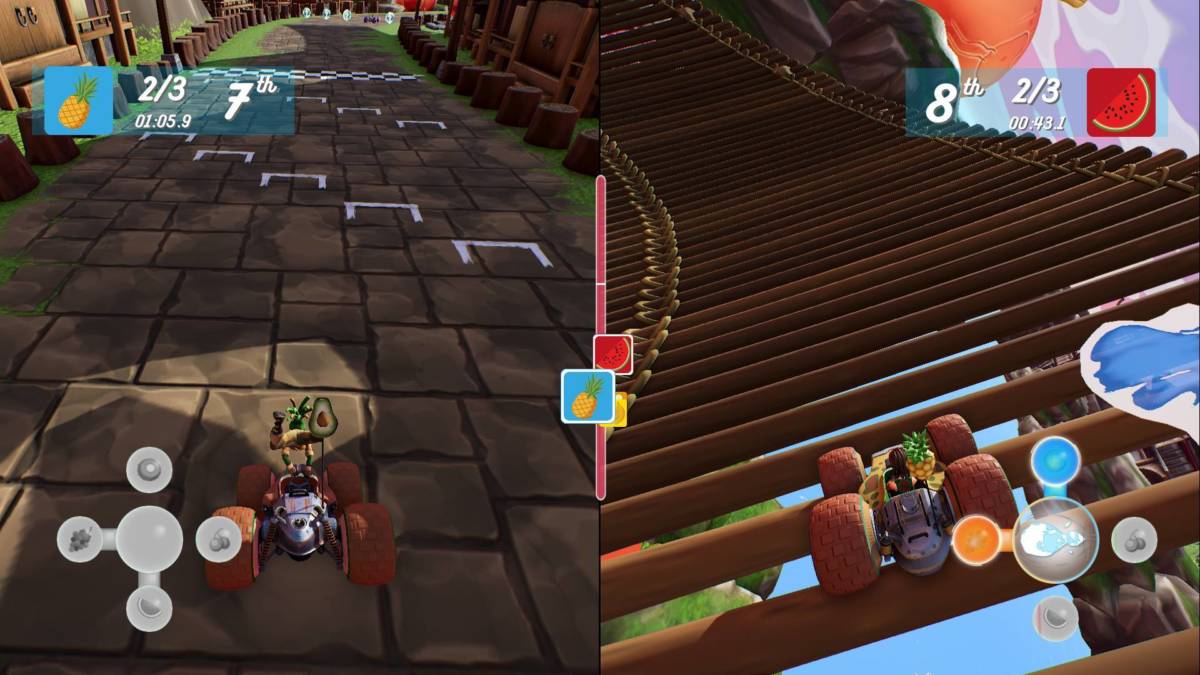 As with all kart-racers, multiplayer is where the main appeal lies. AFR offers multiplayer in both local and online flavours, although online wasn’t available at the time of writing. Local multiplayer offers up to 4-player split-screen action and certainly helps to up the ante by making the races seem more alive and consequential than in single player. The tracks can still drag on but luckily you can set the amount of laps before each race so it’s best to keep it at 3 or under to avoid boring your mates.

The tracks are very forgiving, collisions with walls don’t often set you back too far and should you come off the track completely, you’re back on before you can sip your smoothie. This helps AFR become incredibly accessible to younger or perhaps less experienced audiences. While a drifting mechanic is in place, it’s not always needed to secure 1st place but it certainly helps as the difficulty ramps up. Interestingly, AFR’s drifting can cause you to come a cropper should you hold that perfect slide for too long, as your kart’s engine overheats causing you to stall for a second or two. You can only assume this is to prevent experienced players from literally running circles around their less savvy opponents with drifting and keeping the game more balanced overall. The accessibility of the game allows it to be picked up and played instantly. The handling of the kart doesn’t change depending on your choice of character so it’s easy for players to find their groove and focus on which special attack suits them best. 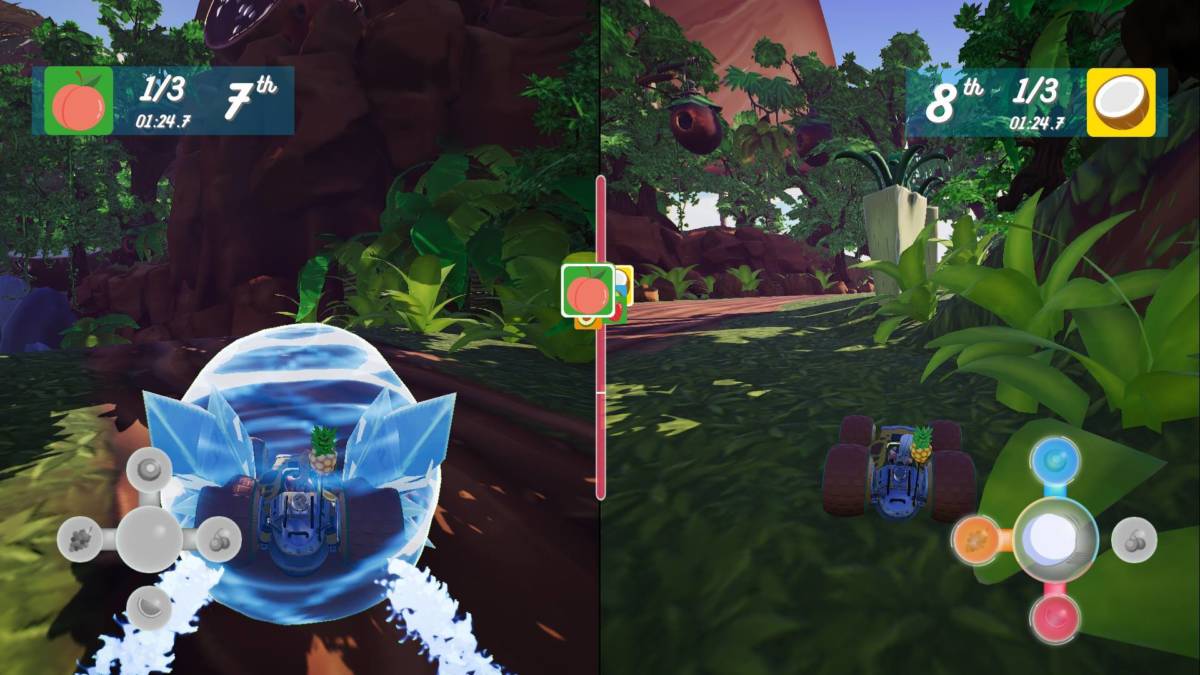 Weapons are present, but in a way you may not be used to. There are 4 main fruits to collect throughout each track that fill up corresponding metres of your ‘juicer’. Which one you fill first affects which type of power-up you’re able to use. Fill up two or more and more powerful, different combinations of moves are unleashed. Fill up all four and you gain access to your chosen characters special skill ranging from pineapple rockets to coconut bowling balls. It’s certainly a fresh take on the weapons systems we’re all familiar with, but you’ll often rely on filling all your metres for the special move as they’re fairly easy to top up. Oddly, depending on the course, this system gets traded out for a more traditional system where each pick-up randomly generates a weapon and away you go. Yes, the collecting different fruits system is slightly convoluted, especially for a game that aims to be as accessible as it can, but when the effort has gone into including this (as well as a helpful tutorial for it) it seems a rather bizarre choice to not have it as your only system.

What AFR suffers from the most is the absence of urgency in the races. You never feel like you’re hitting top speed, even when using boosts on the tracks. On one hand, it’s nice to have the time to soak in the scenery of the tracks, but on the other, it’d be better to have them blur past as you burn rubber.

This is where AFR struggles. It is a great take on a tried and tested genre but suffers from an identity crisis and loses focus on what makes this genre so much fun. The tracks are stunning but lack enough character. The weapon system is interesting but not fully developed. The characters have potential but are essentially cut and paste. There’s an overall unfinished feel to the game. It’s glaringly obvious that AFR is designed to appeal to kids with its bright, cartoony visuals while also promoting a healthy diet and make fruit seem cool (which it is and you should definitely eat more fruit, kids). Whereas Mario Kart has honed its gameplay over 20-odd years and will never be topped, AFR doesn’t carve out enough of its own identity to ever be considered either a challenger or an equal to the likes of Sonic and Sega All-Stars and Crash Team Racing.

Verdict
All-Star Fruit Racer is a bold attempt at making a name for itself in an oversaturated genre. Unfortunately, the lack of focus on delivering a consistent product has left AFR a little under-ripe and could have done with a bit more time to develop. Microtransactions: none
5