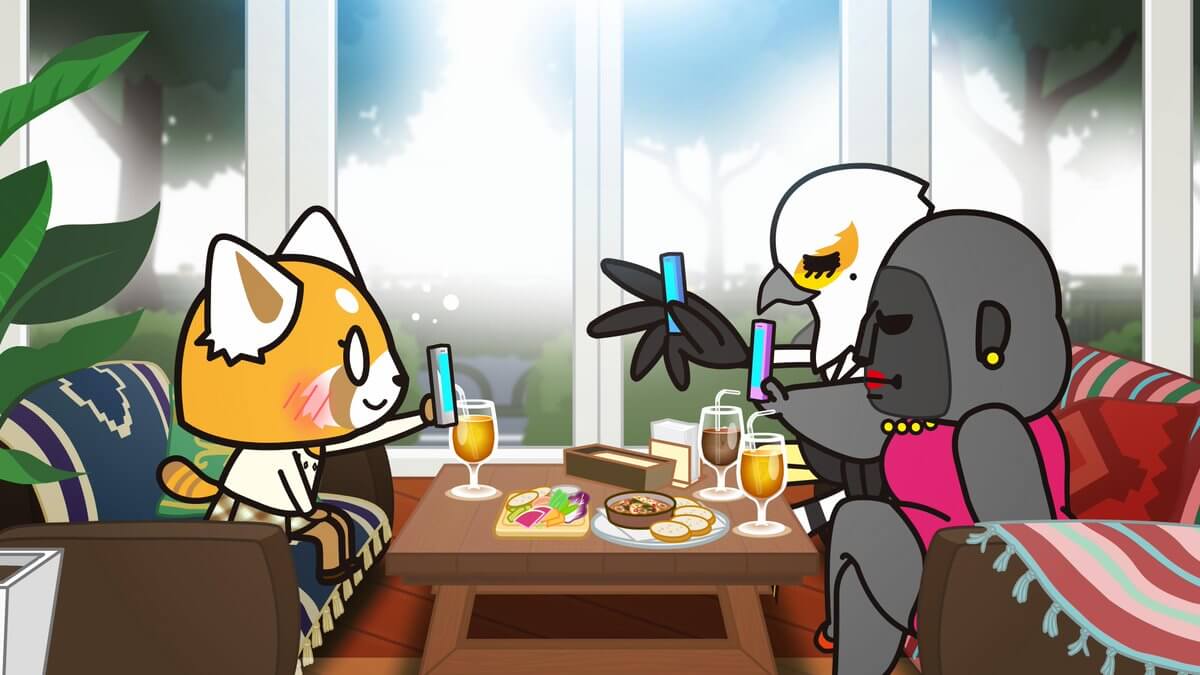 Sanrio are typically known for cutesy mascots like Hello Kitty. However, there is one black sheep to their family – specifically, a little red Panda. When Aggretsuko first hit Netflix in 2018, it was very well received by the public, sitting comfortably at 100% on Rotten Tomatoes. So, when the second season was released in June 2019, fans everywhere were hyped. How does it hold up by comparison? Pretty much the same.

The trials of metalhead Retsuko continue. While she continues to struggle with the problems of adulthood, she encounters new issues: a new start at her work she has to train, an overbearing mother who starts matchmaking for her against her wishes. But despite all these crushing her, there are things she is looking forward to: taking driving lessons, organising a holiday with her friends, as well as a new man called Tadano who she very quickly grows interested in. Could this be the man of her dreams?

Despite having a similar character design, Aggretsuko and other properties owned by Sanrio – like Hello Kitty – are as different as chalk and cheese. Though the show is rated PG, it aims for the late teen/early adult demographic. Considering Retsuko is an office worker in her twenties and most of the story is told from her perspective, there is a huge portion of the audience who will relate to this. The show also tries to go for other demographics: Gori, a marketing director in her 40’s, reflects on how she was terrified of the prospects of getting older at Retsuko’s age, but enjoys it more than she expected. Additionally, Kabae, one of Retsuko’s co-workers, comforts Retsuko about her marriage doubts by telling her how she never expected to be a mother, despite fitting perfectly into the role now. In contrast, Director Ton also reflects on his family life, telling Retsuko despite them driving him nuts, he wouldn’t know what he would do without them. It’s nice to see the show stretch out in these directions.

Much of Aggretsuko’s original cast stays the same, with only two of the first season characters – Tsubone and Komiya – taking a backseat in this season. The show continues to give more depth to the other characters, like Kabae being a sweet and caring mother, Washimi being divorced etc. As previously mentioned, each of these character’s traits help shape Retsuko’s own perception of her world and how she should face her problems, as well as giving more personality to these characters outside of their cardboard cut-out stereotypes. There are also many new characters, like Retsuko’s mother and Tadano. Though these characters are quickly introduced into the show – and in some cases, just as quickly exit – this doesn’t feel out of place and fits in perfectly with the show’s tone. Also, will the character of EIN-O make a reappearance in future seasons to shape Retsuko’s life for the worse, considering he is a piece of tech designed to make jobs like Retsuko’s obsolete? May be something to keep an eye on.

The comedy varies greatly, especially in terms of subtlety. One of the more hilarious, in-your-face moments is that Ton’s twin girls and wife have the same character model and are voiced by the same voice actor. The character of Anai clearly is meant to represent the over-sensitive snowflakes of the world: coming straight in from university, lashing out at his colleagues over email when they say or do the wrong thing to him, and literally having to be parented by Kabae before he truly fits in. Even though it was a funny gag, it was pretty on the nose.

Some of the jokes are way more subtle though: one of the characters who is a techno geek appears on a magazine cover holding an apple. The character designs continue to reflect their nature, like Tadano being a donkey representing his stubborn nature. Though most of the comedy is visual, some of it is done in dialogue like Retsuko being cut off before she swears. Retsuko’s metal portions still continue to be well timed pieces of comedy gold, though they seem to take a little bit more of a backseat in this season

However, for all its strengths, season two of Aggretsuko feels like a paint-by-numbers of the first’s narrative structure: Retsuko encounters a bunch of problems that get resolved over the course of a couple of episodes before focusing on a romantic story arc. Though the different situations Retsuko finds herself in continue to serve well for comedy purposes, the plot as a whole isn’t anything brand new.

Each of the episodes have been extended in running time, going from fifteen minutes to the typical anime run time of twenty minutes, despite still keeping the episode count to ten. It’s great that this show is getting more time to put in content while still keeping its short and sweet nature.

This season of Aggretsuko is still worth watching for the same reasons as the first one: relatable humour, pleasant to watch in its simplicity, and the definition of a bingeworthy show. However, if future seasons continue to follow the same plot structurally each season, it may stagnate and get boring. However, as for the second season, it still has much of the same charm as its predecessor and is three hours of fun, a perfect distraction from the drudgery of life.

Verdict
Aggretsuko is the same bingeworthy animated comedy that’ll appeal to young adults everywhere, even if it doesn’t really do anything new.
8.5
Cultured Vultures is a pop culture website established in 2013 covering all things gaming, movies, and more. We eat your words.
All The News On The Biggest Games