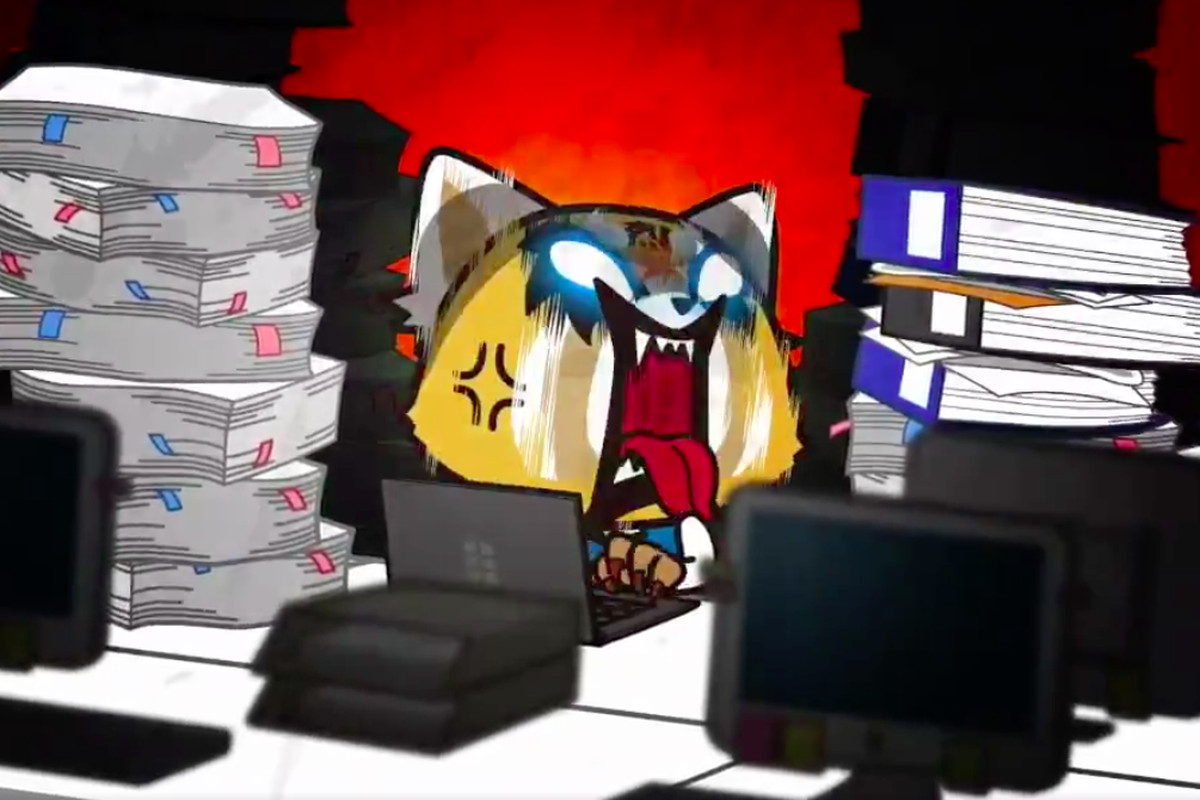 We all have our vices, our solutions for getting through frustrating moments of our life, whether we are in work or education. Some of us drink, others smoke, perhaps we work out to unwind after a long day. But how many of us can say singing Death Metal at a karaoke bar is our way of coping through life? Well, that’s the premise of the Netflix Original anime show Aggretsuko or ‘Aggressive Retsuko’.

The show follows our protagonist Retsuko, an anthropomorphic red panda who works in the accounting department of a Japanese trading firm. The first episode opens up at with a twenty-year-old Retsuko, recently graduated, bright eyed and looking forward to her future in business. Fast forward five years, her work life seems to have taken a turn for the worst. Between her chauvinistic boss, mountains of work, and her annoying co-workers, it’s a frustrating and thankless job.

Her solution? Find a quiet spot in work or – as previously mentioned – go to a karaoke bar at the end of her work day and sing Death Metal. Each episode covers Retsuko’s latest issue, with her bosses dealing her personal blow after blow and her colleagues commenting on how she can handle it so well. The episodes range from Retsuko being embarrassed on a staff night out by her manager to thinking she may have found true love with a guy in another department of the firm.

The first thing you’ll notice about the show is that it’s not done in the style of traditional anime, but rather following more of a cutesy design. That’s because the mascot company Sanrio is responsible for these characters. If the name sounds familiar, that’s because they were same people who were responsible for icons such as Hello Kitty. However, this Netflix original is quite a contrast compared to the kid-friendly characters Sanrio is known for. The colourful design of the characters is where the child-friendliness ends, making way for more adult-oriented dialogue.

A good portion of the comedy comes from the relatability. You have the pushy boss who does nothing but play golf, you have the office worker who has a crush on Retsuko, the back-stabbing frenemy who sucks up to her superior, the absolute boss of a colleague you look up to, the guru of social media who studies other people’s habits, and the office gossip. This makes for some genuinely funny interactions with our protagonist, who fits into the stereotype of the responsible colleague who does everything in their power to finish their work.

Not all the comedy is just done through commentary on work culture though. Another way the comedy works in this show is with the character designs: the manager is portrayed as a pig, literally playing off the term ‘Chauvinist Pig’, her supervisor is an anthropomorphic snake, and Retsuko being a red panda, a usually docile animal, contrasts greatly when she has her moments of rage. It took me to realize that the secretary character is actually a Secretary bird. Something to additionally note is that all these characters are not one-dimensional. Though a good portion of the comedy comes from the stereotypes they portray, the characters usually have another side of them that we’ll occasionally see, which is a nice little touch. You also can’t help but laugh when Retsuko goes into death metal mode, all the lyrics are her getting her emotions out instead of an actual song.

Now, should fans watch in subbed or dubbed? Either format works fine on its own, though admittedly the Death Metal parts work better in the dub. In both, it’s hilarious to watch a sweet sounding female voice be replaced with the vocals of a demon. An interesting little piece of trivia is that the director of the show, Rarecho, actually does the metal vocals in the subbed version. The show is also actually an adaptation: the original Aggretsuko – which was also directed by Rarecho – is one hundred episodes of minute long shorts. Though they were funny in their own right as well and are still worth a watch, the longer more-story driven episodes of the Netflix show are more characterized, it’s a lot more cleverly done, and hits harder at more realities than the shorts ever could.

The only negative aspect of the show – if there really is one – is that narratively, we are left with a cliffhanger: Retsuko is still in the same position as when we met her in the first episode, still being terrorized by the higher-ups of her workplace and still doing little to nothing about it. While this isn’t a huge personal issue, it would have been nice to see Retsuko’s story arc conclude in a satisfying way: maybe she finally climbs through the ranks of her job, or perhaps she finally gets the courage to go to a new job. It’s a small issue, but one that I still think needs to be addressed.

All in all, this show has something for everyone. I think any of us who are working will find something relatable in Retsuko’s frustrations and is a comedically exaggerated reflection of our society, all told through the eyes of chibi animals. But you don’t have to be living the postgraduate work life to enjoy what this anime has to offer. This show is short and sweet, with only ten episodes which last fifteen minutes each.

Verdict
Even though the show leaves in pretty much the same place as it started, it is still a must-watch. So, if you want something to take your mind away from the daily grind, this is a show you should absolutely be watching.
9
Cultured Vultures is a pop culture website established in 2013 covering all things gaming, movies, and more. We eat your words.
All The News On The Biggest Games