AEW Understand The Importance Of Acceptance And Inclusiveness

The burgeoning promotion made great strides in their first event to make sure everyone would feel welcome. 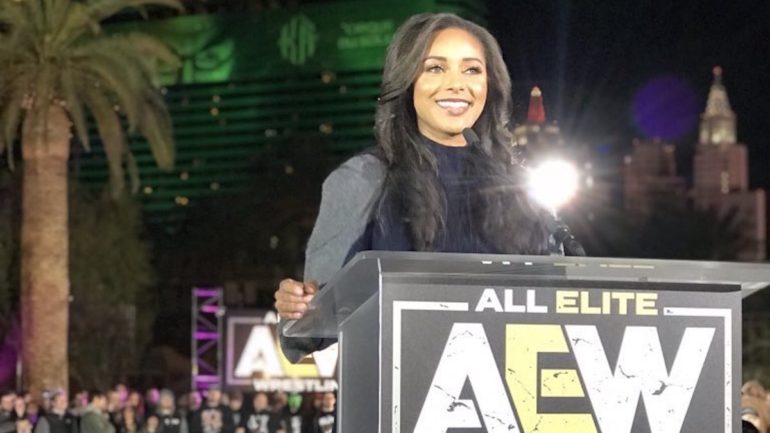 It’s safe to say that All Elite Wrestling delivered on their promise to give fans a night to remember with their inaugural event; Double or Nothing featured a similar variety show-type feel as All In. While the latter wasn’t officially an AEW event, it served as the blueprint for the eventual powerhouse promotion that The Elite and Tony Khan would spearhead. Want an athletic showcase with plenty of insane spots? There’s the Young Bucks vs. The Lucha Brothers. Or maybe you’re more inclined to story-driven throwbacks? That’s cool, Cody vs. Dustin Rhodes is there.

Great wrestling is only a small part of it, though. Any company can book a series of strong matches if they have the talent. The key to having a stellar reputation is the overall package, from the presentation to the transparency of how you operate. WWE has fallen under harsh criticism for its current dealings, notably the controversial agreement with Saudi Arabia to put on super shows. AEW knows they must not only be different, but better.

It means the world to me to know that a major wrestling promotion takes inclusiveness seriously. Whether it’s in relation to disability, race, gender, or sexual orientation, making a concerted effort to break down barriers that the industry has put up bodes well for the future. I look at competitors such as Dustin Thomas, Sonny Kiss and Nyla Rose and I see a genuine desire to showcase people who may not be given a shot elsewhere. AEW wants to treat its performers and fans from all walks of life with the respect they feel they’re owed.

If there was one thing that caught my attention more than anything with Double or Nothing, it was that it was the first ever sensory inclusive wrestling show. When Brandi Rhodes made that announcement at the top of the night, some people watching at home may have been scratching their heads. It wasn’t fully elaborated on as the fans in attendance were eager to see some wrestling. And, of course, the event was beholden to pay-per-view timings. It’s not exactly the ideal environment to talk at length about the ins and outs of your event planning. That’s what podcasts are for. I was still intrigued, however, as the subject of inclusion for non-neurotypical people is one I am passionate about.

As a lifelong autistic wrestling fan, I’ve had a real apprehension when it comes to attending events with crowds. I’m only 40 minutes away from London and have never been to a PROGRESS show, for example. The UK independent scene is thriving and there are autistic wrestling fans up and down the country who don’t feel comfortable sharing their passion with others.

This is a problem. A problem that AEW realised they could play a part in solving. Brandi Rhodes has been outspoken in her beliefs of diversity and inclusiveness. AEW’s mission statement has been that wrestling is for everyone since they started. To the cynical, it’s a company that looks like a group of jaded ex-WWE guys who want to stick it to Vince McMahon. It’s a shallow perspective to have when we’re looking at a promotion that genuinely wants to inspire change. They’re not just talking about changing the world, they’re doing it.

The sensory inclusive nature of Double or Nothing was first detailed in a Reddit post from user blackdragon8577 in r/SquaredCircle. AEW teamed up with KultureCity, an organisation dedicated to the acceptance and normalisation of autism in the United States. They understand that not all disabilities are visible, and that the mental demands autism can have on a person are heavily taxing at times.

At the event, bags were handed out to fans who needed them, containing items that were tailored for autistic fans in attendance. Included were high quality ear defenders, fidget toys (for people becoming restless who need some form of distraction/stimulation), cue cards for non-verbal communication, and a lanyard identifying attendees who may need help. While these packs are normally sold for $25, they were completely free upon request. On top of this, venue staff were trained in how to help fans who may be overwhelmed by the experience.

When you’re in a crowded room that is filled with loud noises and bright lights, it can set off all kinds of alarm bells for people prone to sensory overload. These can lead to rather severe consequences. In my own experience, I’ve been subject to freezing up with crippling anxiety, panic attacks, and even depressive episodes in the following hours. The inability to process such vast and intrusive information can pose a serious risk to autistic people — for AEW to provide such support is a step above what any of their contemporaries are doing.

There was also a separate room in the venue with comfortable seating, less harsh lighting and lowered noise levels to enjoy the show in. Ticket holders simply had to register beforehand, and they’d be able to be escorted to the room if necessary. There, those with sensory issues would be able to watch the show in peace and could feel looked after. Creating such a safe, welcoming environment for a significant portion of fans who are usually ignored is a step that not even the market leaders are currently taking. WWE have only worked out that women’s wrestling is a marketable commodity in the last four years. They’re seemingly years away from looking after fans who are scared to go to their live shows.

The mere anxiety of potentially attending a wrestling event has put me off in the past. And I’m sure it’s the same for many fellow autistic fans. To know there’s a company out there that wants to break down the barriers of exclusion and be accepting of those with certain needs is a major statement. AEW aren’t doing this retroactively. They’re not trying to change their brand identity in reaction to pressure from outside groups. They’ve made a conscious decision to help people from the very beginning. They are telling the world that they are a modern company who want to give wrestling back to those who support them. Wrestling is for everyone, and AEW is definitely for me.