It's Pride Month and the book front is glowing. 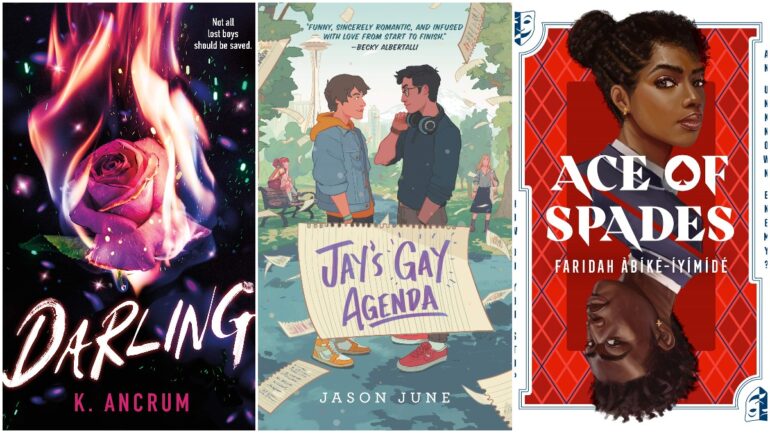 It’s Pride Month and you know what that means – I’m going to be beating the drum for queer books even more than I usually do. We’re kicking things off with some YA LGBTQ+ books, rounding up some of the new titles that you can read or pre-order ready for your summer reading. The harvest is looking bountiful, so strap in.

Ace of Spades is one of the most anticipated YA books of the year, and the wait for it is almost over. Described as Get Out meets Gossip Girl, this is a thriller set in a private high-school where an anonymous texter is busy spilling secrets.

As well as containing characters who identify as gay and queer, Ace of Spades takes a powerful swing at institutionalised racism, and the mystery will keep you on the edge of your seat right up until the end. Comparisons have been made to Angie Thomas, and you just know that means we are onto a good thing.

Ancrum already has two great books under her belt; The Wicker King and The Weight Of Stars, so hopes are high for Darling, in which Peter Pan has been reimagined as a super diverse, queer thriller set in Chicago. This is possibly the dark YA LGBTQ+ book of your dreams.

On her first night in the city, Wendy Darling meets a beautiful boy named Peter who whisks her away into an underground world full of dark secrets. Early reviewers are yelling about the twists and turns, the breath-taking apprehension of the story and – of course – the great representation.

A little bit The Secret Garden, with Greek mythology vibes and a whole lot of magic, people are really looking forwards to This Poison Heart, from the author of the very well-received Cinderella Is Dead. People are already loving the casual and effortless diversity of this book, woven into what is just looking to be a great urban fantasy yarn.

All her life, Brieseis has had a strange affinity with plants; even the ones that are meant to be dangerous seem to pose no threat to her. When she inherits an estate from an aunt she has never met, Bri and her adoptive parents go to spend the summer there and find out that her biological family have left her a whole lot of secrets going all the way back to ancient times – and the plants are at the centre of it all.

Tanya Bryne is a reliable pair of hands when it comes to YA, and Afterlove is surely one of the most anticipated YA LGBTQ+ books of the year.

After a car crash, Ash is invited to be a reaper – someone who goes around collecting the souls of the dead. But for Ash, the priority is just to see Poppy, her first love, even if it is only for a little while. The fact that Ash is dead could pose a bit of a problem, of course. If you’ve ever found yourself wanting to read about sapphic grim reapers, then Byrne has you covered.

5. Some Girls Do – Jennifer Dugan

Dugan’s Hot Dog Girl was a super fun, fluffy YA romance, so hopes were high for Some Girls Do, a love story between an openly gay teen running star and a closeted, bisexual beauty queen who is a dab hand at mending cars.

Readers have not been disappointed, raving about the immersive story and the realness of the characters. Dugan is funny and so are her characters, but Some Girls Do also deals with important issues facing LGBTQ+ teens when they come out – or when they don’t want to, or aren’t ready to let the world know their truth.

The Witch King is shaping up to be the queer fantasy of the summer if your thing includes witches, faes, arranged marriage, the friends-to-enemies-to lovers trope, or a fierce anti-fascist message. And let’s be real – is there anyone to whom those things don’t sound awesome?

Wyatt is our trans witch, who was once engaged to be married to his best friend, the fae prince, Emyr. When Wyatt lost control of his magic, he went to the human world to escape. But now Emyr has found him and is not planning on dissolving the engagement, despite Wyatt’s transition. As Wyatt gets to know the Emyr once more, the boy he once loved, he has to decide between his own freedom and that of his people.

Spencer is a trans teen who has just transferred to a new school to escape the bullies who made his life hell after his transition. No one at the new school knows he is trans, and things are looking up until his place on the soccer team is rescinded by the F on his birth certificate.

The plight of trans athletes is in the news a lot lately, as they fight for the right to be allowed to compete with cis peers. With that in mind, a YA LGBTQ+ novel like The Passing Playbook is remarkably current, and probably a vital read.

Jay Collier is the only out gay kid in his small town, and he spends his time dreaming of when he will finally be able to tick some things off his romance checklist – the things that his straight friends have been able to do for ages. When his family moves to Seattle, Jay finds a buzzing LGBTQ+ scene and finds himself torn between his old friends and his new horizons.

This book is funny and sex-positive. Jay isn’t perfect, in just the way that no teen is perfect, and his messy exploration of the brand-new community he finds feels so honest and true.

9. Cheer Up: Love And Pompoms – Crystal Frasier and Val Wise

If graphic novels are more your thing, then Cheer Up is the summer read for you. Wise’s illustrations are vibrant and super cute, perfect for this tale of Annie and BeeBee, former friends brought together by the cheerleader squad they both have to join in their senior year.

This sweet friends-to-enemies-to-lovers tale deals with microaggression and peer pressure, but ultimately it is promising to be a joyful, fluffy love story as two girls who thought that they’d seen the end of their friendship discover that there might still be something there after all.

The last YA LGBTQ+ rec for today is a novel about coming out, finding yourself, and living your best, most authentic life. Jules is a teen with a plan; graduate and get out of Texas, where he knows he isn’t living his best life. When Jules accidentally outs himself on Twitter, the plan goes out of the window completely – and Jules has to learn to live as his true self.

His Twitter crush, Mat, makes Jules feel as though he can take the world head on – but Mat is fifteen hundred miles away in LA, and Jules is living through his accidental coming out all by himself. Early reviewers are loving the true to life long-distance love story, and how despite the challenges, this is a happy and fun book.

READ NEXT: 12 Best True Crime Books You Should Read