There is little better than a brilliant true crime book. 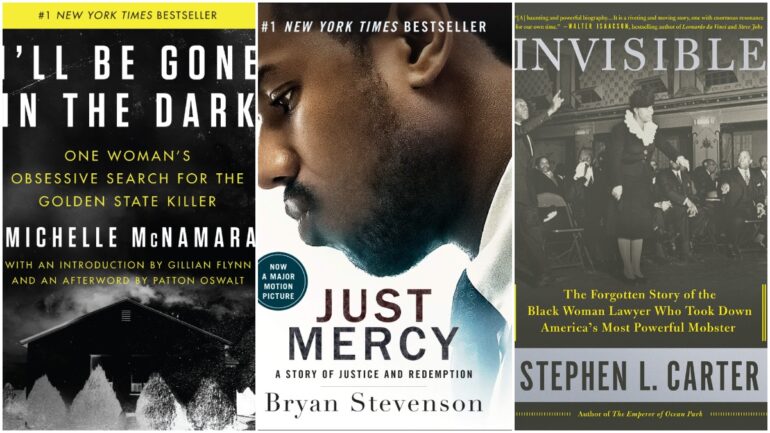 If the memes are anything to go by, a lot of people in lockdown over the past year have spent their time listening to true crime podcasts, or watching some of the endless true crime content that Netflix likes to provide us with. True crime is endlessly fascinating to us, in whatever format it comes – and often the most immersive experience can be found in the best true crime books out there. So many podcasts and TV shows take their content from these books anyway that you can get a lot more out of the stories by just visiting the books themselves. In this article, we’ve rounded up some of the best true crime books to give you some ideas with where to start with your reading in the genre.

Helter Skelter is literally the all-time bestseller of true crime books, so it’s as good a place as any to begin. Vincent Bugilosi was the prosecutor in the Manson murders case, so it is hard to think of anyone better placed to tell this story.

In August 1969, six people were murdered in Los Angeles by members of the ‘Manson Family’, the cult lead by Charles Manson. Bugilosi and his co-author explore every facet of the murders and what lead up to them, as well as what came afterwards. They tell a frankly riveting story.

2. Invisible: The Forgotten Story of the Black Woman Lawyer Who Took Down America’s Most Powerful Mobster – Stephen L. Carter

Stephen L. Carter tells the story of Eunice Hunton Carter, his grandmother, who was an absolutely extraordinary presence in 1930s New York. A black woman, the granddaughter of slaves, Carter was key in the takedown of Lucky Luciano, the father of modern organised crime in the United States. She literally built the case and the strategy that allowed the district attorney to charge Luciano.

Too often, the contribution of women in history – especially women of colour – is erased from the records. But Stephen Hunter sets this injustice straight for his grandmother, and tells a great story while he does it.

When it comes to talking about the best true crime books, it’s important to remember that no matter how good the story may be, there are real people behind every page. No true crime book needs this reminder more than one about a school shooting, and Columbine is no different. Luckily, author Dave Cullen treats this subject with grace and sensitivity. The reader is in safe hands here.

Columbine, a school shooting in which 13 people died, was the deadliest event of its kind in 1999. Cullen examines the events of that terrible day; the lead up, the police response, and the agonising aftermath.

This is the book that inspired the Netflix series, Mindhunter, and if you haven’t yet got around to checking out the book, I would highly recommend it.

John Douglas is the man who probably knows serial killers better than anyone else. He literally invented criminal profiling, the idea that by analysing the nature of the crimes, you will come to understand the people who committed them more fully. It sounded crazy back in the day, but the behavioural science taskforce in the FBI is today one of the most elite in the organisation.

5. Tinderbox: The Untold Story of the Up Stairs Lounge Fire and the Rise of Gay Liberation – Robert W. Fieseler

Before the horrifying Orlando club shooting in 2016, the biggest mass murder of gay people in the USA took place in New Orleans in 1973, when a fire at the Up Stairs Lounge claimed the lives of 31 men and 1 woman. This little-known event is brought to life in Fieseler’s gripping book.

The fire, deliberately set, was a watershed moment in LGBT history. There was horror in the aftermath, when families were ashamed to claim victims or the church refused burial rights, but out of the ashes came a galvanised force for good.

6. The Fact Of A Body – Alex Marzano-Lesnevich

When they were a law student, Marzano-Lesnevich was working on the death-row hearing for murderer and child molester Ricky Langley. They found, getting deep into the case, that something in Langley’s story was disturbingly familiar to them.

The Fact Of A Body is part memoir, part true crime, and completely compelling either way. Marzano-Lesnevich uncompromisingly reveals layer upon layer of not only Langley’s story but also their own. On this list, this is the book that shows best how complicated the truth can be.

7. I’ll Be Gone In The Dark: One Woman’s Obsessive Search For The Golden State Killer – Michelle McNamara

This is by far one of the most popular and best true crime books on this list. The Golden State Killer, a serial rapist and murderer who stalked suburban San Francisco for ten years in the late 70s and early 80s, is one of the USA’s most notorious killers. Joseph James DeAngelo, the man finally identified as the killer, was only finally sentenced in 2020.

McNamara, who died in 2016, never saw the final capture of DeAngelo, and her book was finished after her death by several other crime writers and her widower, Patton Oswalt. Her dedication to the case though was admirable, and her trustworthiness earned her an unusual amount of cooperation from the investigating police.

Vulgar Favours is another book that inspired a popular TV show, this time the American Crime Story: The Assassination of Gianni Versace. Orth’s book recounts the run up to Versace’s 1997 murder by Andrew Cunanan, based on hundreds of interviews and innumerable police reports.

Versace’s murder was a sensation at the time, but this is a book about Cunanan, the man behind the crime. Vulgar Favours runs over 500 very interesting, detailed pages. Orth leaves no stone unturned in trying to come to an understanding of the man who ruined so many lives before he ever even got to Versace.

9. The Stranger Beside Me – Ann Rule

In an extraordinary turn of events, writer Ann Rule was working on a big story, tracking an unknown serial killer, when her good friend Ted Bundy was arrested for the very murders that she was investigating. It sounds like the start of a novel, but this is just the beginning of Rule’s very real story.

Rule writes honestly as someone who knew and liked Bundy, and struggled at first to imagine her charming friend as a vicious killer. But as she puts the evidence together and the picture becomes clearer, she gives the reader a chilling and intimate insight into the world of one of the most notorious serial killers of all time.

10. Just Mercy: A Story Of Justice And Redemption – Bryan Stevenson

In the USA, an extraordinary 1 in 3 black men is expected to go to prison at some point in their lives. That is compared to the national average rate of 1 in 15 people, making black men five times more likely to be imprisoned. The very best true crime books should compel their readers to want something to change, and Just Mercy is just that book.

Stevenson, a black man who grew up poor in the South, is a brilliant defence lawyer. One of his first cases was Walter McMillian, a black man charged with a murder that he insisted he didn’t commit. Stevenson guides us through the case and the tangled web of conspiracy and inequality that mire the US justice system. This book will make you angry – and that is a good thing.

The Suspicions Of Mr Whicher is a modern true crime classic, recounting the story of an early sensational murder. In 1860, one of the inaugural Scotland yard detectives, Jack Whicher, is called to investigate the murder of a three year old boy found stabbed at his home. Whicher had many theories as to the identity of the killer and the crime remained unsolved until one of the suspects, five years later, admitted to the murder.

Summerscale’s book is a fascinating look at the real-life origins of the brilliant detective trope, as well as a history of crime and society that goes beyond the tragic death of one little boy.

It may seem an obvious one to end on, but the O.J Simpson story is so engrained in our collective consciousness that it had to come up. Simpson’s trial, which saw him tried for the murder of his ex-wife and her friend and lasted eleven months, was called the ‘trial of the century’, and it was a sensation when Simpson was found not guilty for the crime.

Toobin, a legal journalist, writes a true crime book that reads as well as any thriller, detailing the crimes and then taking us on a tour of the political and legal landscape that gave the trial jury just enough reasonable doubt to declare Simpson not guilty of the murders.

READ NEXT: The Best Kindle Unlimited Books You Should Read