All of these novels do a lot of good. 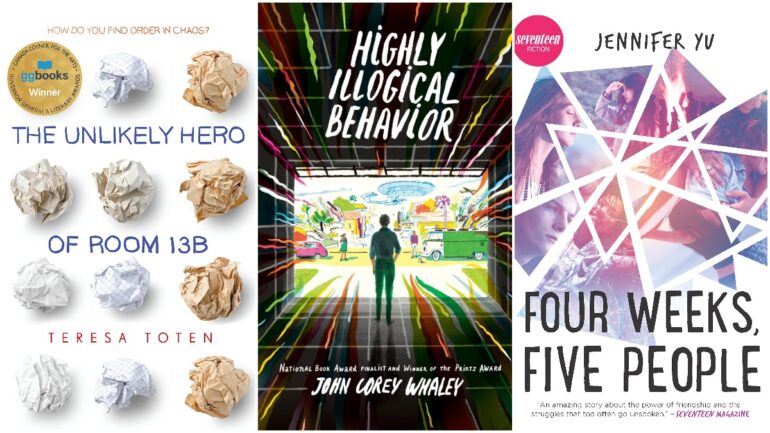 6 Sensitive YA Novels To Check Out For Mental Health Week

It’s Mental Health Awareness Week, hosted by the Mental Health Foundation. The theme of the week this year is reconnecting with nature, and I’ll be back with another article suggesting some books to help you do just that a bit later in the week.

To start though, I’ve rounded up some great YA novels to check out which address several different mental health conditions in many creative and engaging ways. They are YA for a reason too; I’ve found that novels written for younger people just seem to handle these topics so sensitively that anyone can get something good from them. And there is a lot of good to be found in this selection.

(Underneath each book, I’ll briefly mention which topic the book covers, just in case you’d rather not read about anything specific).

1. Darius The Great Is Not Okay – Adib Khorram

Darius Kellner is a half-Persian teen who knows more about fantasy worlds then he does about Iran, where his mother is from. He’s also clinically depressed, taking medication, and having a hard time fitting in at school. When he goes on his first trip to Iran, Darius knows he won’t fit in, just like he doesn’t at home. Then he meets Sohrab, a friend who makes him feel like maybe things could be alright. Better than alright, even.

Darius’ voice is irresistible, with much more humour than you’d expect from a book with such a serious topic, and you will love him. The representation is also immaculate; honestly, how many books are there which feature a teenage boy of colour talking honestly about mental health?

2. The Rest Of Us Just Live Here – Patrick Ness

Patrick Ness is a dependable voice when it comes to YA fiction, and The Rest Of Us Just Live Here is one of his reliably creative works. Mikey is a normal teenager, who is just trying to get through the year at school whilst dealing with severe anxiety and OCD. The scenes with his therapist are some of the best in the book, and so beautifully rendered.

Mikey and his friends are normal kids, with normal kid problems, whilst the story in the background follows the popular kids who are busy playing out the more usual YA fantasy story. It’s a great premise, gently mocking of YA tropes, whilst allowing the focus to be on the kids that these sorts of stories ignore. Kids who are, in some cases, desperately fighting internal battles of their own.

3. The Astonishing Color Of After – Emily Xr Pan

After her mother, Dory, commits suicide, sixteen-year old Leigh is left reeling. When a giant red bird appears with a message for her, Leigh is convinced that the bird is her mother. She travels to Taiwan to find her maternal grandparents, who she has never seen before, looking for some truth, some reason why her mother did what she did.

The magical realism vibe of The Astonishing Colour Of After shouldn’t put you off here. It doesn’t romanticise depression or suicide in any way, treating the subject with care and respect. This is a gorgeous debut novel about grief and mourning, despair and love, and will stay with you a long time after you’ve finished reading it.

4. The Unlikely Hero Of Room 13B – Teresa Toten

Adam Ross is the youngest member of a teen OCD support group when Robyn, a girl who has just completed a residential program of treatment, joins the group. Adam is instantly in love, and wants to be the Batman to her Robin. But he is dealing with his own OCD on top of a mum who has mental health problems of her own, his parents divorcing, and his young step-brother already exhibiting signs of anxiety.

Readers who suffer from OCD themselves say that the representation is very realistic, highlighting the frustration that comes from repeated ritualised behaviours and intrusive thoughts. But The Unlikely Hero Of Room 13B is also a love story, and a very sweet and tender one at that.

Solomon Reed is sixteen years old, and he hasn’t left his house in over three years – not since the day he had an episode at school that had him branded as ‘the crazy kid’. He’s happy with his life, safe from the world that was inducing panic attacks before the incident happened. Lisa Praytor is the only person who seems to remember him, and she plans to befriend Solomon, help him overcome his agoraphobia, and write a paper on the results that will see her into the college of her dreams.

I know what you’re thinking, and you don’t need to be put off by the fact that Lisa thinks she can ‘fix’ Solomon. This is not a story that ‘cures’ Solomon’s agoraphobia; instead, it handles the topic sensitively, and explores how with the right support and acceptance, Solomon can learn to manage his anxiety better than he was. That is a message that we very much need to be sharing.

Five young people meet at a month-long summer wilderness therapy camp. As the list of warnings suggest, the five main characters all bring their own mental health problems to the camp, but fans say that all of the conditions are handled sensitively and there is no romanticisation of mental illness. One of the boys is recovering from anorexia, particularly worth noting as there are so few books that cover eating disorders in men in general.

Four Weeks, Five People is a book about recovery, but fully acknowledges that there is no magical fix-all cure for these teens. The camp gives them new experiences, and they all undergo some character growth, but they are not ‘fixed’ by the end of the four weeks. What they have done is find support in one another, and learned that they are not alone, which is perhaps the most important message of all when it comes to mental health.

READ NEXT: 10 Best Time Travel Books You Should Read