Home
Gaming
Hey, Can We Get Xbox Design Lab But For The Switch’s Joy-Con?
Opinion

Hey, Can We Get Xbox Design Lab But For The Switch’s Joy-Con? 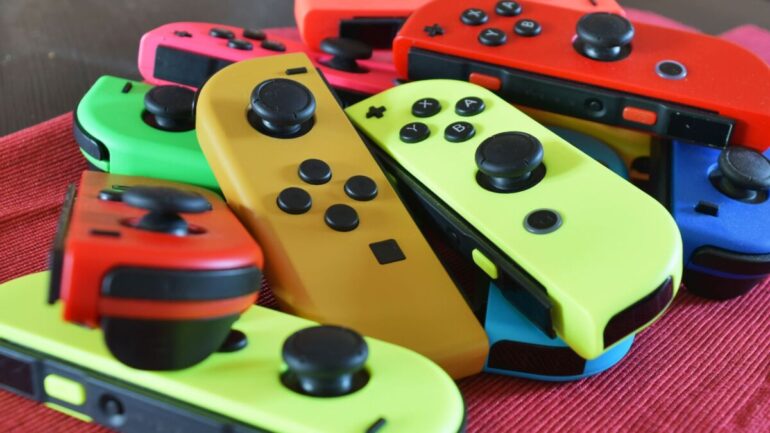 Nintendo’s Joy-Con controllers have long been a point of contention ever since the release of the Nintendo Switch, though that’s largely due to the dreaded Joy-Con drift. Such affliction has finally claimed me too. The left Joy-Con succumbed to drift after just a year, leading to me buying a battery-less Joy-Con for cheaper instead of splashing out for a new pair.

Now, the right Joy-Con is starting to drift, which is strange considering the only game I’ve been playing on my Switch for some time has been Hades. Maybe that couple of hours on Knockout City’s beta finally killed it off. Anyway, it’s time for a brand new set, but looking online for a new pair is like pulling teeth, not just because the Nintendo UK shop seems out of stock for everything, but also because the colour options are lacking.

I don’t mean that the colours themselves are lacking, as there are a decent selection of colours available, but the means to go about obtaining sets of certain colours are completely backwards, particularly in the UK. While in the US, you can obtain both Joy-Con in Neon Blue as part of the same set, in the UK, I’d need to buy a Red/Neon Blue set, then purchase the left Joy-Con in Neon Blue separately, which would cost an extra £35. The official Nintendo website also lists regular Blue and Purple as left Joy-Con exclusive, meaning you’d never get a matching set.

Nintendo just loves offering their consoles and accessories in different colours. Only recently, the company announced that they’d be releasing a new Blue Switch Lite to coincide with the release of Miitopia next month, but right now, they’re failing with their Joy-Con colour offerings. Thankfully, I’m not just sitting on the soapbox telling Nintendo to change without offering some kind of solution, and it comes in the form of Xbox’s Design Lab.

The Design Lab allows players to fully customise their controllers with various colour options and trimmings that’ll let players own accessories that can truly be claimed as theirs. I’m not suggesting that Nintendo fully follow the Design Lab blueprint and offer the option for players to engrave their name/cringey gamertag on the back of their Joy-Con, but the option to pick from any existing colour option for your Joy-Con, with the chance of more colours being added in the future, would be an interesting prospect.

Because Joy-Con are two individual controllers, meaning drift will usually affect them one at a time, a Design Lab feature which allowed for the purchasing of a single Joy-Con would make for a great option to replace broken controllers without forking out for a set you don’t want. Again, I love the Neon Blue look, but I’m not spending £95 just so I have a pair of Joy-Con that doesn’t automatically move the camera downwards whenever I’m playing Astral Chain.

I suppose the issues with the Joy-Con controller and the drifting has meant that Nintendo haven’t been able to offer these options. It’s been rumoured for the longest time that Nintendo are looking to create a Nintendo Switch Pro of some kind in the future, and it’s possible that this would come with an improved or even redesigned Joy-Con. What’s the point in offering a new, customisable option if you’re going to be phasing out the old, broken version?

Either way, there’s likely a good portion of Nintendo fans who would love easier access to peripherals and accessories that speak to them, and this would be a good way to do it, and perhaps cheaper than purchasing two sets of Joy-Con just to get the colour pairing you like. It doesn’t need to offer rubberised grips or chrome control sticks or whatever other bollocks the Design Lab does, but it’s a way to make the Switch experience more personal. The Switch was revealed and marketed as a console you can take with you to parties (remember them?), so custom Joy-Con colours would surely make for the perfect conversation starter.

READ NEXT: The Best Switch Games for Couples