Besides some minor repairs, Wreckfest is one to watch. 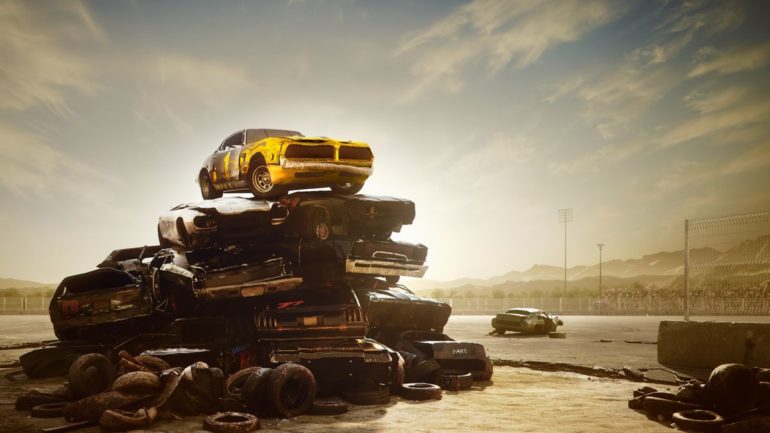 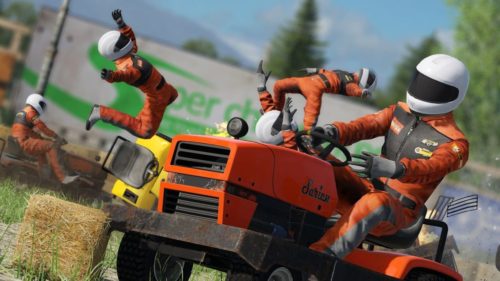 Fair credit to any game that sets its stall out from the get go in the same way that Wreckfest does. One of the first selectable events in the career mode sees 24 drivers compete to destroy each other in a lawnmowers only derby to the death. From minute one, Wreckfest’s message is clear: let’s have a bit of fun.

The latest destruction derby game from Bugbear Entertainment, who are the former developers of the FlatOut series, Wreckfest isn’t necessarily concerned with proper racing lines or making sure you kiss the apex on every corner. Sure, those elements will help you earn faster lap times, but following a racing line is kind of hard to do when 23 other racers are breathing down your neck, eager to smash you off the road at any given moment. Rubbing is racing here, and racing in Wreckfest is good. Really good. 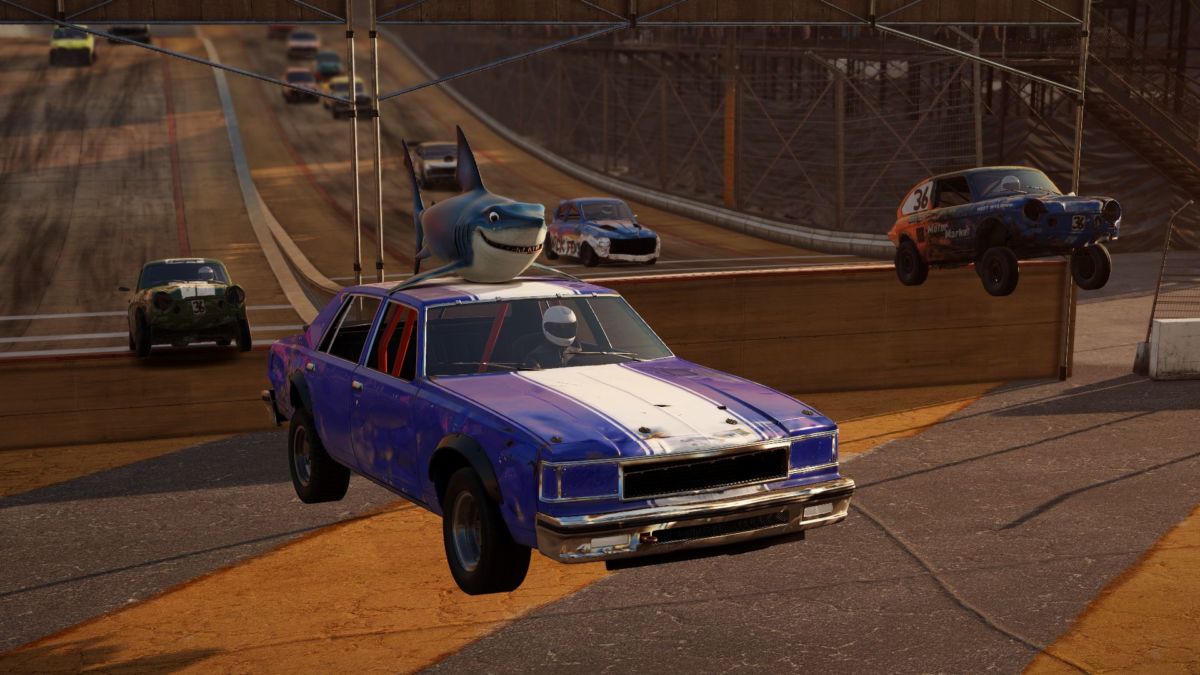 A spiritual successor to FlatOut, you could consider Wreckfest to be a toned down version of Bugbear’s original game, as Wreckfest only focuses on the vehicular carnage. There aren’t thousands of destructible items littering the track causing you to crash right before the final corner, there’s no nitro boosting, no “street” racing and no minigames where you launch your driver at high speeds. I’ll be honest, I miss those minigames, but Wreckfest definitely feels more focused with their absence.

Like most current driving games, Wreckfest features a customisable difficulty setting that allows you to tinker with the in-game handling. Safety features like ABS and Traction Control can be turned on, off, or a half setting in between. The half setting is probably the most fun, walking the line between the “slow in, fast out” turning mantra of conventional racing and being able to just throw the car around corners and being rewarded with a sweet drift.

Players can tune their cars between races, though it’s a simplistic set of 4 sliders with five settings each. You can tinker with the suspension, gear ratio, brake bias and differential to maximise your car’s efficiency on a per track basis, and before each event, you’re given the layout of the track and a breakdown of the track’s materials (i.e. tarmac, dirt, gravel etc.), allowing you to modify your car on a per-track-basis. Considering the tuning isn’t as intensive as something like Forza, there’s no reason not to get stuck in.

Players can also decide if they want damage to be set on normal or realistic. Normal stretches the boundaries of realism to the degree that your car can still function pretty well even if half the car has been bashed in and you’ve crashed into a wall at 60 mph, while realistic is a lot more punishing. One crash or high speed collision with another vehicle could end your entire event. It’s not for the faint of heart. 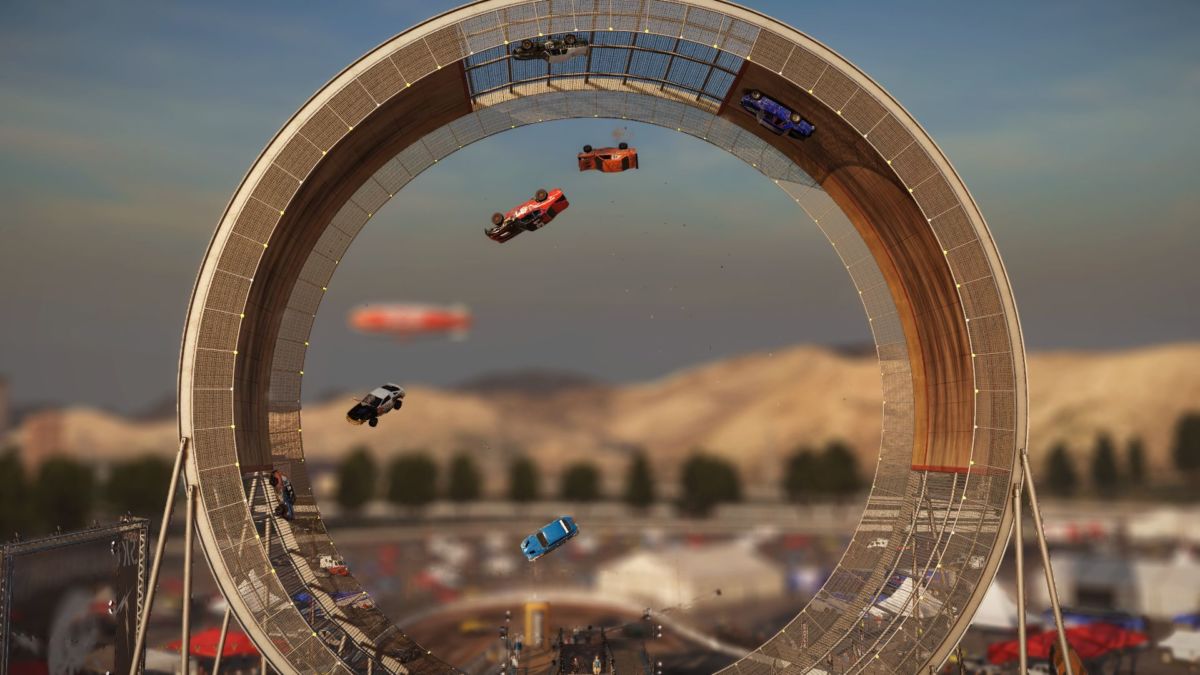 Instead of racing through lumber mills, city sewers and desert outposts in open-ended tracks littered with shortcuts like in FlatOut, Wreckfest offers a closed circuit experience in mostly rural environments, with some stadium tracks and one city race. Just the one, mind you, and it has barriers lining the track so you won’t be crashing through a shop window to shave seconds off your time.

The closed circuit approach and focus on vehicle destruction instead of environmental destruction makes Wreckfest feel more skillful and rewarding. There was an unpredictability that came with FlatOut, as pieces of debris that littered tracks would either pass underneath you with no consequence or cause you to triple barrel roll into the nearest wall, with no consistency either way. 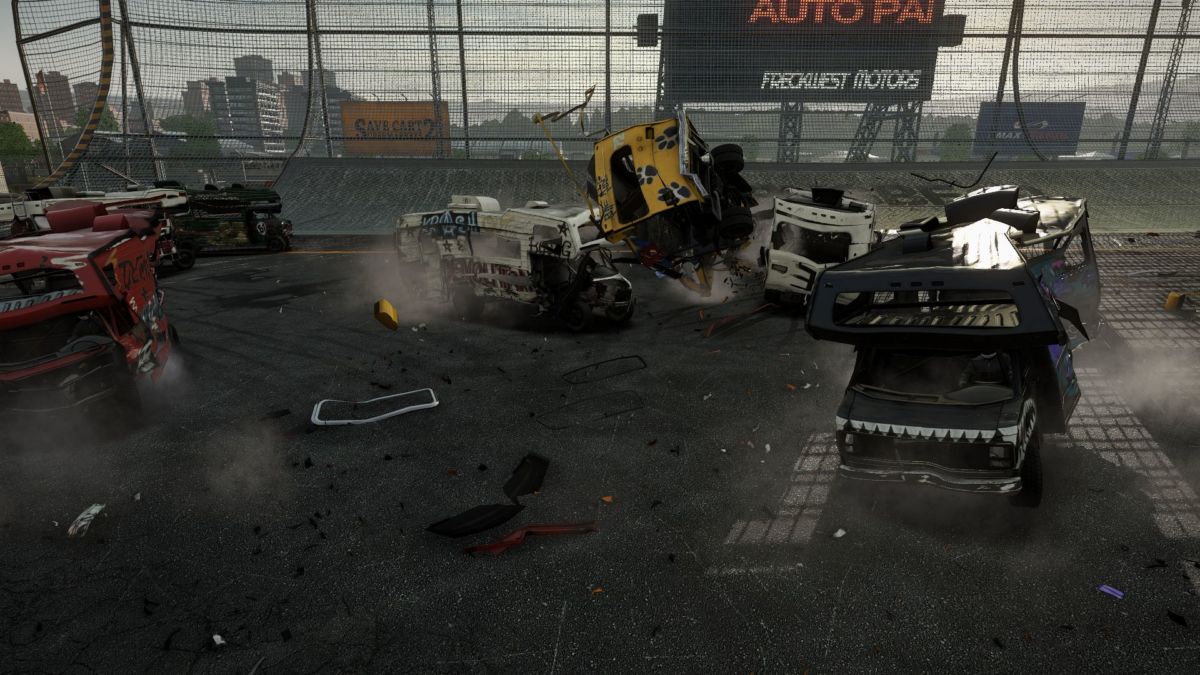 Here, you don’t feel like you’ve been cheated out of a victory, as your mistakes are often your own or the result of an aggressive racer, which is fair game. It’s called Wreckfest after all, not “Cheerful Sunday Drive With Friends”. There’s been a couple of races that came to an unfortunate end thanks to a silly mistake or an opportunistic PIT maneuver, and it’s the fact that the AI is so openly aggressive that makes the game feel rewarding when you win. Being able to battle through the chaos to snatch first place is a thrilling experience.

Most racing games tend to get boring when you’re in the lead, as the race settles into the usual routine of tackling the same set of turns over and over again, unopposed. Wreckfest’s focus on aggressive racing and tracks that emphasise destruction generally makes the game more thrilling for the whole race, not just when you’re battling through the pack. One poorly timed approach at a figure eight intersection could cost you the entire race. 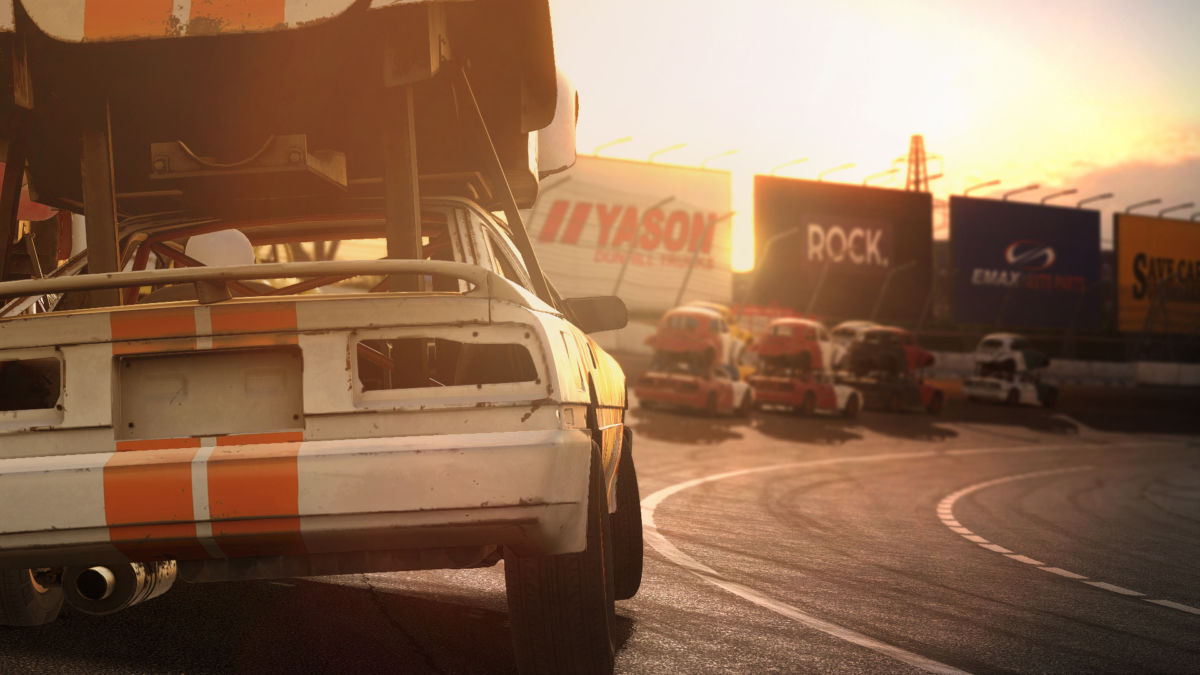 The best defense to the AI’s aggression is a good offense, and Wreckfest actively encourages you to be the one causing the destruction, with optional challenges and generous EXP rewards for being the aggressor. There’s even more to be earned if you hit your rival, who gets assigned to another racer if they shunt you hard enough. Levelling up unlocks new tiers of upgrades and vehicles to purchase, so it pays to be the reason why your fellow racers keep visiting the local mechanic.

It’s arguably the track design that is Wreckfest’s biggest strength, as the majority of tracks often have multiple crossing points where carnage is rife. In these tracks, known as Banger Races, victory and defeat are never quite certain, and it’s a magic that doesn’t translate as well to the more traditional tracks on offer, which Wreckfest refers to as Folk Racing. 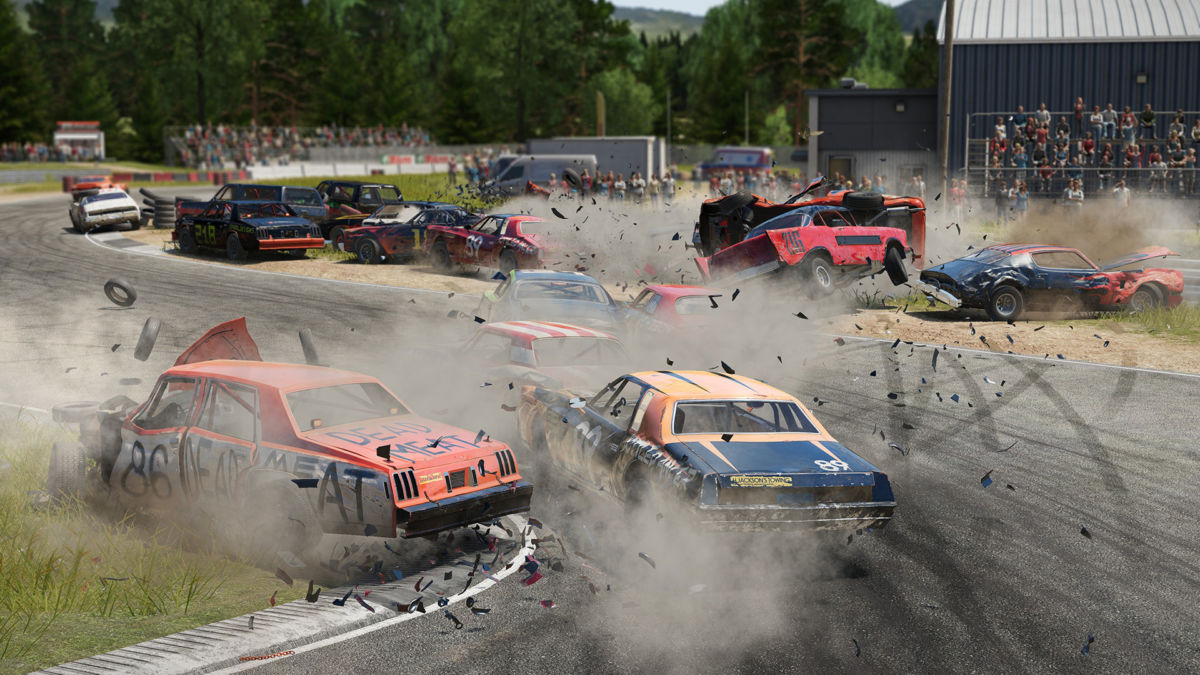 The hostilities are still prevalent, but there’s less opportunity to act on them as you’re following a normal track layout, which makes the race less interesting. Occasional outcroppings can be used to slam opponents, but it often feels like these races punish you for focusing on wrecking racers, as you’ll usually waste more time than you’d gain for taking out the competition. It can be frustrating too when the optional challenges for these tracks ask you to wreck someone in a traditional six lap race, which isn’t an easy feat to pull off naturally.

The Career mode consists of five championships, within which are several events that grant you points. Earn enough points by placing highly in these events and you’ll be able to move on to the next series, where the cars are faster and the events are longer. The events themselves can range from themed challenges, such as the aforementioned lawnmower derby deathmatch, along with multi-race events and race day events with qualifying heats. 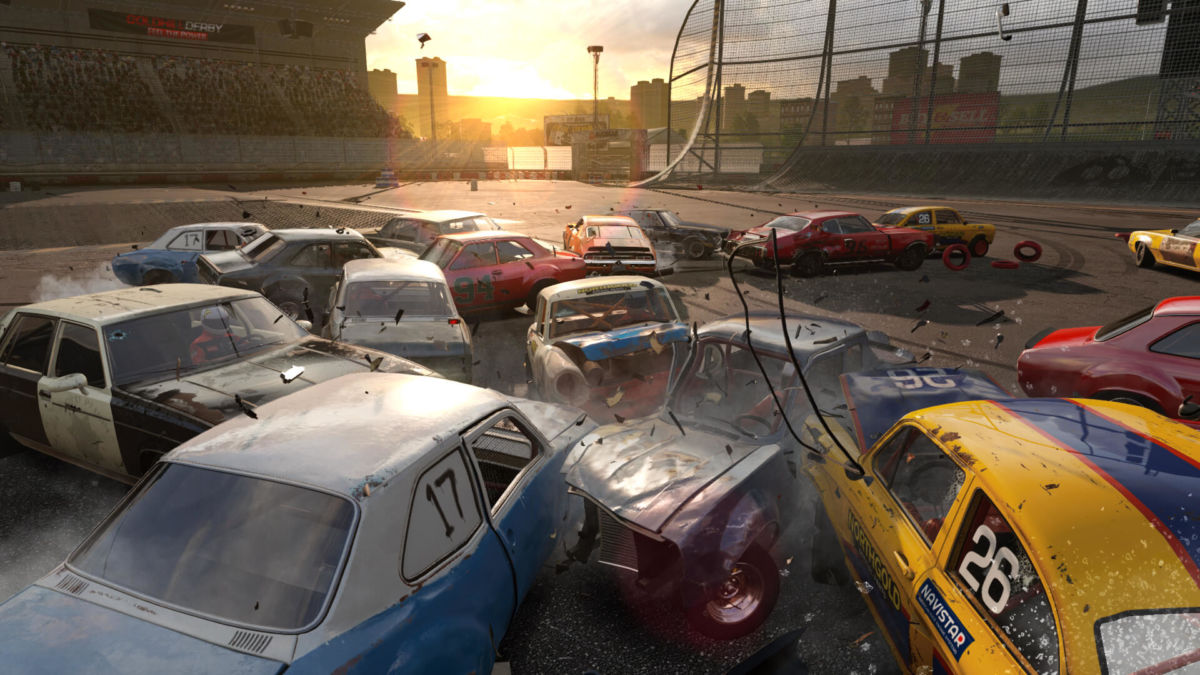 The wide range of event types helps to keep the career mode fresh, though I’d be lying if I said I didn’t immediately scope out which events focused on destruction, like the derbies or Banger Races, or the themed challenges over the traditional Folk Racing. Again, Wreckfest is at its best when high-speed metal machines are ramming into each other.

The events sometimes have restrictions on them, like you can only use cars of a certain class, type or nationality, but generally speaking you’ll unlock enough vehicles to be eligible for most of the game’s events. However, your earnings and upgrades apply to single event races outside of career mode and the multiplayer, so if you do encounter a roadblock, a couple of non-career races should set you straight. That said, the fact you can’t sell unused vehicles or upgrades to raise any necessary funds to purchase eligible cars will make these situations more of a pain if they do occur. 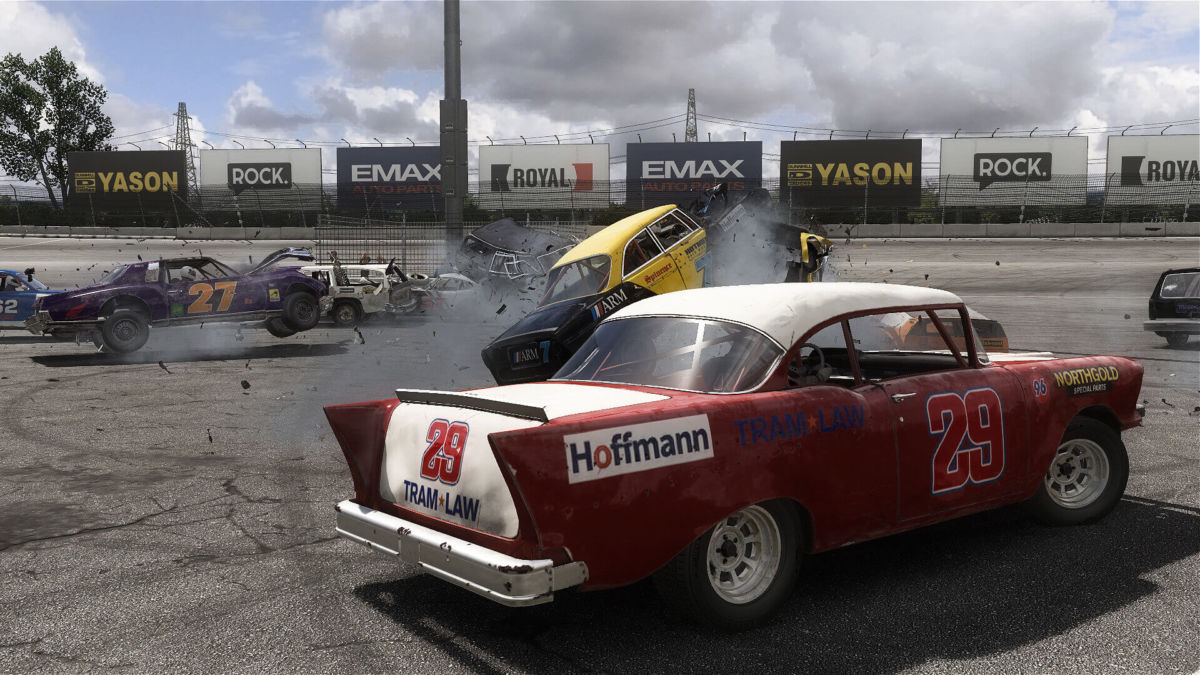 The online multiplayer is divided up into different divisions, with servers dedicated to Banger, Folk, Special and Mixed racing. While I only managed to get a couple of online races in pre-release as the servers were only up for a short time, the game ran smoothly with only a couple of hiccups, though I’ll be playing the game online on release day to make sure.

Aside from the issues with Folk Racing as compared to Banger Racing and derbies in general, Wreckfest could do with some more environments. As mentioned, the variety of tracks on offer, and specifically their design, is fantastic, but there’s only so many forests, stadiums and open fields you can stomach. Perhaps some snow areas, or a desert environment, could make things more diverse.

Beyond that, there’s a decent amount of car customisation in the game that allows you to add paint and liveries to your car, but there’s nothing in the way of rider customisation. It’s a small feature that’s obviously going to be way down on the list of added features, though seeing drivers that aren’t wearing black racing suits with white helmets would make for a nice touch of personality.

On a more serious note, a pre-launch patch has changed the UI completely, leading to some weird graphical glitches on both the menus and victory screens, and the loading times can be fairly long. Plus, the game simply refuses to start when my Turtle Beach headset is plugged in to the back of the Xbox One, which I’ve been informed is something neither the developers or publishers have encountered. Hooray for being unique, I guess, but consider this a heads-up if you are planning on buying the game.

There’s still a lot to love about Wreckfest, glitches notwithstanding. Bugbear have once again proven they’re the rulers of destructive driving games with arguably their best effort yet, stripping away the unnecessary parts of their previous series and focusing on what works. With a season pass and plenty of free content updates planned, along with some much-needed patches, Wreckfest is only going to get better and better. 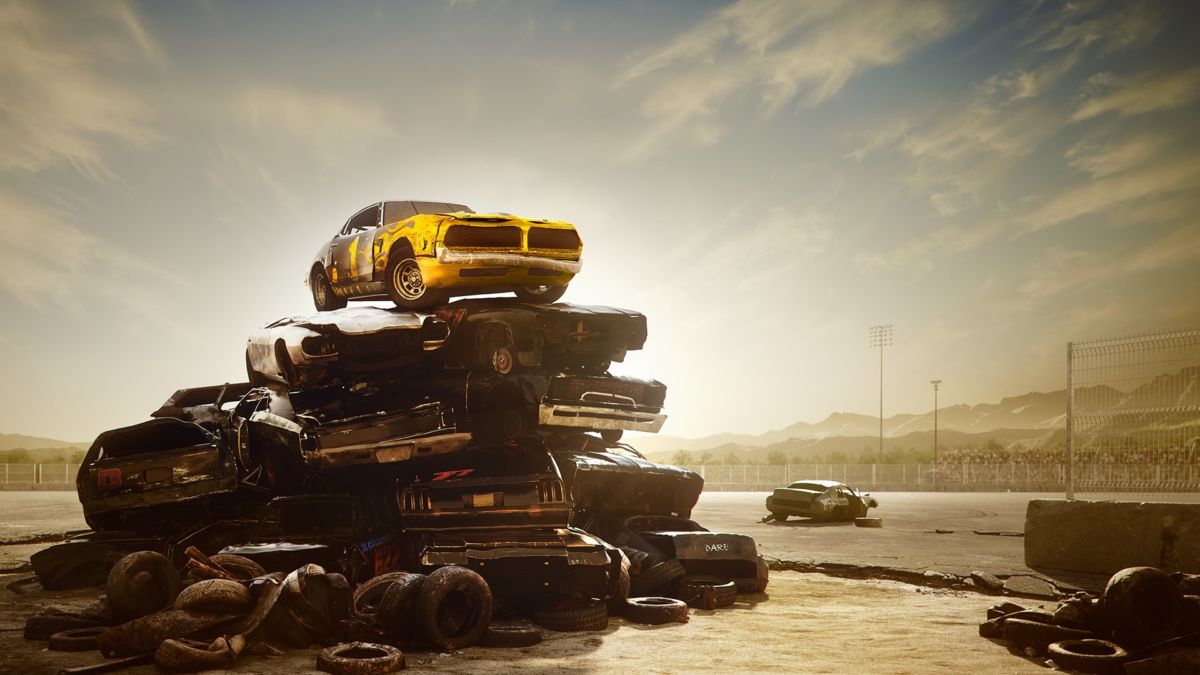 Verdict
While Wreckfest is technically a simulation racer, it isn’t concerned with accurate engine tweaking or proper racing lines, and it's all the better for it. Glitches aside, the focus on vehicular carnage makes for a fulfilling racing experience.
8
Cultured Vultures is a pop culture website established in 2013 covering all things gaming, movies, and more. We eat your words.
All The News On The Biggest Games