Youngblood tries to get a slice of the homogenised gaming pie with systems and mechanics that feel completely alien to Wolfenstein. 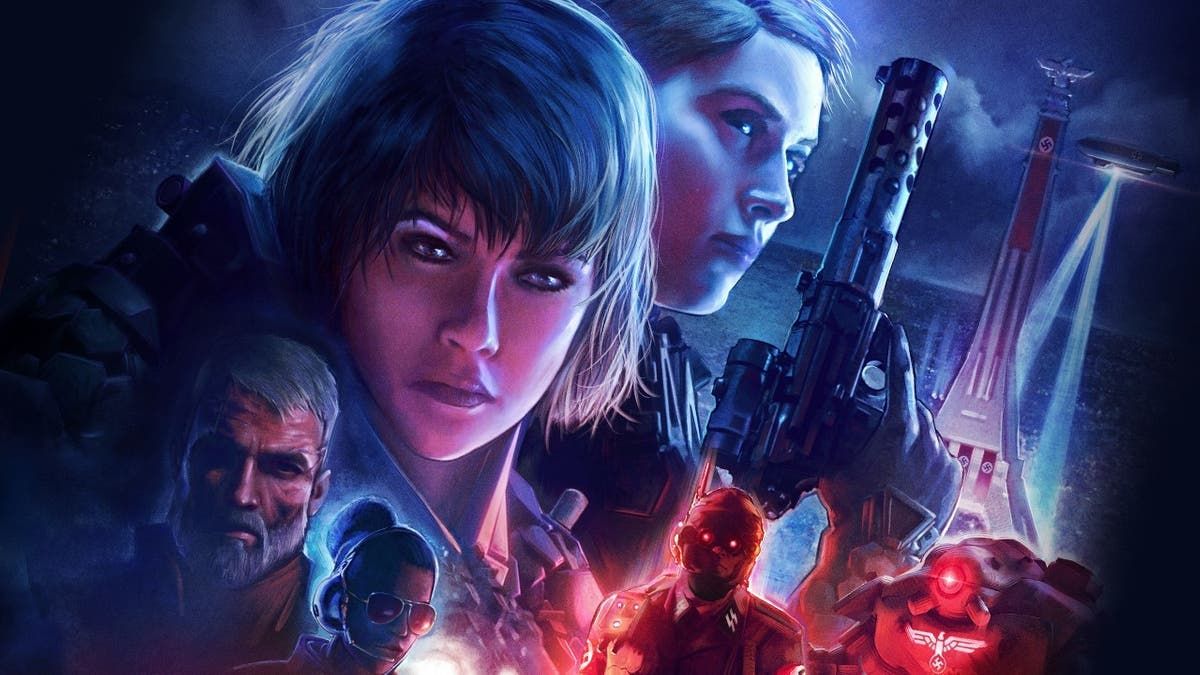 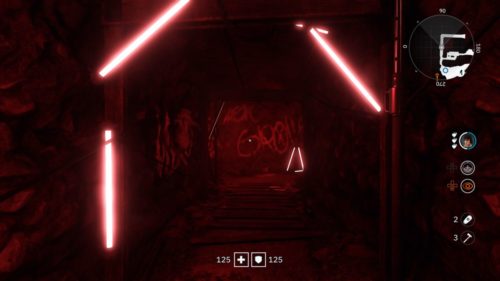 Available at a budget price and released a relatively short time after The New Colossus, it’s difficult not to perceive Wolfenstein: Youngblood as an experimental stopgap before the next mainline game. Not only does series protagonist BJ take a backseat (probably one with very favourable cushioning at his age), but it also tiptoes away from the formula to test the waters for something that doesn’t really feel like Wolfenstein. The franchise staples are all here — Nazis, guns, explosions — yet Youngblood seems to so desperately want a seat at the crowded live service table that it forgets what made the Wolfenstein renaissance so beloved to begin with.

You play as either Jessie or Zofia Blazkowicz with a co-op partner or the AI playing the other sister. BJ’s daughters are a pair of goofs, like the female version of Beavis and Butthead. It’s an admittedly nice change of pace from the morbid BJ, though neither of them feel quite well developed as characters. They constantly snort and joke around for light relief, one of the game’s standout moments coming when they get their first kill only for Zofia to puke and then laugh it off. If it’s moody muttering you want, these girls won’t provide it. 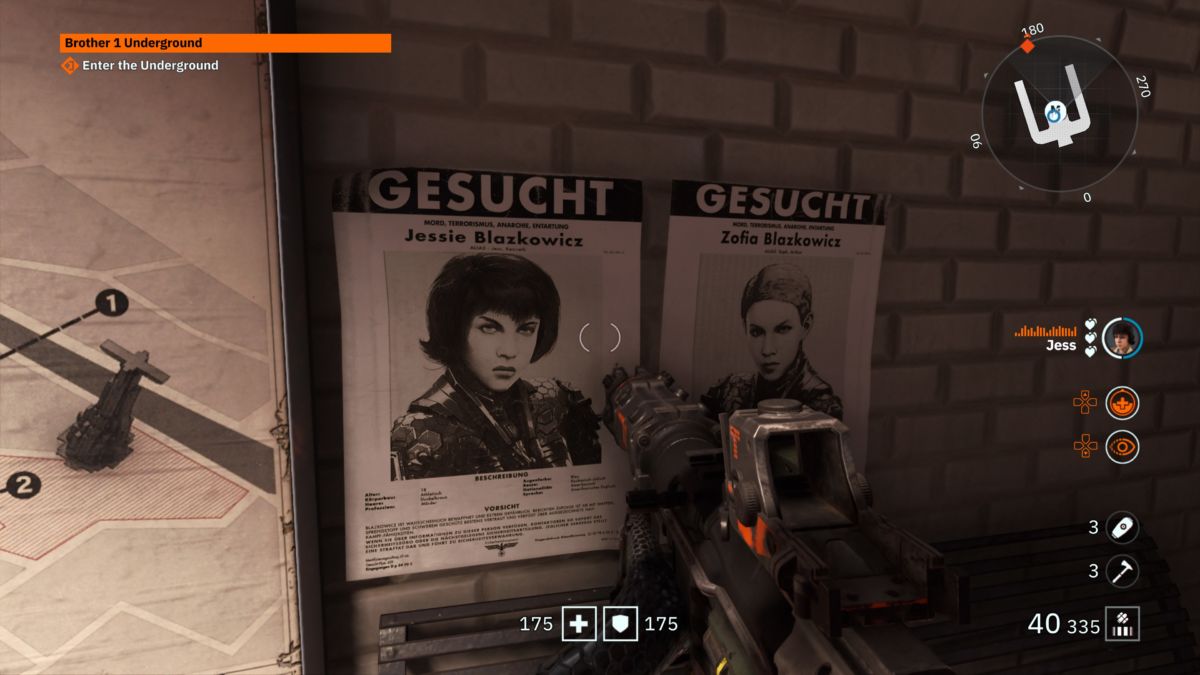 Geared up in Da’at Yichud Power Suits, the pair set off on a mission to Nazi-controlled Paris to track down their AWOL father. After joining the French resistance, the sisters must hone their craft by taking on missions before eventually working their way up to “Brother” compounds, which basically take the form of short raids. That’s about all there is to mention of the plot: the beginning and end offer some fun cutscenes, but the middle really sags as you dive into the grind of levelling up and ticking things off your list.

Youngblood drops the linear, concentrated approach of The New Order and The New Colossus for something that feels closer to an open world game with RPG-lite elements, often to its own detriment and without much justification. From your underground HQ, you can travel to different environments in Paris where main missions and side missions await, all in the name of grinding up enough to take on the Brother bases. 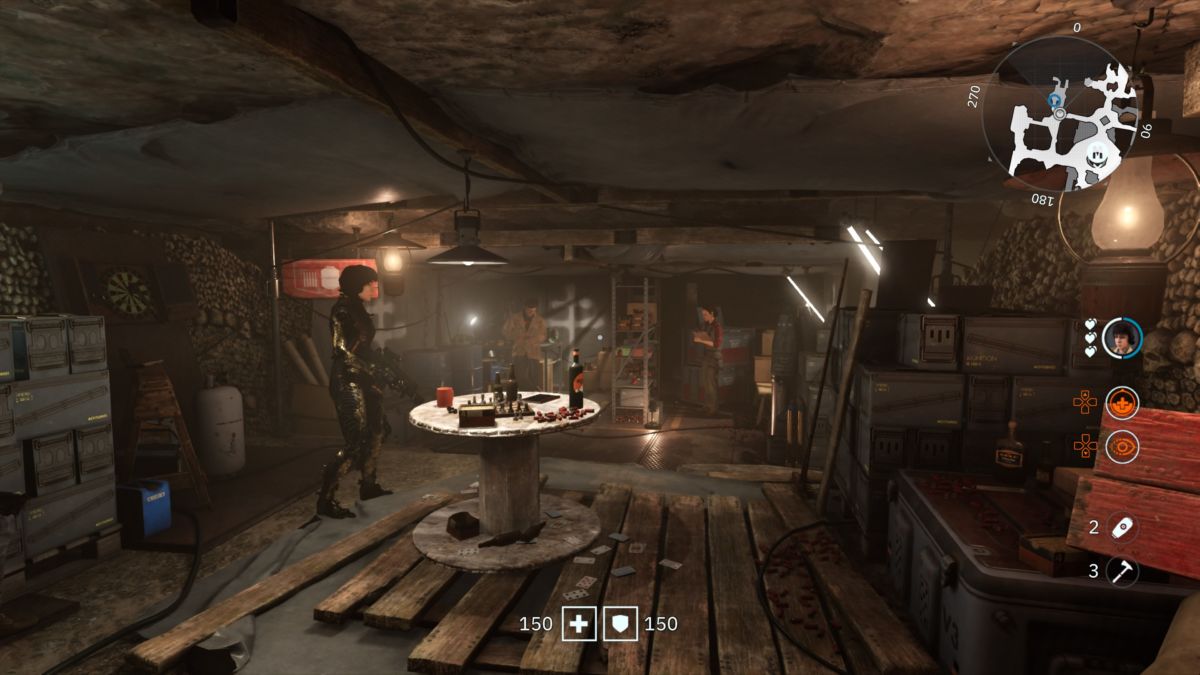 From playing with AI, friends, and randoms, it’s actually the AI in Youngblood that may be the most dependable, which isn’t a dunk on other players. It’s purely because you can slightly customise the AI sister with a “Pep” to compliment your own in the middle of battle. These Peps are gestures that the sisters do to each other that grant buffs, such as health and shield. The sisters also synergise in another interesting way with “Shared Lives”. If a sister goes down, the other must pick them up or lose one of three Shared Lives. If all three are depleted, you must start over from the last loading screen. Considering that the engagements in Youngblood can get absolutely chaotic and long-winded, it can be quite devastating to have to start all over again with the ammo that you died with.

Ammo always feels in short supply in Youngblood, which is down to its bizarre approach to ammo effectiveness against certain enemies — you can’t just sprint up to anyone with a shotgun and blast their head off anymore. Though this system is great at making you use your full arsenal, it’s beyond odd that a simple pistol is better at dispatching hulking robots than a gatling gun, which is something that I could never get my head around. Wolfenstein is all about the power fantasy with expressive, empowering violence, so for Youngblood to limit that feels like a change for the worse. 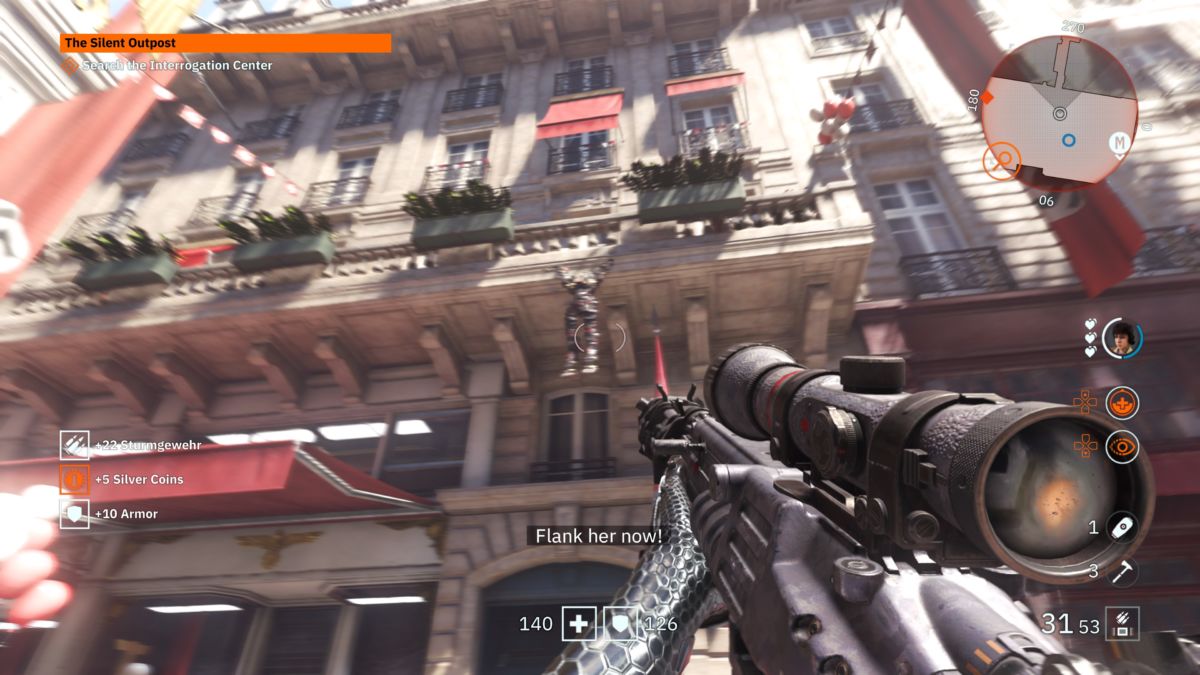 Youngblood also makes a meal out of most engagements by giving enemies significant health bars and levels, not unlike a looter shooter. If your level isn’t as high as your enemies’, you’re going to be in for a tough time, but it becomes pointless once you match their level. For whatever bizarre reason, enemies autoscale with your level, so if you have been working towards a level 25 mission but eventually reach level 30, the enemies will match you instead of staying the same. This makes levelling feel utterly redundant beyond a surface level (heh), especially as you rarely feel like an out-and-out Blazkowicz badass and dispatch of enemies with ease.

It’s a shame because on the rare occasion where you feel totally empowered, it’s an utter FPS joy. Your abilities allow you to dash around like a hatchet-chucking ballet dancer and double jump into the air before raining down hell. Alongside Respawn and id, MachineGames are probably the best in the business at making a PC-centric shooter feel fluid on a controller and Youngblood retains that thrill on the sticks. Therefore, why they opt to slow things down with almost obnoxiously robust enemies that feel straight out of Destiny is a mystery. 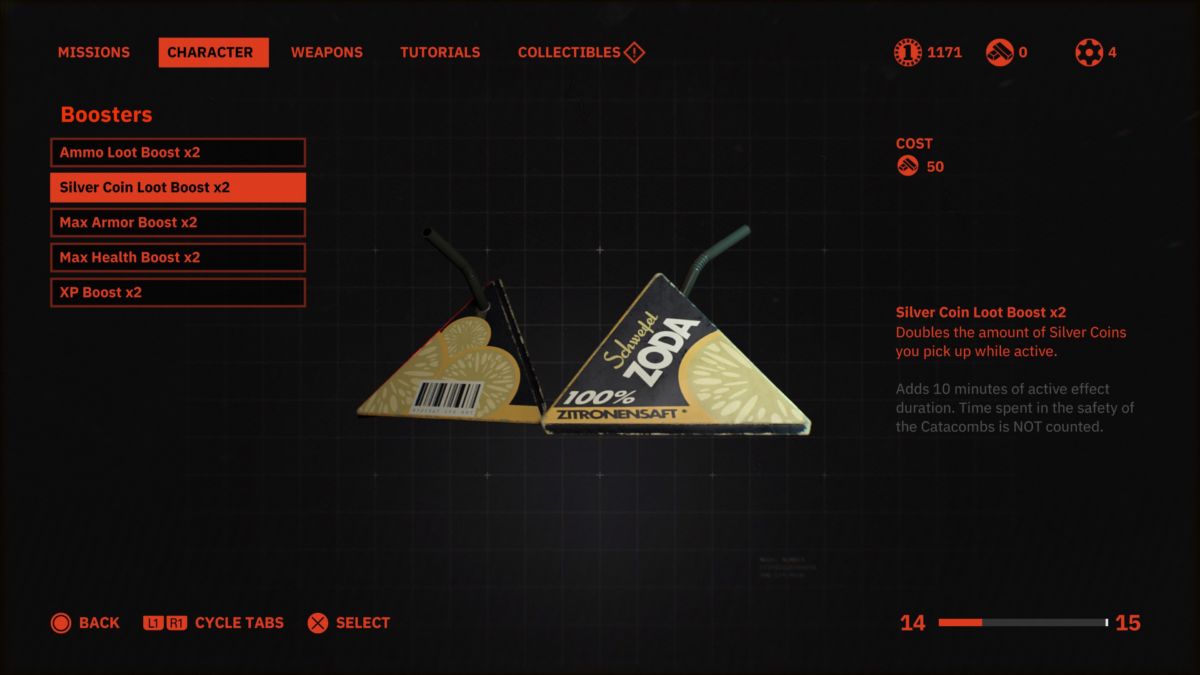 Gold Bars can be spent on cosmetics suits for the sisters and also for in-game boosters to help you level up faster.

Therefore, the microtransactions in Youngblood could be considered pay-to-win, though it isn’t PVP.

This is not helped by the game’s stop-start progression system, which gives you level after level early on but really starts to turn into attrition once you hit roughly 35. You gain an upgrade point per level and for completing some missions, but seeing as how later upgrades can cost six points, it can take its sweet time to get to the good stuff. You can also improve your impressive arsenal with plenty of different options to drastically alter how your weapons perform and handle with silver coins, which are found dotted around and as mission rewards.

Finding other players is relatively easy in Youngblood, but the Deluxe Edition code I was supplied with also allowed me to invite my friends without them having to own the game in a similar fashion to A Way Out. From what I could gather, your friend does the same amount of damage as you even at a lower level, if not more. The only real difficulty is that your friend will not have the same amount of armour and health, so they are likely to go down quickly. There’s not much need for strategy in co-op beyond constantly buffing each other and concentrating fire on the big guys, so Youngblood is something that you can play with an FPS player of any experience. 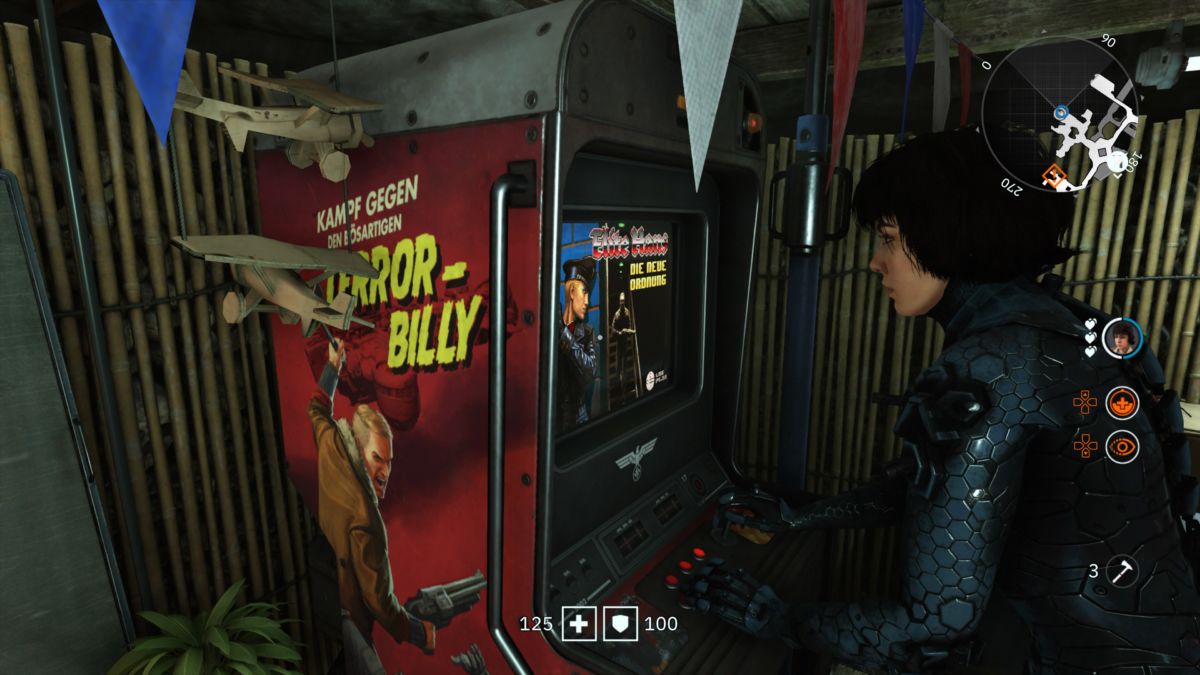 Though it only took me about twelve hours to dust off the main missions, there’s a surprising depth of content here for the completionists, especially so for the price. Collectibles are scattered far and wide across Paris and there are also recurrent mini-missions that keep popping up like the busywork in Fallout 4. The upgrade system is also fairly deep — I only unlocked about two thirds of them despite having dusted off the campaign. Heck, there’s even an original Wolfenstein cabinet in the underground HQ that you can grin your way through.

Despite all this content and the polished gunplay, Youngblood still feels like a change to the Wolfenstein DNA that’s chasing trends more than what the series needs. There’s a sad irony in the fact that The New Order was so refreshing as it didn’t rely on tired modern FPS conventions like cover shooting and regenerating health, yet here’s Youngblood trying to get a slice of the homogenised live service pie with systems and mechanics that feel completely alien for the franchise. The modernisation is completed by microtransactions and challenges that refresh over time, both of which couldn’t feel more shoehorned in if they tried with the former even giving you significant help thanks to paid boosters. Much like Far Cry: New Dawn, Wolfenstein: Youngblood is an experimental entry that is testing the waters for a future that strips the franchise of much of its identity.

Verdict
Even if its gunplay is fluid and its new protagonists offer a nice change of pace, Wolfenstein: Youngblood forgets what made the previous games so enthralling to chase trends that betray the Wolfenstein DNA to its own detriment.
6.5
Buy on AmazonBuy on Humble