Far Cry New Dawn is an interesting experiment for the franchise that might tide Far Cry fans over for the time being. 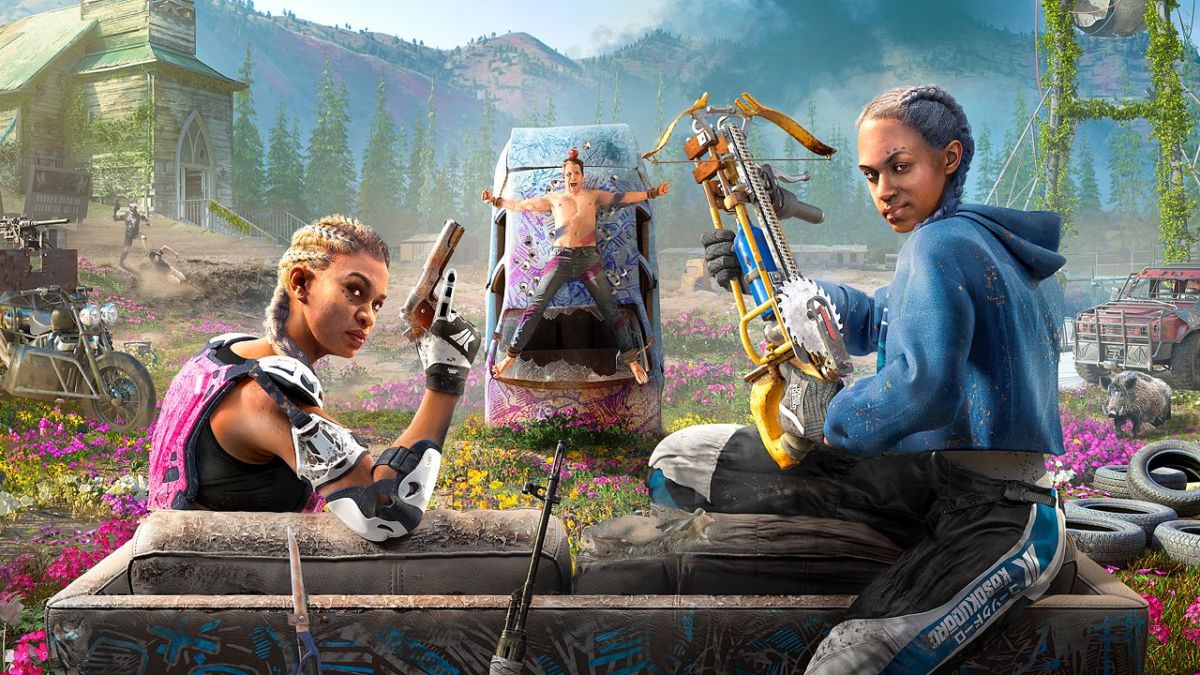 Far Cry New Dawn is not a grand revolution for the series, though it would have a hard time being so with such a quick turnaround from Far Cry 5. A direct sequel to that game, New Dawn dabbles a little with the Far Cry formula without ever significantly pushing it forward. Rather, it feels like a conservative experiment for the future of the franchise, a working concept rather than a fully-fledged follow-up, which is reflected in its lower price tag and shorter playtime.

You return to (a far pinker) Hope County following the events of Far Cry 5. Almost two decades have passed since the bombs fell, leaving small pockets of survivors to try and rebuild civilisation while bandits do the opposite. You best believe that there’s an omnipresent antagonist to contend with this time out (is it really Far Cry without one?), but with the slight twist that the big bads take the shape of a pair of twins at the head of the Highwaymen bandit group. They rank somewhere low compared to other Far Cry villains, never really being more than just a couple of petulant annoyances with rote catchphrases and bad attitudes.

The twins make themselves known early on when they derail your Hope County bound train. You’re the Captain of Security for Thomas Rush, a pioneer who’s trying to rebuild the world one settlement at a time. Just like Far Cry 5, you play as a voiceless character with zero personality, which makes your interactions feel alien and hollow. For all of the criticisms levied against the likes of Jason and Ajay in previous Far Cry games, at least they were more than just blank slates for other characters to talk at.

Once the prologue is up, you arrive at Prosperity in Hope County and begin to try and reclaim the land from the Highwaymen. The map will be immediately familiar to those who have played Far Cry 5 as it’s ultimately just a more condensed version with a pinker hue and some cars stuck halfway into the ground. There are some other little details, such as old haunts now being destitute, but New Dawn bizarrely doesn’t feel all that post-apocalyptic. The world’s end is seldom mentioned and it’s never really used for much beyond a palette change, which is odd. Perhaps the developers were trying to avoid veering into clichés, but the “feel” of New Dawn is somewhat underwhelming as a result, especially when compared to the also recently released Metro Exodus.

The most significant overhaul to New Dawn from 5 is a greater emphasis on loot and a lightweight tier system that feels heavily inspired by Assassin’s Creed Odyssey and the direction that franchise in general is taking. All weapons are now tiered based on rarity with common weapons as effective as blowing bits of paper out of a straw when against the game’s tougher enemies, again with their own levels. The usefulness of your gear is determined by how well you’ve upgraded Prosperity, so if you have upgraded your Workbench to level two, you will be able to use level two weapons, and so on.

This fairly radical change may leave some cold as it seems to go against the Far Cry philosophy: expressive violence in an open world with few restrictions. Far Cry has always been a franchise, to me at least, that should not be a “heavy” experience: you arrive in a troubled region and become a misguided messiah with big guns who may end up doing more harm than good. New Dawn’s approach, meanwhile, is far more linear with you needing to complete many side missions and do some grinding before you can make significant progress at a couple of points in its story. This adds more hours to the experience, but it simply doesn’t feel like Far Cry — not every big game needs to be a loot shooter with RPG-lite systems and floating damage numbers.

The upgrades are where the true grind comes with Far Cry New Dawn, everything being tied to ethanol, which is basically the currency of the new world. You need it to improve your base to unlock better gear, but can only get it from completing side activities, such as liberating outposts, with more ethanol being rewarded the bigger the challenge you take on. It’s not then as simple as just selecting the weapon you want as you also have to make sure you have all the necessary nuts and bolts to craft it with the better weapons requiring potentially hundreds of each material. It took me twelve hours to dust off the New Dawn story, but without this kind of padding (or if I’d just purchased some “Far Cry Credits” for some of the weapons and vehicles) it would have been far, far less. That being said, there’s a good amount of content here for those who don’t mind the grind with the treasure hunts probably being the most engaging side activity.

It’s important to mention, despite my grievances, that I had a tonne of fun with Far Cry New Dawn once it finally started to open up a little. The gunplay is as tight and satisfying as ever, which has always been one of the most underrated features of the Far Cry games. The companion system also makes a welcome return with some faces new and old, and yes, there’s a new dog who can ride in the car with you this time and he is indeed the best boy. As annoying and generally unreliable as some of the companion AI is, it’s hard to resist the hilarity of their stupidity sometimes. One companion decided to leap out of a boat and get battered (heh) by mutated fish while another stole my helicopter and couldn’t compute how to land it, leaving me to shoot them out and watch as their body lazily fell to the ground. The madness of the random encounters has also been pared back a bit from 5, meaning that you can now move forward by more than five metres without a skunk fighting a bunch of bad guys and then suddenly also a bear.

I seldom make this a feature of any of my games coverage, but it’s hard to overlook just how sumptuous Far Cry New Dawn can look at times when playing on a PS4 Pro with “4K” and HDR, the character models looking insanely detailed and every horizon worth setting as your desktop wallpaper. Similarly, the voice cast are impressive in their delivery and the story goes to some interesting places despite being undeniably silly — if you thought burning weed fields with dubstep playing in the background was a bit on the nose, New Dawn is something else entirely.

There’s plenty of enjoyment to be had with Far Cry New Dawn when it’s just being Far Cry, so it’s just a shame that the overall product suffers from the adoption of mechanics that it really didn’t need and monotonous padding. Where the franchise goes from here is an interesting question (especially with the events of 5 effectively backing it into a corner, as well it the series just being a little overexposed in recent years), but New Dawn might provide an enjoyable but inessential distraction until then for series fans.

Verdict
Far Cry New Dawn is an interesting experiment for the franchise. While it borrows some mechanics from the Ubisoft family that feel out of place and suffers from frustrating padding, the core Far Cry experience might be enough to tide you over once it finally gets going.
7